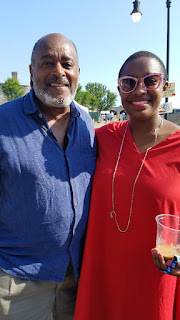 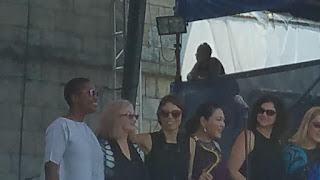 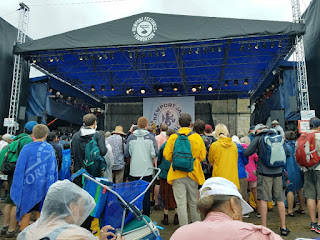 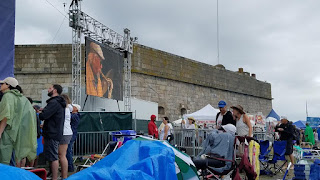 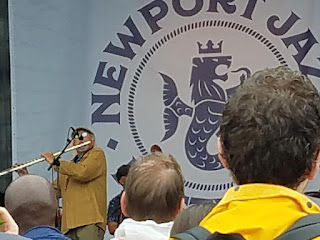 Charles Lloyd shows his multi-faceted talents on the flute 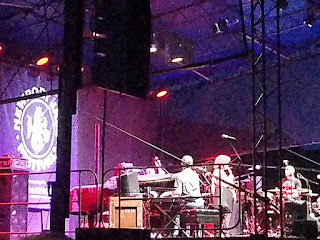 Pat Metheny plays his eponymous hit composition James on Opening Night at the International Tennis Hall of Fame, site of the first Newport Jazz Festival in 1954 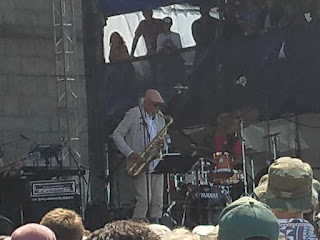 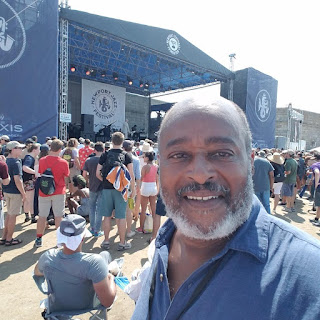 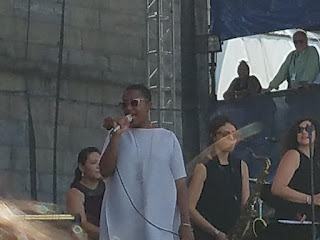 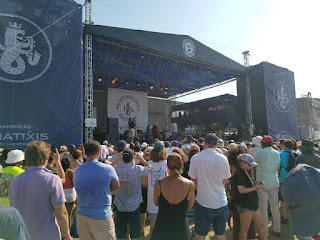 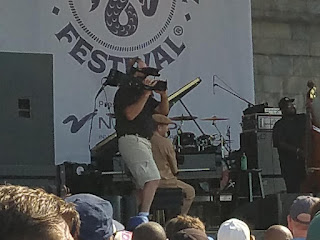 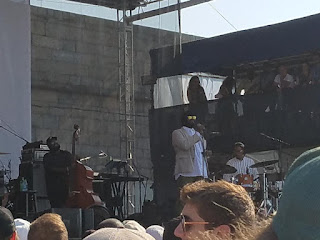 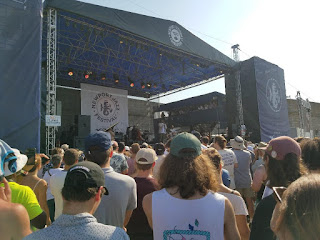 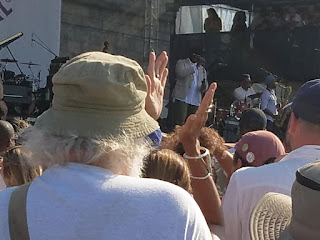 Like a painter digging deep into his palette of oils and water colors, newly-appointed Artistic Director Christian McBride extracted a 2018 Newport Jazz Festival program that showcased the full depth and breadth of the musical genre in a kaleidoscope of colors. Legendary lions bellowed from the caverns of time; the guitar great Pat Metheny on Opening Night at the International Tennis Hall of Fame, site of the original festival in 1954, and Charles Lloyd, celebrating his 80th birthday in a trio of settings, and rising stars such as teen wunderkind Matthew Whitaker and the scintillating baritone Jose James streamed across the Newport Bay sky like so many multi-colored musical fireworks. This was no artifice, but the referencing of a skilled hand presenting a weekend calendar of artists designed to please both the seasoned aficionado and the jazz neophyte alike.

Guitar master and musical icon Pat Metheny began the Opening Night concert on the International Tennis Hall of Fame stage on a contemplative note, expressively improvising on solo guitar before launching into one of the most inspired sets witnessed by this reviewer. He was backed by a stellar ensemble of celebrated composer/musicians in their own right (Antonio Sanchez, percussion, Grammy Award Winner, Best Soundtrack and Golden Globe nominee for the soundtrack to the Oscar-winning film Birdman in 2014; Malaysian/Australian composer Linda May Han Oh doing a soaring turn on Bass and British pianist and composer Gwilyn Simcock with his surging improvisations). Metheny closed the set with a solo turn on his custom made Pikasso acoustic guitar. He returned to perform the next day on the main stage in driving rain, yet he delivered an electrifying set that rivaled the hurricane level wind and rain with his intensity.

At Opening Night, the esteemed young baritone Jose James appeared inexplicably in a retro getup reminiscent of either Jimi Hendrix or Prince. The unfathomable wardrobe reference appeared to have little to do with the subject of his concert, a musical tribute to composer and singing artist Bill Withers. It was particularly baffling since through his entire career as a performer, Withers eschewed any trappings of the popular recording industry. In fact, his memorable, quietly soulful hits (Grandma's Hands, Hello, Like Before, among many) were, by design the very antithesis of the commercial pop/funk/soul that dominated the music scene at the height of his career.

After a somewhat faltering start, James's gained his vocal footing and his performance acumen accelerate. He gave a blistering performance of Grandma's Hands,perhaps Wither's most recognizable tune, and proceeded to dig his considerable vocal chops deep into Wither's contemplative lament, Hello, Like Before. This is what everyone came to see, not the tepid nonsense he started out with. Sadly, there was little in the way of a narrative thread throughout to she any light on a performer whose career seemed to ebb before most of today's concert-goers were even born. I would have like to have heard more about Bill Withers and his unlikely rise to fame, and the genesis of his poignant and highly personal songs. Yet, James managed, just for a moment,to make time stand still, casting a hush over the audience, with a watchful Mars, glittering high in the nighttime sky.

The following day's stormy weather did little to dampen audience enthusiasm or the talents of the brilliant performers on multiple stages at the festival on the isle of Fort Adams.

Pat Methany returned to perform the next day on the main Fort Stage in driving rain, yet he delivered an electrifying set that rivaled the hurricane level wind and rain with his intensity.

Vocalist and saxophonist Grace Kelly kept things moving swimmingly (pardon the pun) in the shelter of the Quad stage, paying musical tribute to festival Artistic Director Christian McBride in a stunning display of vocalize and launching into her own uniquely refreshing brand of  jazz fusion which she proclaimed was inspired by a film on female superheroes. Musically, she can claim the same encomium for herself.

Metheny and company perservered on the Fort Stage overlooking a roilling Newport Bay. Just as he had ended his Hall of Fame concert with a pensive evocation on the solo acoustic guitar, the aforementioned custom built 42 -string Pikasso guitar. His free-wheeling, highly imaginative and emotive strumming left no doubt that audience members were in the thrall of a true modern musical master. Those who hung with him through the rain soaked afternoon were richly rewarded for their sufferings. Metheny's composition Bright Size Life was perhaps a harbinger of things to come under the following day's shimmering summer skies.

Artemis, the all-female musical ensemble led by brilliant pianist and composer Renee Rosnes featured Melissa Aldana on Saxophone, Anat Cohen, clarinet and reeds, Noriko Ueda, Bass, Ingrid Jensen, trumpet and Allison Miller on explosive percussion. The icing on this all-female celebratory cake was a vocally superlative Cecile McLorin Salvant, who proved with her artful phrasing and towering jazz vocal improvisations, that the human voice is just as potent a musical instrument as any of those assembled onstage. The group's collective effort on Monk's Brilliant Corners, set the tone for the performance under blazingly beautiful summer skies, with the ambiance of boats in the harbor serving as the backdrop to a delightfully swaying capacity crowd.

Savant, looking slim and lovely in a simple white summer linen dress, laid claim to her own musical legacy, with a tribute to Billie Holiday, singing Fine and Mellow, a simile that can easily be applied to Ms. Salvant.

Artemis similarly gave musical flight with takes on the Beatles (Fool On The Hill) and an appropriately innovative take on Stevie Wonder's If It's Magic, creating a musical alchemy all their own.

Eclectic saxophone and reed legend Charles Lloyd celebrated his 80th birthday in three separate incarnations. In his second outing on the Fort Stage in driving rain, he presented a riveting set highlighting his New Quartet, the ground-breaking pianist and music historian Jason Moran, Bassist Reuben Rogers and drummer Eric Harland. Lloyd, a devout Yoga practitioner, contorted his tall, lean form about the stage as he wove his unique musical tapestry with threads of past icons, Prez, Hawk and Trane, with his own brand of musical mysticism and flights of fancy. Moran was the commander of the ensemble's ship, keeping apace with the quixotic twists and turns of Lloyd's flashes of current genius and fleet ing remembrance. No other saxophonist, save the great John Coltrane himself, were he still in corporeal form, could have given such an all-encompassing and thoroughly enthralling career recital.

Avant-garde vocalize high priestess Lucinda Williams lent her whalloping yelps and free-form scat to add a proper note of unabashed gaiety to Charles Lloyd's 80th Birthday Celebration. It was the equivalent of a New Orleans Second Line, Delta Blues wail, and Primal Scream, all combined with the forces of an intergalactic band playing celestial instruments!

Gregory Porter lent his stentorian baritone to the afternoon, also on the Fort Stage, with some uptempo recreations of his many original hits; Take Me To The Alley, among the most notable.

The Festival ended on a decided note of funk, with the explosive George Clinton and Parliament Funkadelic bringing the entire Fort Stage crowd to their feet for a swinging, Funk and Hip Hop crescendo. Only one sad note marred the afternoon, Clinton's announcement of his retirement from the performance stage in the coming year. Not a very bright prospect for music lovers in the New Year. When Clinton played Chicago's Navy Pier New Year's celebration a few years ago. The night ended with post-performance fireworks. That would have been a fitting sendoff for Clinton and the Funkadelic at this year's Newport, considering his impending retirement and the likely prospect that he will never play the festival again. One could hear the musical celebration clear across the Bay in Newport Harbor, following the Ferry Ride to Bowen's Wharf.  Yeah. There should have been fireworks for this one. George Clinton and the crowd would have loved it.

Posted by Dwight the Connoisseur at 11:44 AM