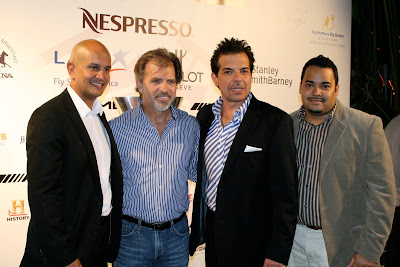 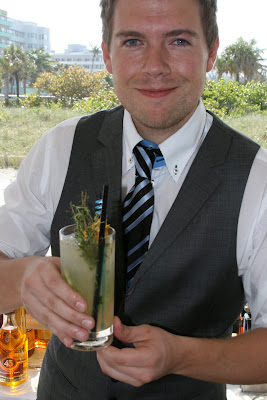 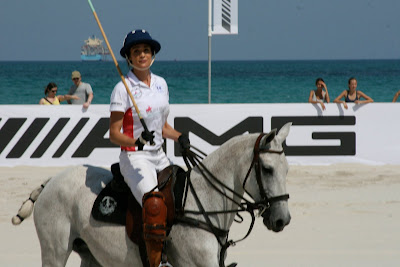 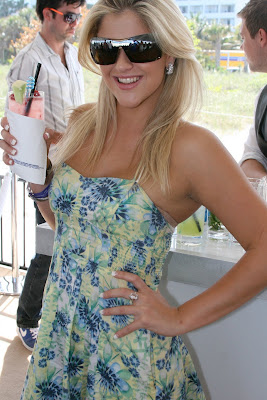 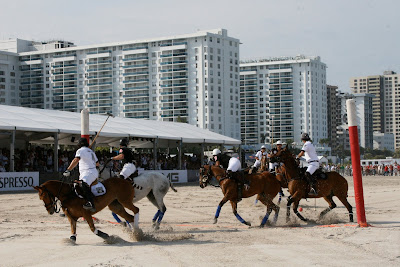 Played on the white sand beach fronting the Atlantic Ocean behind the Setai luxury hotel in South Beach, Miami, Florida, the event was the biggest and best party in town.

“This is truly and event on another stratosphere,” said Bruce Orosz, President of Miami Beach Polo and Founder of the event.

Now in its sixth year, the event is now going global, moving on to Australia and, on September 10-12, to Chicago’s North Avenue Beach for the Chicago Beach Polo 2010 World Cup.

The recession and global banking crisis may have ravaged markets for high-end luxury items, but it was nowhere in evidence at the polo event in South Beach. “We just learned from our sponsors that they’ve sold a record number of products here. Hublot, the luxury jeweler, for example, says their high-end watches, selling for thousands of dollars, have been flying out of their display at their hospitality tent. AMG Mercedes, our title sponsors, sold six of their luxurious, high-performance cars today alone.”

Orosz admits that the gloomy economic picture going into this year’s events left he and his team with doubts as to whether they should go forward. “That’s when AMG signed on as our title sponsor. That put us into a whole other universe. That shot us into the stratosphere!”

The famous AMG logo flew above the VIP Pavilion as the high-performance arm of Mercedes-Benz unveiled the 2011 AMG SLS. The crown jewel of the AMG line, the supercar attracted gawkers and the paparazzi with its iconic gullwing designed doors. “AMG’s association with polo is a natural,” Orosz explained. “In one single afternoon, you can experience one of the world’s most aesthetically beautiful and physically demanding games and test-drive the most exclusive, high-performance car in the world.”

Over in the hospitality tents, VIP guests were able to experience the gourmet coffee line and streamlined coffee preparation systems of Nespresso. The opening of the Nespresso Boutique on Miami’s posh Lincoln Road coincided with the Kick-Off for the Women’s Polo Cup and the national rollout of the concept. The Chicago Nespresso Boutique is located in Bloomingdale’s Home at 600 N. Wabash.

The size of the crowd in the VIP gallery, complete with luxury designed hospitality suites and lounges orchestrated by club designer Laura Weinstein attested to the success of the event.

Play continued with the AMG Miami Beach Polo World Cup and Argentine polo player Nacho Figueras, perhaps the most recognized face in the game because of his role as Ralph Lauren model. He scored 7 of his team’s 10 goals to lead the AMG team into a 10-9 win over Morgan Stanley. The Hublot team won the coveted Miami Beach Polo World Cup title. For more information, visit www.miamipolo.com. A new thunder rolls the sands of Lake Michigan, September 10-12 with Chicago Beach Polo 2010 World Cup. Visit www.chicagobeachpolo.com for more information.

Posted by Dwight the Connoisseur at 11:55 PM