Roam around Rome: vacations made to measure 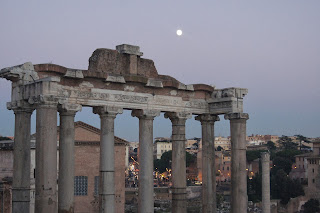 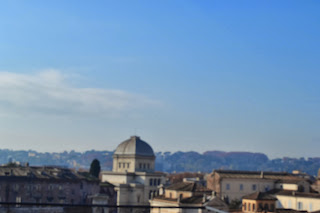 The view from Caffarelli Terrace

Below: lunch at the Terrazza Caffrelli 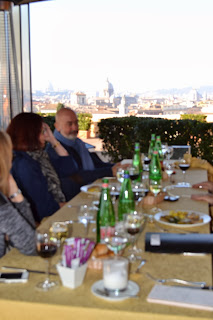 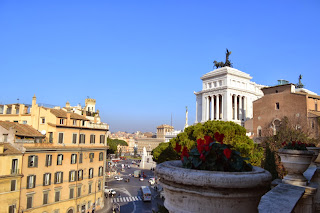 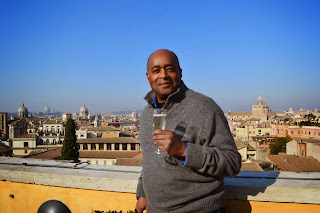 Enjoying a glass of Prosecco on the Terrazza 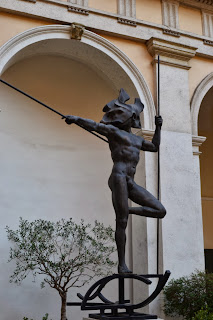 Below: Scenes of Ancient Rome 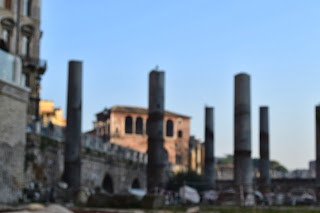 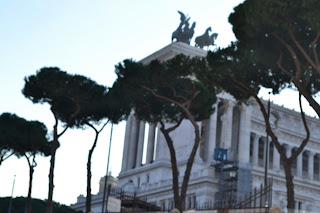 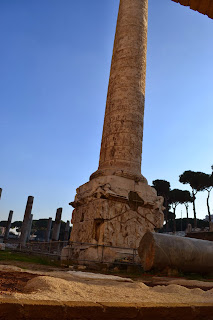 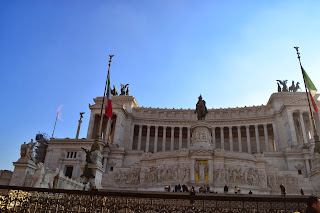 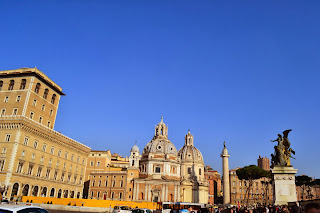 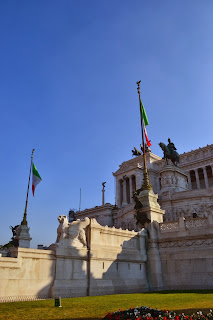 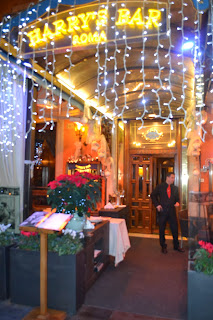 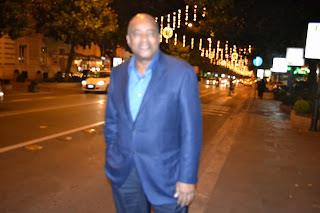 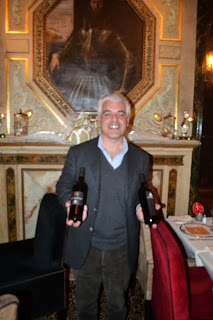 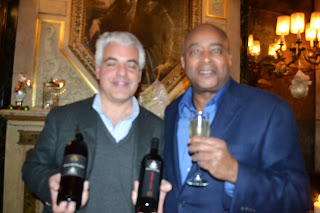 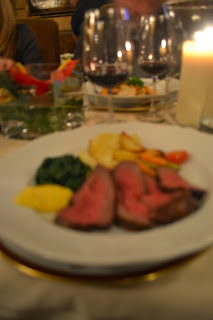 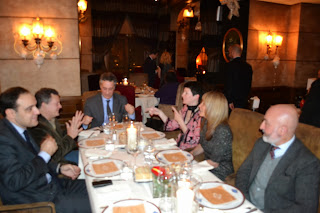 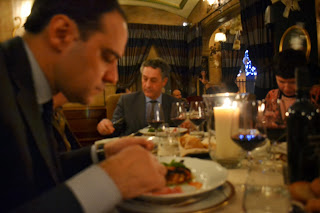 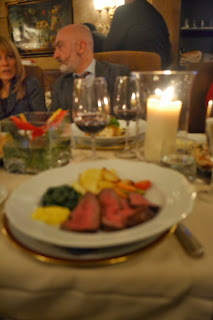 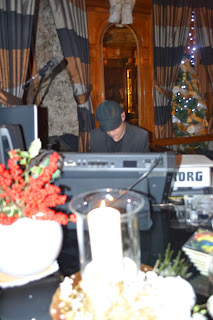 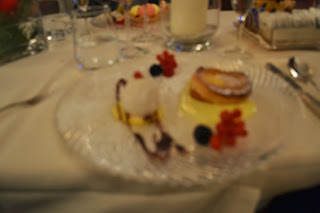 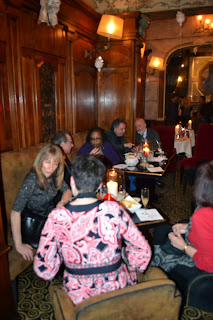 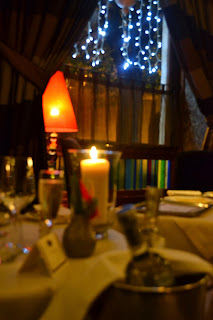 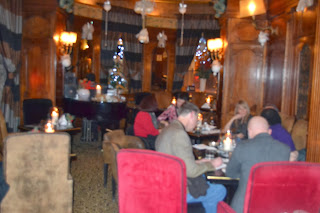 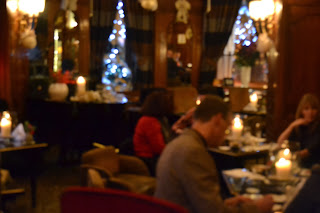 Rome, Italy--There are rare occasions  when a single event can change the course of your life, or at least your perception of it. Such was the case in a recent Rome Educational Tour sponsored by Promoroma, the special agency of the Chamber of Commerce of Rome, conducted by their consultants, the Roam around Rome tour agency and its affable and accommodating  guides Pier Paolo Meschini and Antonio Rinaldini. Their sensitive portrayal of the history and culture of Rome through the lens of their personal perspective and life-long experience made this a travel experience that transcended the mere physicality of the ancient ruins and monuments, giving them breath,  life and vitality.
Our tour allowed us to experience Rome from the very heights of its grandest vistas to the depths of ancient civilizations buried in hidden labyrinths beneath some of the city's most established treasures. It is these secret chambers and the barely discernible meanings behind the inscriptions etched in stone on their crumbling walls, that the particular insights of our tour guides became most evident.  Their words brought illumination to darkened passageways and faded markings. Personal anecdotes about the ancient families and their fabled past brought the gleaming images of marble statues and fountains into even sharper relief against the azure brilliance of the Roman sky. This was Rome as never seen before, more beautiful, picturesque and storied than any documentary or dramatic film.
A short van ride from the quaint and beautifully appointed Hotel degli Aranci in the "Embassy Row" and orange tree-lined streets of the tony residential neighborhood not far from the Villa Borghese, and our party arrived for an intimate introductory luncheon on the outdoor terrace at the Terrazza Caffarelli high above the steps of the Capitol and atop the beautiful building that hosts the Capitoline Museums in Piazzale Caffarelli. This rare venue, with stunning views of the Capitol and sweeping panoramas of Rome proper, with Vatican City in the distance, offers a unique location for exclusive luncheons, dinners and private receptions as well as meetings and conventions. The management, coordinated by Relais le Jardin, creates events that match the extraordinary surroundings.
The Capitoline Museums can be traced back to 1471, when Pope Sixtus IV donated the first group of bronze statues of great symbolic value to the People of Rome. This modest, but significant contribution served as the nucleus to a growing collection closely inked to the city of Rome, its history, culture and its people. Breathing the crisp early winter air and taking in the sun-drenched vistas and the delightfully rich local cuisine prepared by the Relaid le Jardin catering staff made this a truly unique experience that will be long remembered.
Following the fabulous lunch consisting of such local delicacies as Aranchini, Prosciutto, stuffed zuccini flowers and delicate pasta infused with fresh, local truffles, sprinkled with Pecorino Romano cheese and  roasted guinea hen with chestnuts and rapini, we then visited the nearby Domus Romane of Palazzo Velentini.
The Palazzo Valentini, seat of the Province of Rome since 1873, was commissioned by Cardinal Michele Bonelli, a nephew of Pope Pius V, in 1585. When it underwent renovation in the seventeenth century, the archeological remains of  ancient Roman houses were discovered underneath. A team of art historians, archeologists and architects researched the remains and, through the Provincial Administration, restored the ruins and put the excavations on public display. The result of their work revealed a series of luxurious steam rooms, bathing areas and entertainment centers, punctuated by lavish gardens and gathering, lounging and gaming areas that rival the spas and country clubs of today. This was a significant revelation of the glorious lifestlye experienced by the wealthy elite of ancient Roman society and a glimpse into a highly advanced and sophisticated society that provides the historic underpinnings for the topography and culture of modern day Rome.
A leisurely late afternoon rest and it was time to freshen up and head for dinner in the nearby central area for dinner at Harry's Bar, made famous by the writings of Ernest Hemingway and the creation of the famous  Champagne and white peach nectar drink, the Bellini and Harry's  legendary continental cuisine which has lined the stomachs of celebrities from the literary, political, artistic and film world for decades. Many of the pictures of Harry's most prominent customers through the ages, shaking the hand of its founder Harry Cipriani and the current owner and manager of the Rome location, adorn the walls in its elegant, wood-paneled dining rooms and sumptuous and cozy bar, for which it is world-famous. This was a memorable evening of great cuisine and brilliant company in an historic surrounding that oozed charm. This is the Rome that inspired artists and poets and  La Dolce Vita and I was happy to be a part of it, if only for one evening!
Posted by Dwight the Connoisseur at 11:51 AM