Roam around Rome-Part III; "Hidden Rome;" inside the Jewish Ghetto and Trastevere


ROME, Italy--The Coliseum, the Pantheon, the Spanish Steps and the Plaza Navona are all at the top of the list of tourist attractions for anyone visiting "the Eternal City." Beneath their magnificent facades lie centuries of history and hidden treasures, some visible to the naked eye, others only revealed by exploring deep beneath the surface of Rome's cobbled streets.

Such was the experience of an Educational Tour 2013 organized and sponsored by Promoroma, the special Agency of the Chamber of Commere of Rome, and conducted by their consultants, Roam around Rome, vacations made to measure.  Long walks through Rome's labyrinth of streets and alleyways revealed its rich tapestry of history and culture. Tour guides Pier Paolo Meschini and Antonio Rinaldini expertly peeled away layers of history to expose the truth behind legends and the facts behind many widely accepted truths.


The Spanish Steps (Scalinata della Trinita dei Monti), the widest staircase in all of Europe. was actually built with French money. The diplomat Etienne Gueffier bequethed funds in 1723-1725 to build the steps on the slope between the Spanish Embassy and the Trinita dei Monti church, which was under the patronage of the Bourbon kings of France and the Holy See in the Palazzo Monaldeschi below. If you look carefully at the scultural details, you'll see the well-known Fleur-de-Lys, symbol of the French Bourbon court.

Cameras and photography were not allowed at our next stop, but it best illustrated the fact of an historic facade concealing a vital part of Roman history, which was only revealed upon excavation beneath superficial ground.

After the Palazzo Valentini was commissioned to be built in 1585 by then Cardinal Michele Bonelli, a nephew of Pope Pius V, the building was later partially demolished and rebuilt. During the course of all of these restructurings, a treasure was discovered; the archeological remains of adjoining ancient Roman houses.  A team of historians, archaeologists and architects, all working for the Roman Provincial Administration researched and then restored the excavations, which are now on public display. Walking through the darkened passageways and peering through the glass floor of the "Domus Romane," one can see the grandeur of Roman life in the remains of the home's subterranean chambers.  The house was divided between the main living area, the gardens and the servants quarters. Underground passageways led to the famed "roman baths" which were a lbyrinth of steam rooms, fueled by underground geysers and streams, large bathing areas with cabanas and lounges, game rooms, replete with the remnants of ancient game pieces and gaming boards and private chambers where whispered plots and assignations took place. The darkened spaces all came vividly to life through the stories narrated by the guides. Elaborate inlaid tile floors and wall carvings gave a clear indication of the grandious surroundings that once gleamed brightly so many thousands of years ago. Roman life was luxurious and sophisticated.  Every member of the Roman elite lived like Donald Trump!  The nobility of the time enjoyed pleasures, not unlike those taken for granted today; hot and cold running water, indoor "plumbing, sumptuous baths rivaling anything made by Kohler, walls lined with beautiful artwork, kitchens that turned out lavish gourmet meals and myriad entertainments provided by their slaves. Colorful drawings and friezes along the walls revealed a continuous story line that was viewed at leisure by frequenters of the baths. They could be looked upon as the first "movies."

The Trastevere, in the heart of the city, is the home of poets and artisans. It now is the epicenter of the city's nightlife,with restaurants, cafes and quirky boutiques. The area has a dcidedly Bohemian air, not unlike New York's Greenwich Village. A favored destination for night-lifers because of its bars and clubs, it is also the locale for many important monuments from the past, including the Monte dei Cocci, an articial mound dating back to the ancient Romans, who used to dump their broken pieces of pottery onto a gathering pile of earthenware that now looks like a hill.

Dominating the main square in the Trastevere is the ornate church, the Basilica of Our Lady, Santa Maria. The inscription on the episcopal throne states that it is the first church dedicated to Mary, the mother of Jesus. That fact remains in dispute, but what is indisputable is that it is the oldest Christian church in the city,

The Tiber River is the main watercourse of the city of Rome, and its demarcation line. Numerous famous bridges traverse its rushing waters and divide the city into its many historic districts. Among the most fabled is the Jewish Ghetto. Established first by Pope Paul IV between 1555 and 1559, it cramped several thousand people behind its walls, contributing to the oppression of the Jews during the Italian Renaissance. Later, in 1492, it became a refuge for Jews who emmigrated by the thousands to escape torture and execution during the reigh of Queen Isabella and King Ferdinand of Spain. It was Pope Alexander VI (1492-1503) who enlarged the ghetto and defined its current boundary along the banks of the Tiber River.

A grim reminder of the Holocaust is embodied in a plaque on the doorway of an apartment building at the mouth of the ghetto, which marks the capture and subsequent liquidation of scores of children who were wrested from the ghetto and hauled away to the concentration camps.

Today, the Jewish Ghetto is a lively place, filled with street vendors, sidewalk musicians, vibrant cafes and restaurants renowned for their fusion of Italian and Jewish cuisine. The sights, sounds and smells of the Jewish Ghetto tantalize and delight, inviting endless exploration and degustation. An afternoon lunch that lasted for nearly three hours, caused our group to miss out on visiting a whole list of  historic sites on our itinerary. Nontheless, the lunch, with its fusion of Jewish and home-style Italian specialties, was one of the most memorable in recent memory. The gustatory rewards made up for the lapse in scheduling. What better way to experience the history and culture of a place than by imbibing its wine and cuisine! 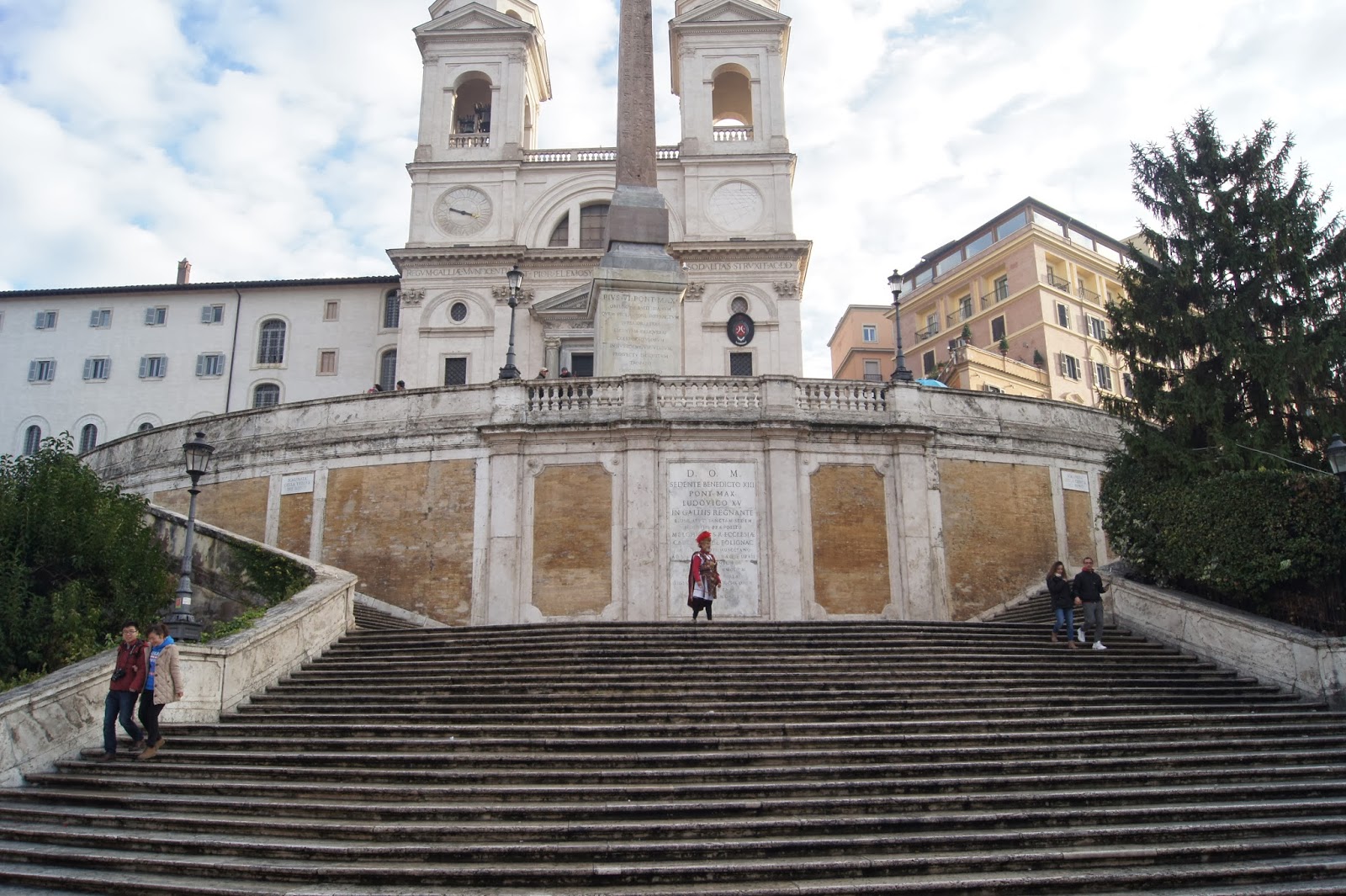 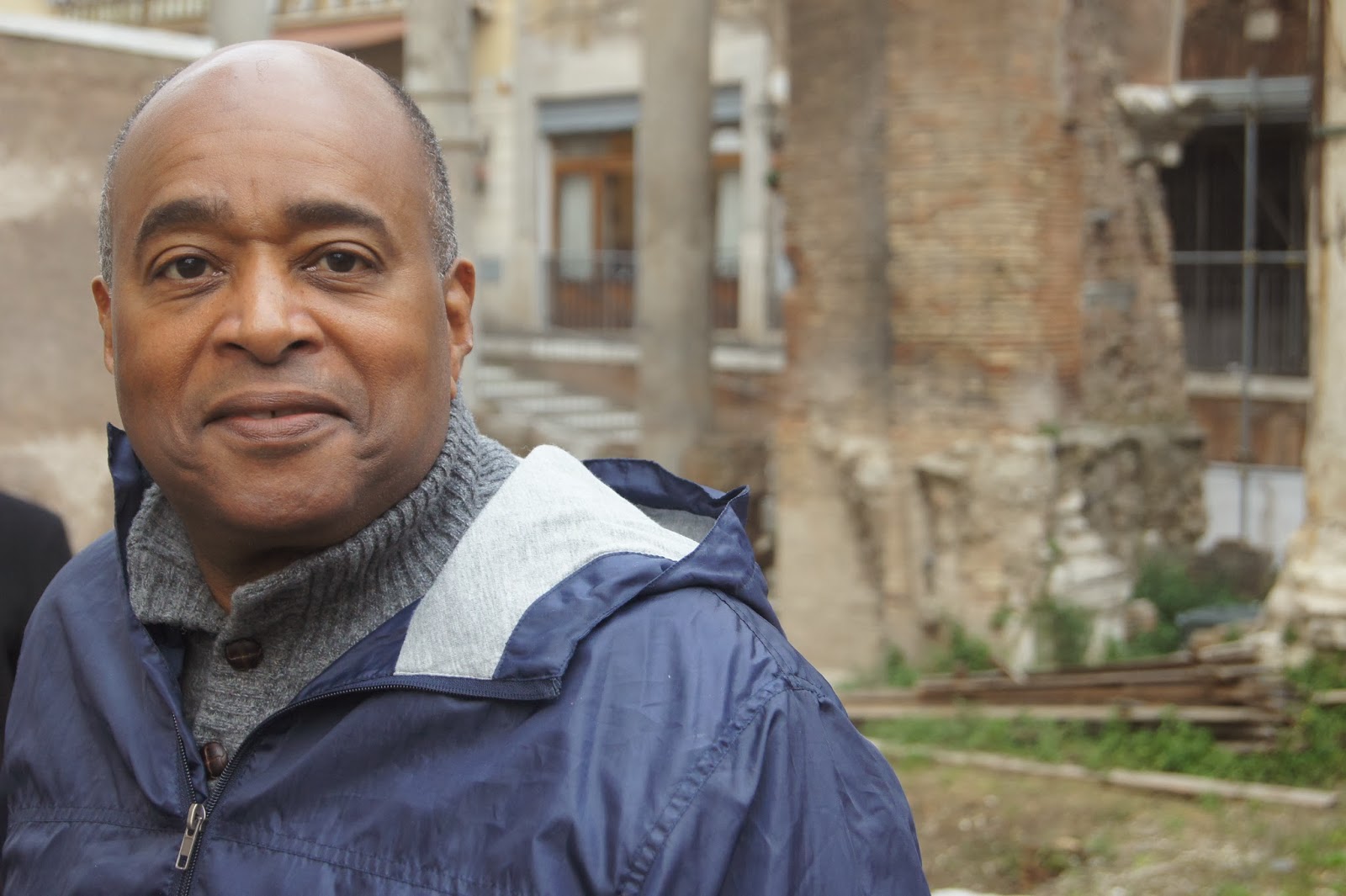 At the ruins of Ancient Rome 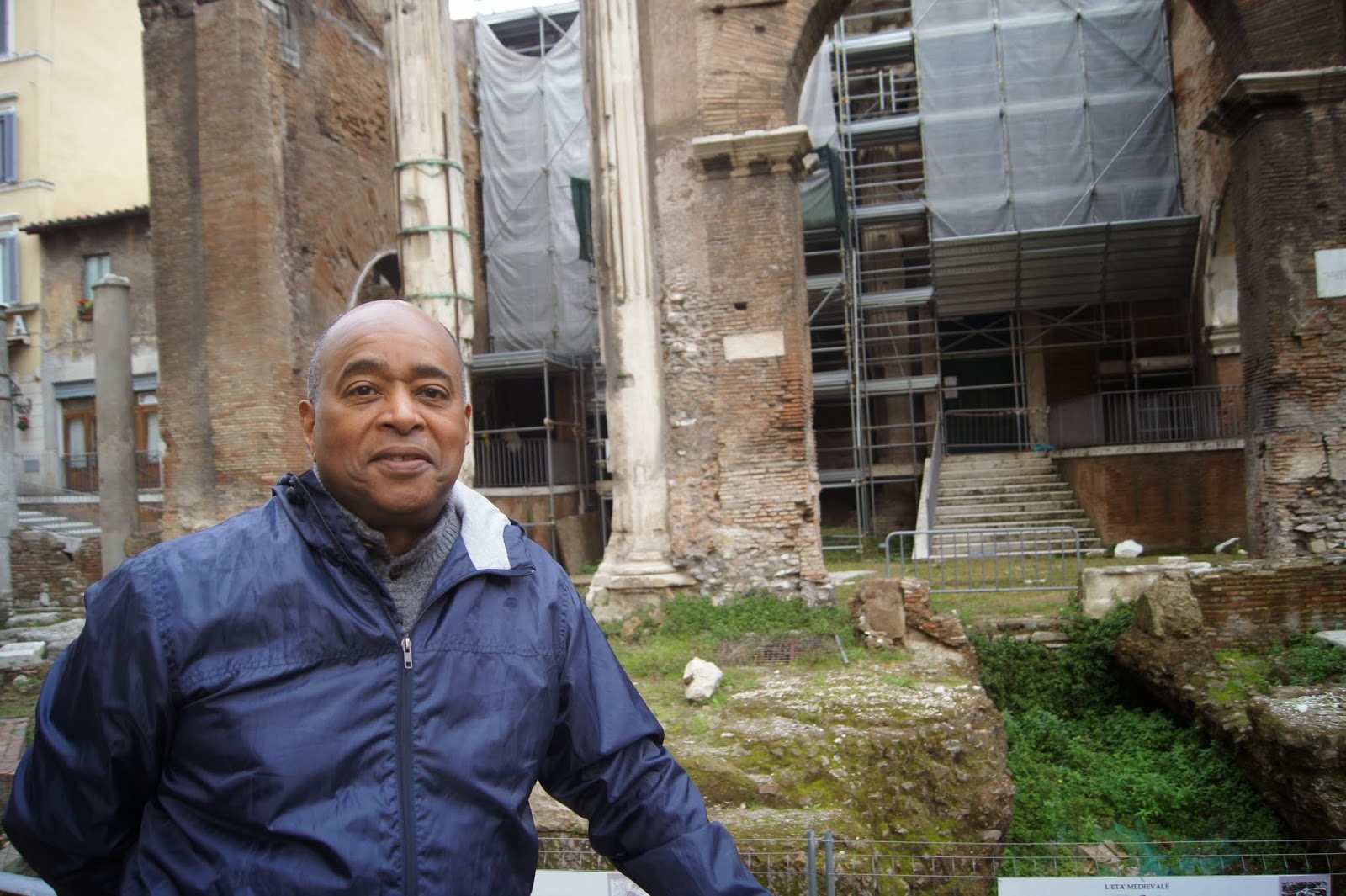 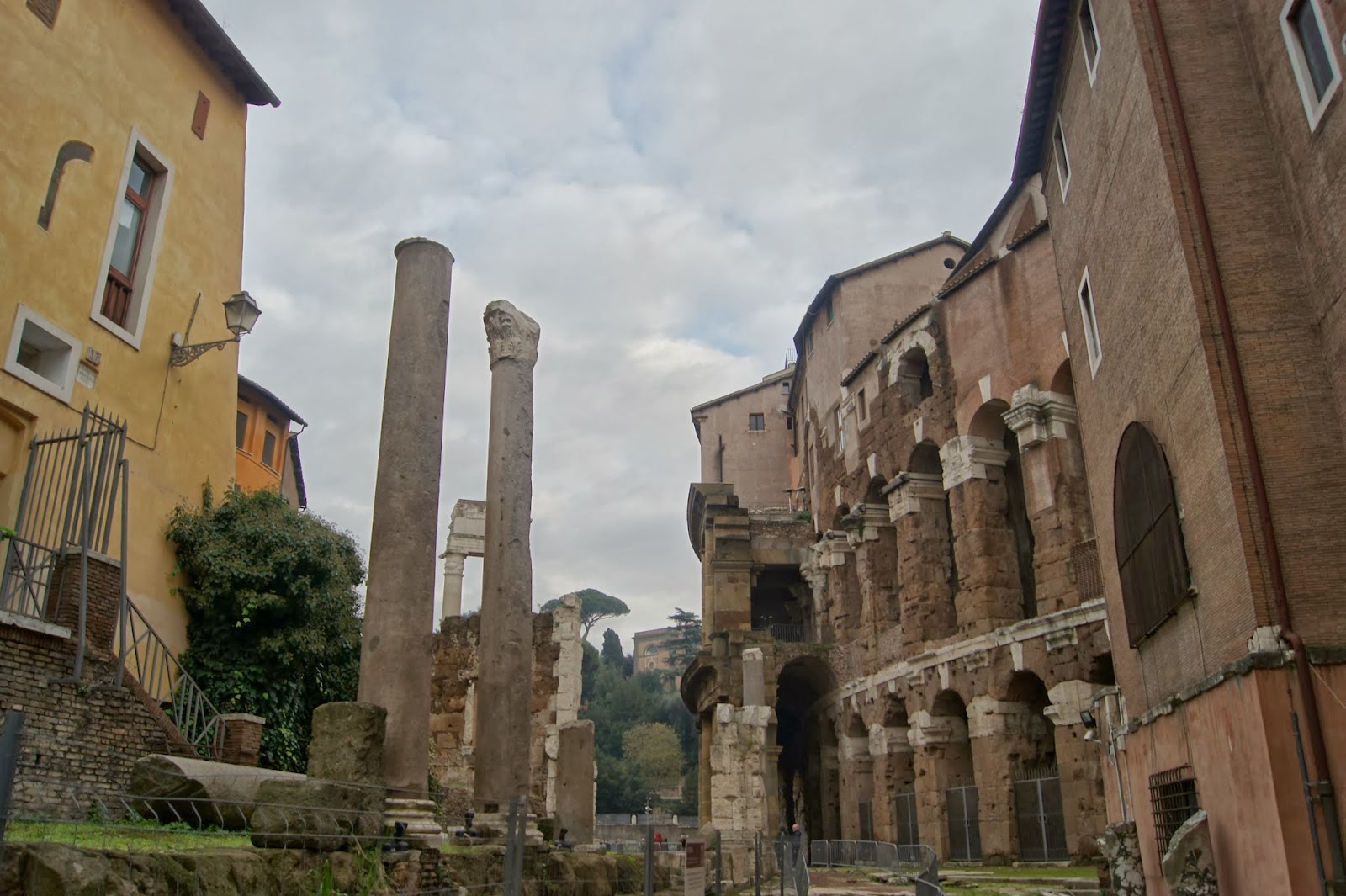 A denizen of the bridge at the Tiber River 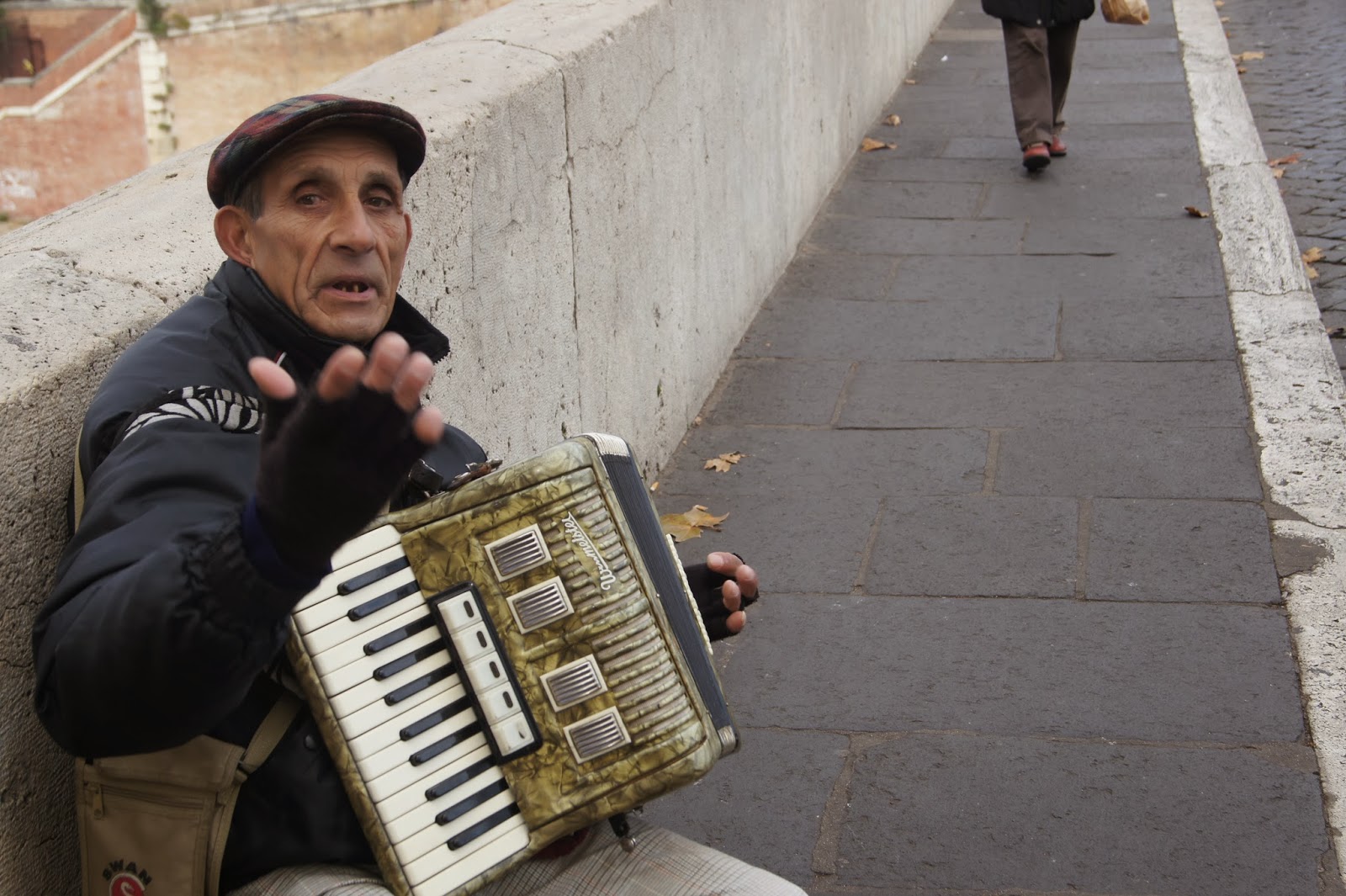 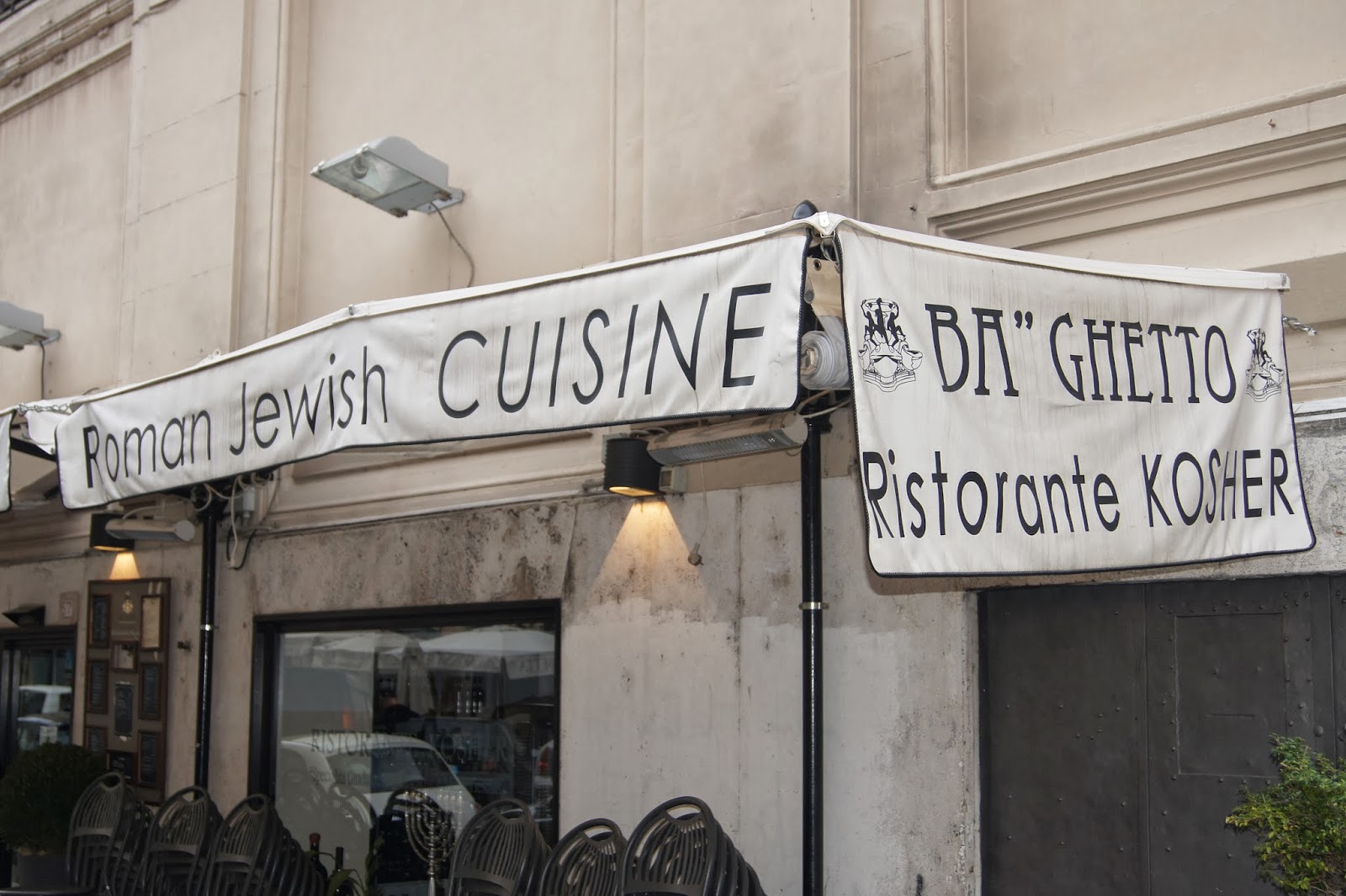 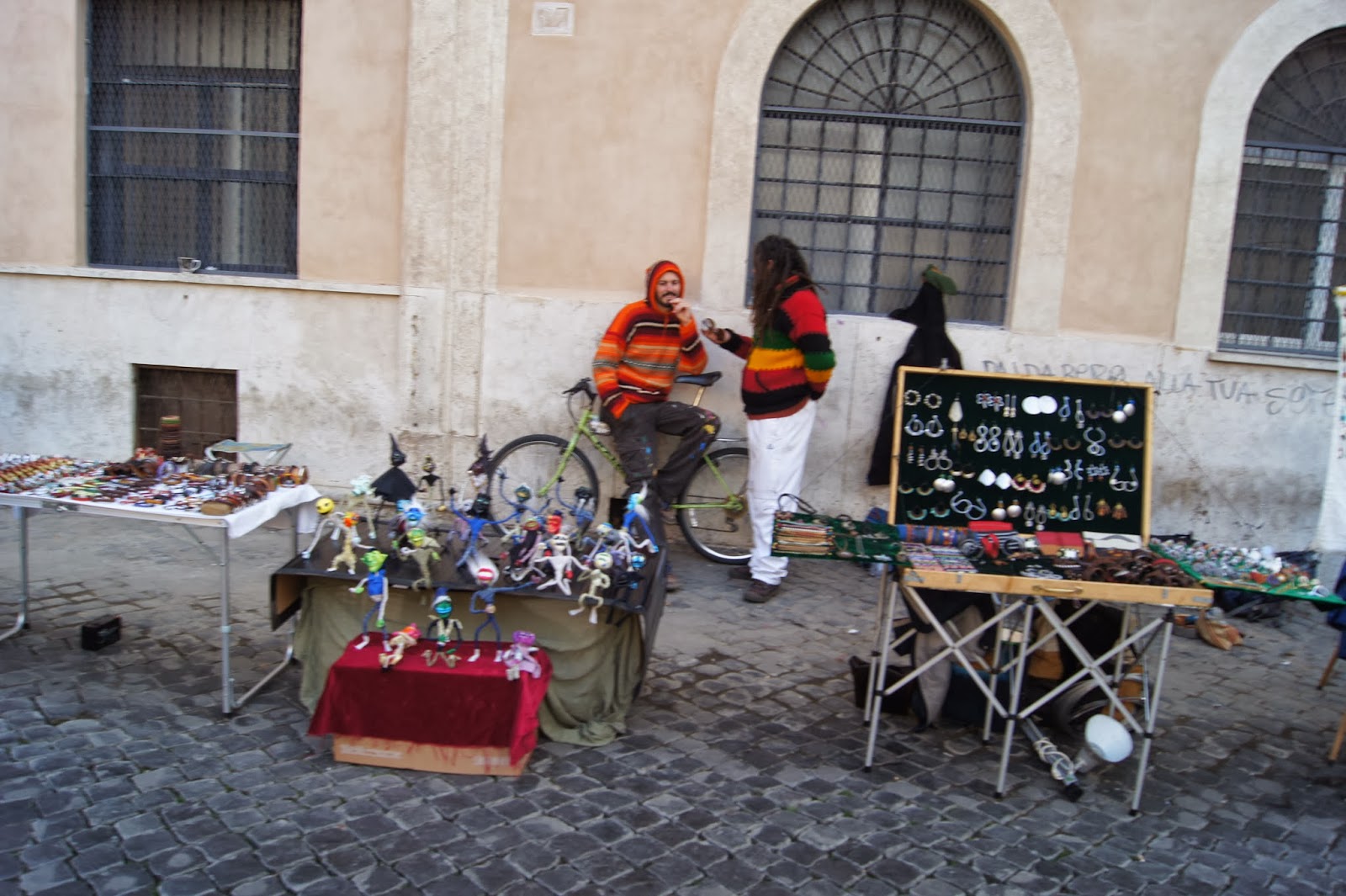 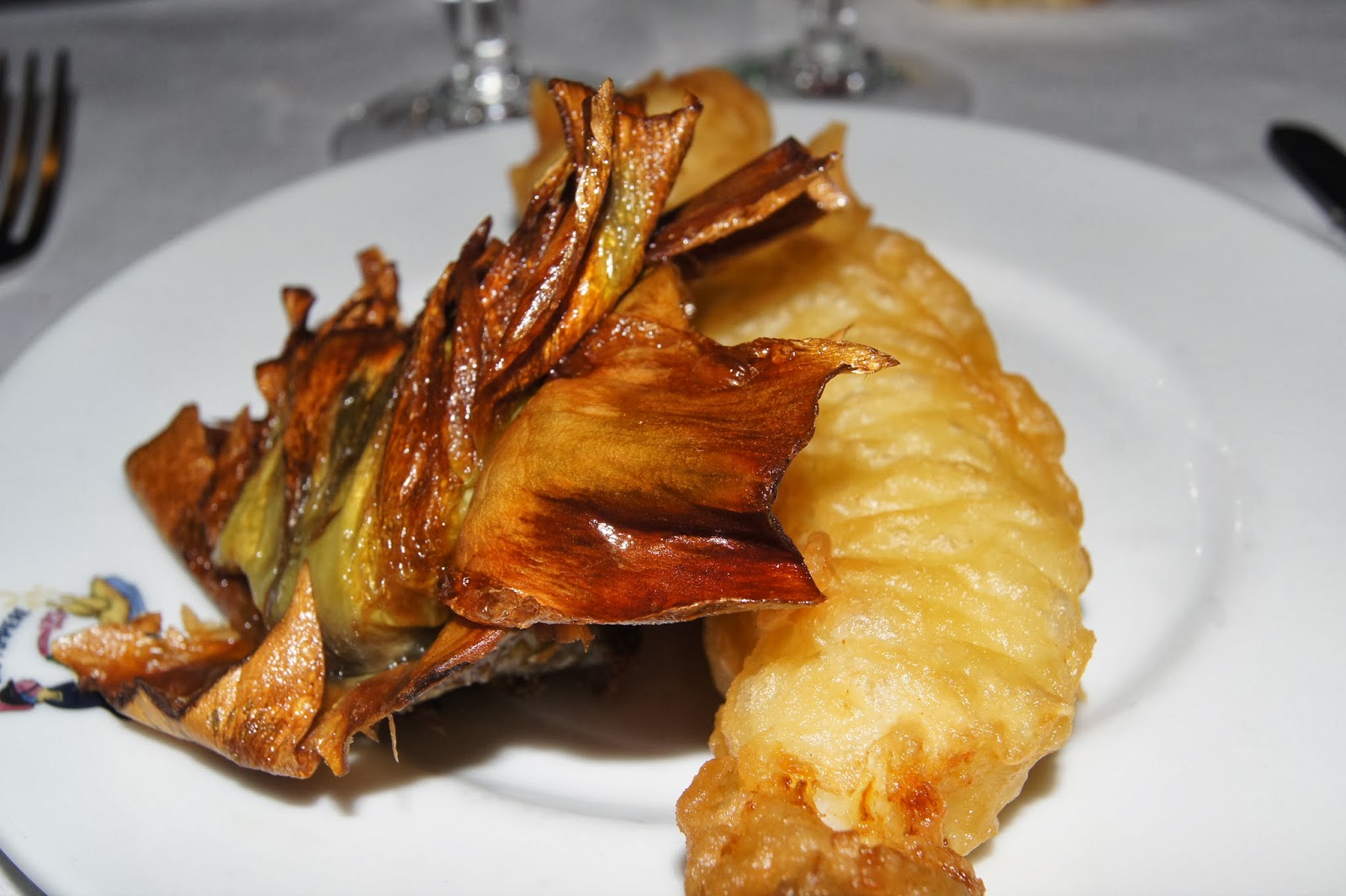 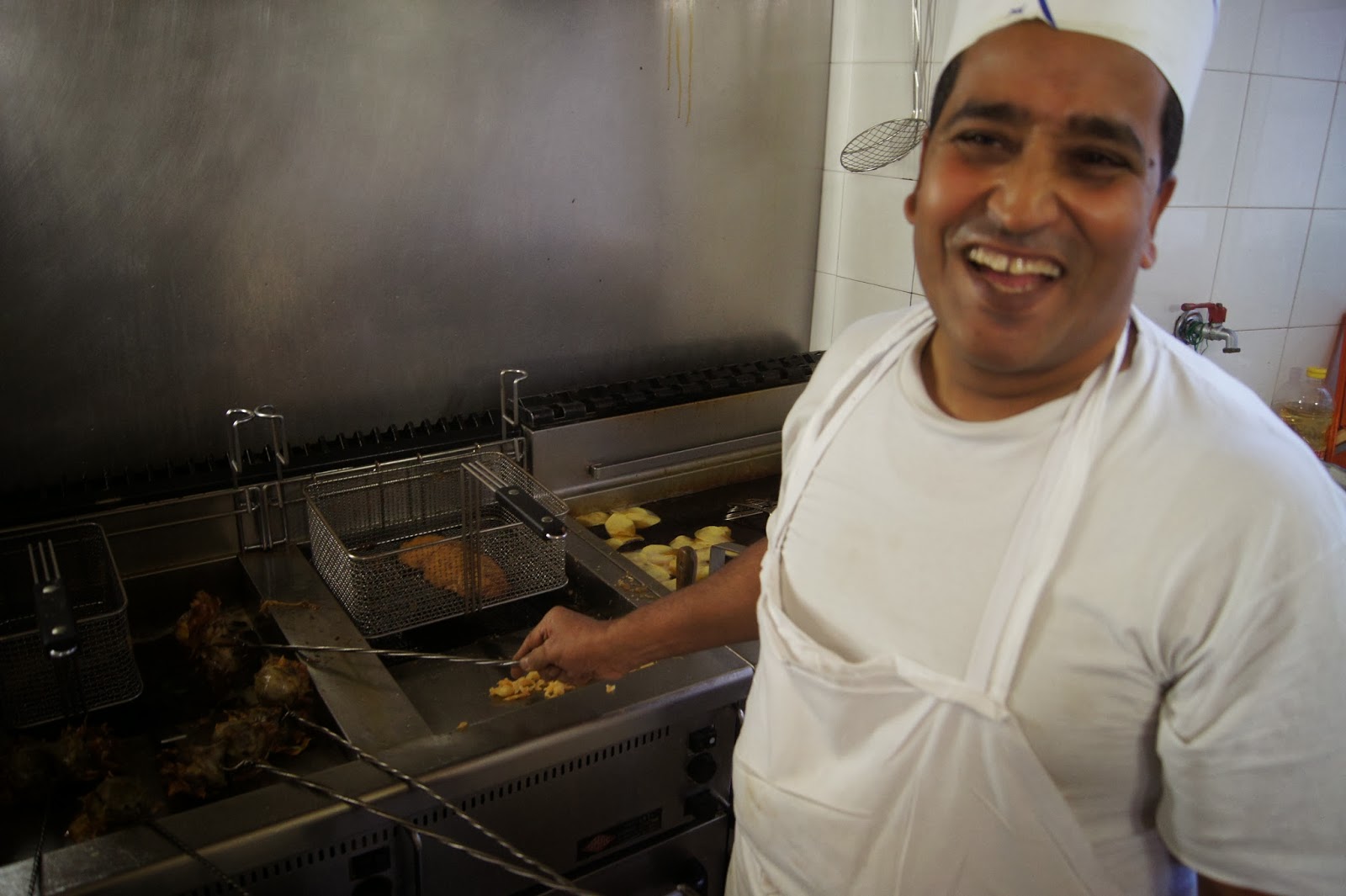 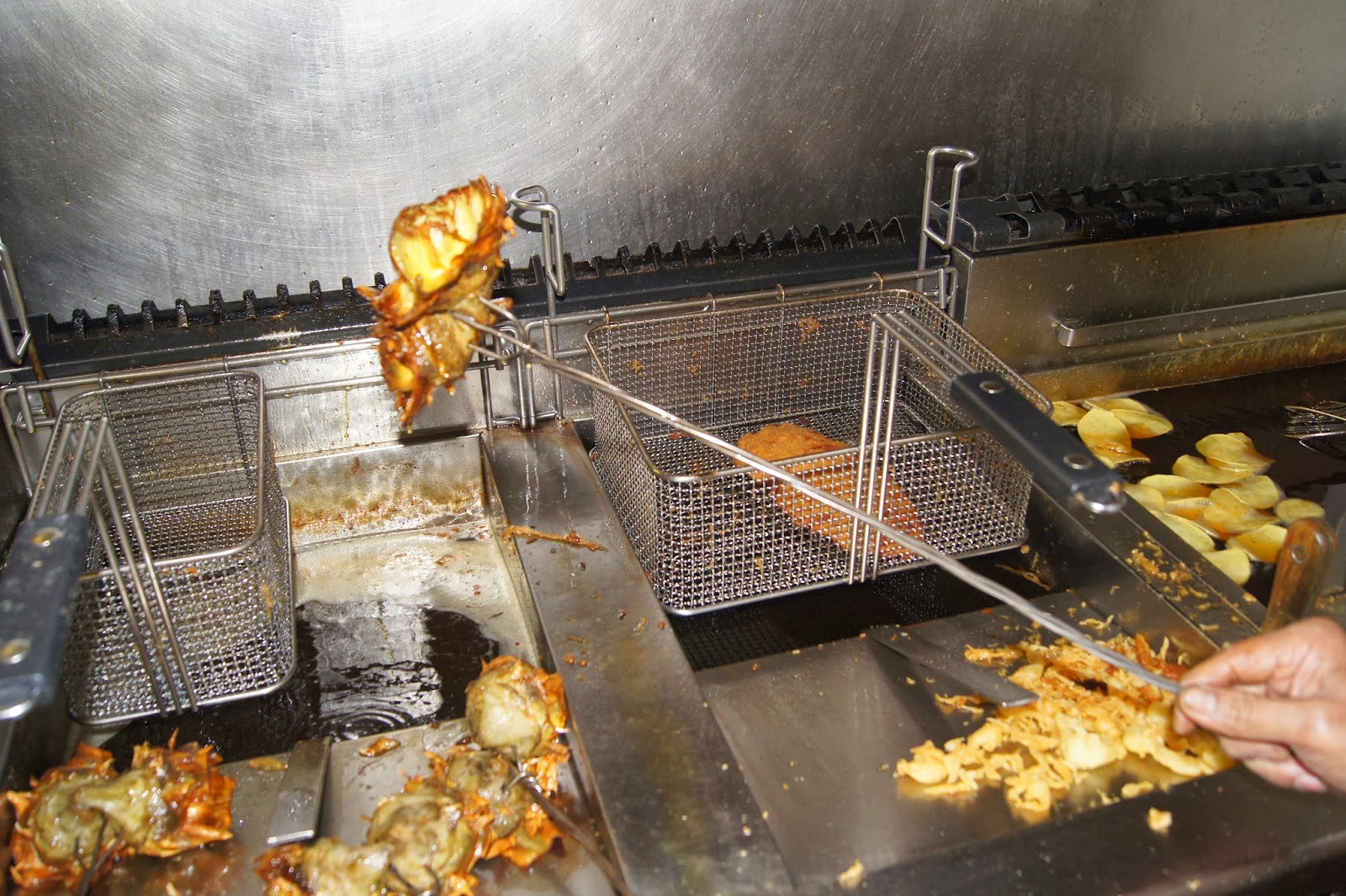 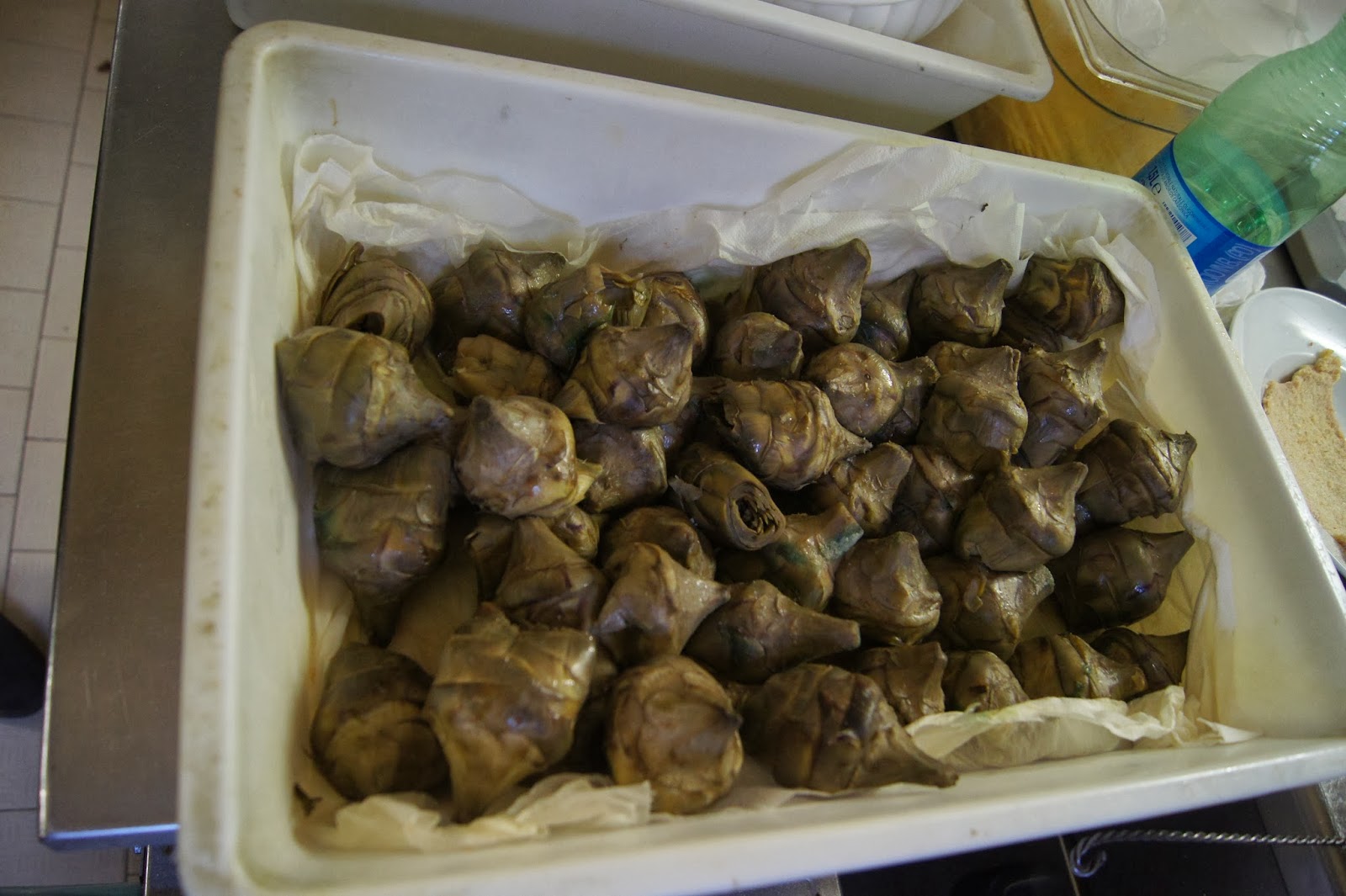 The Tiber River and one of its many bridges 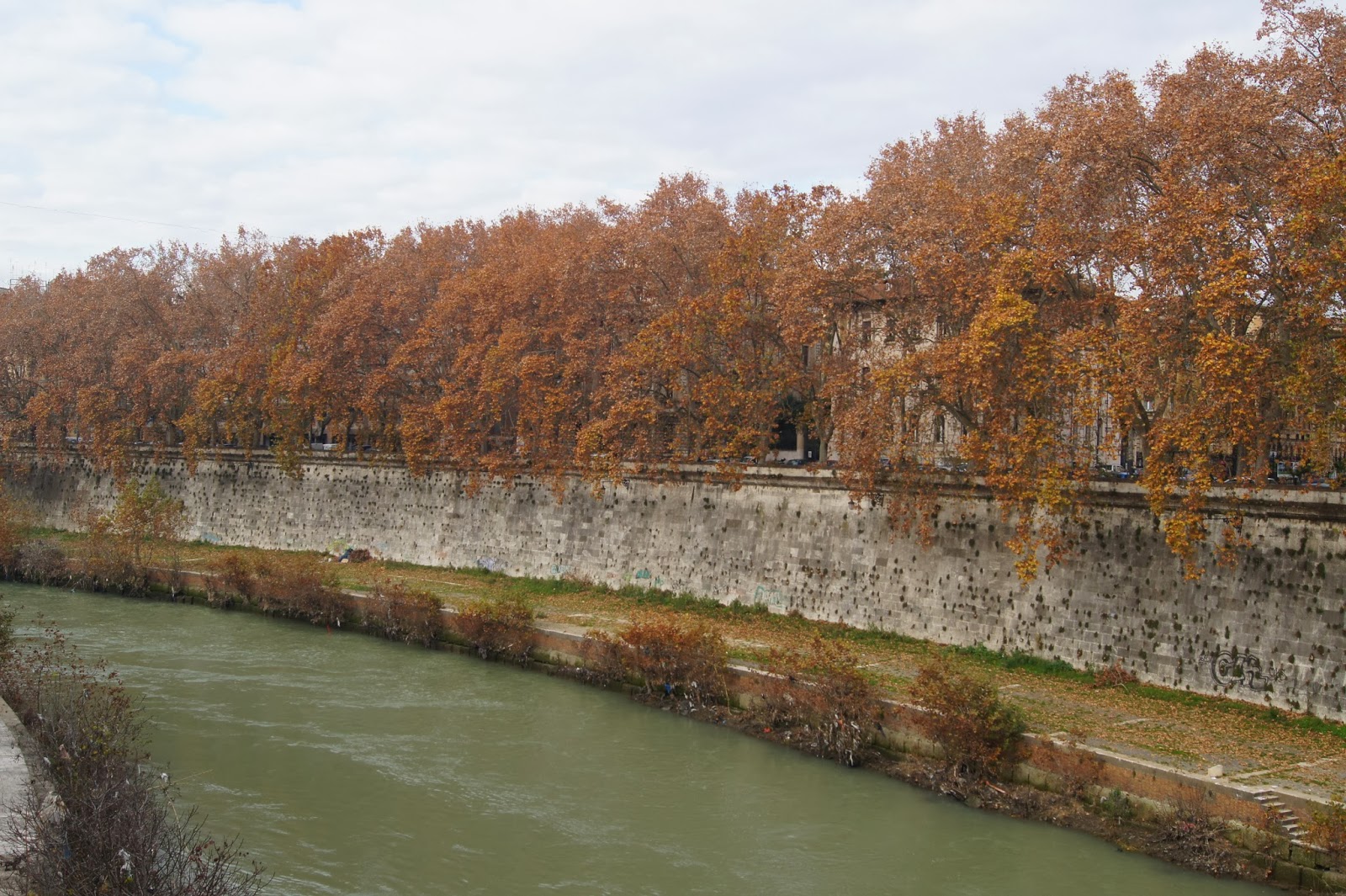 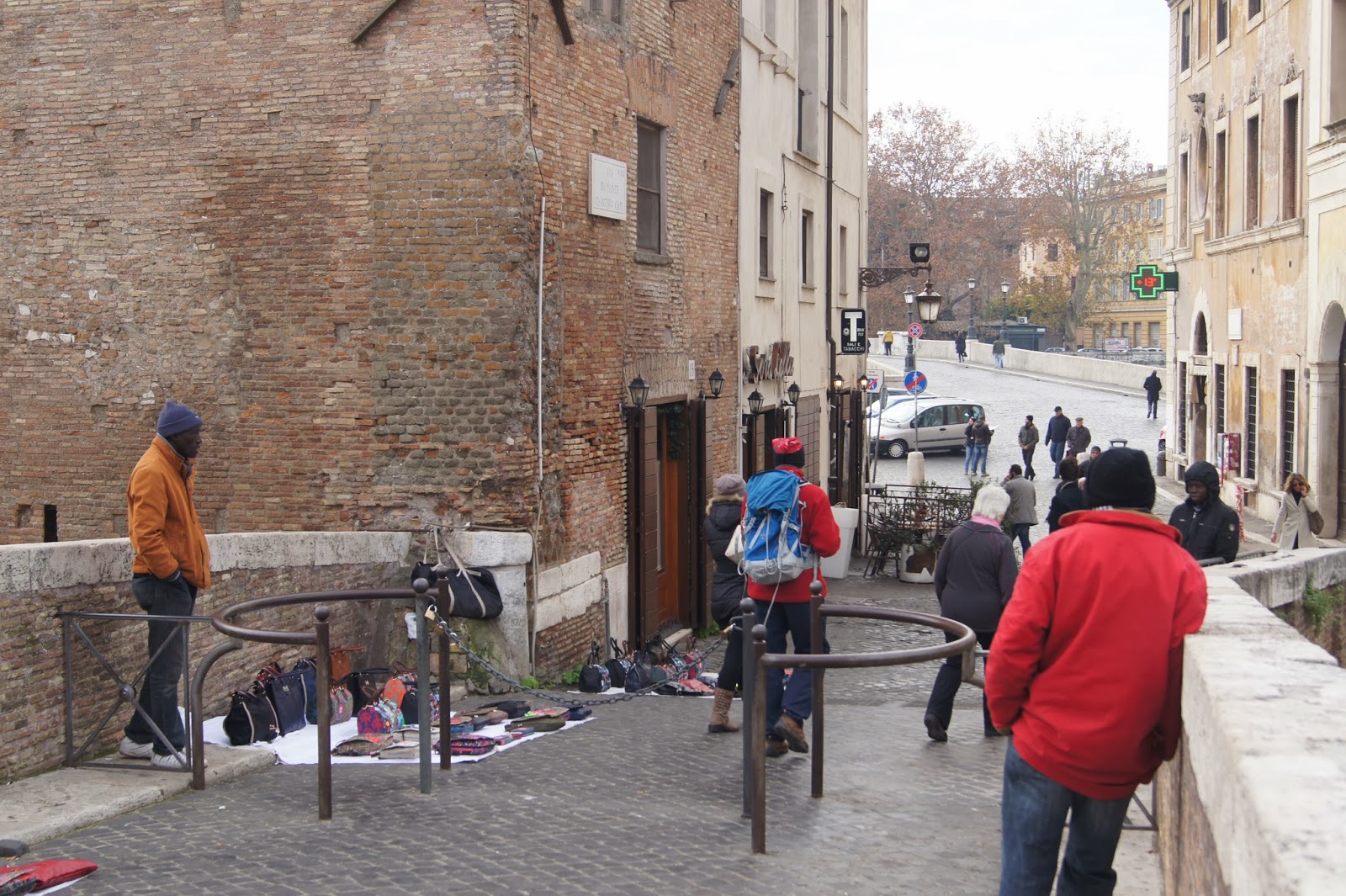 African street merchants at the gateway to the Jewish Ghetto 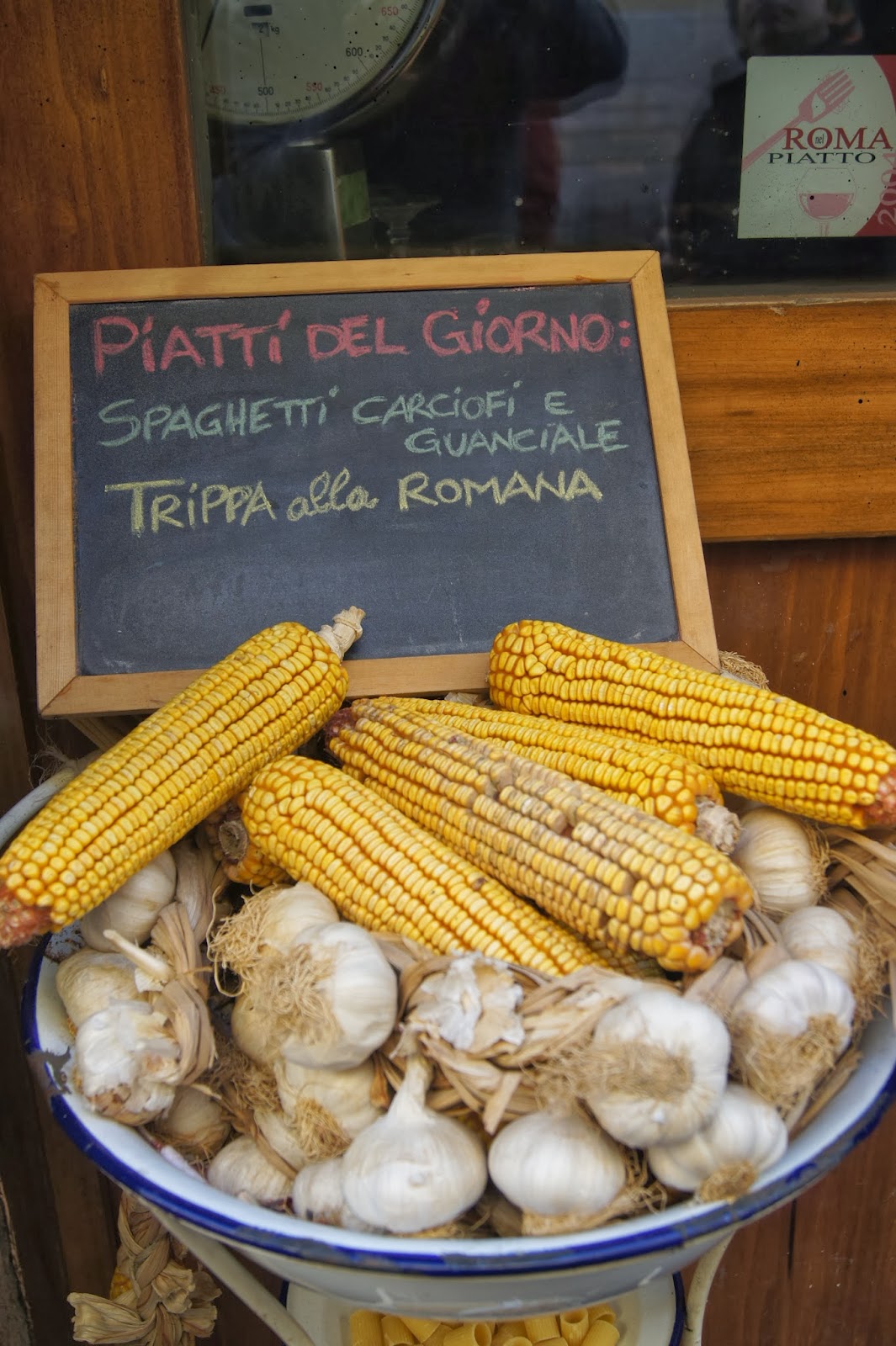 The faces of the Trastevere 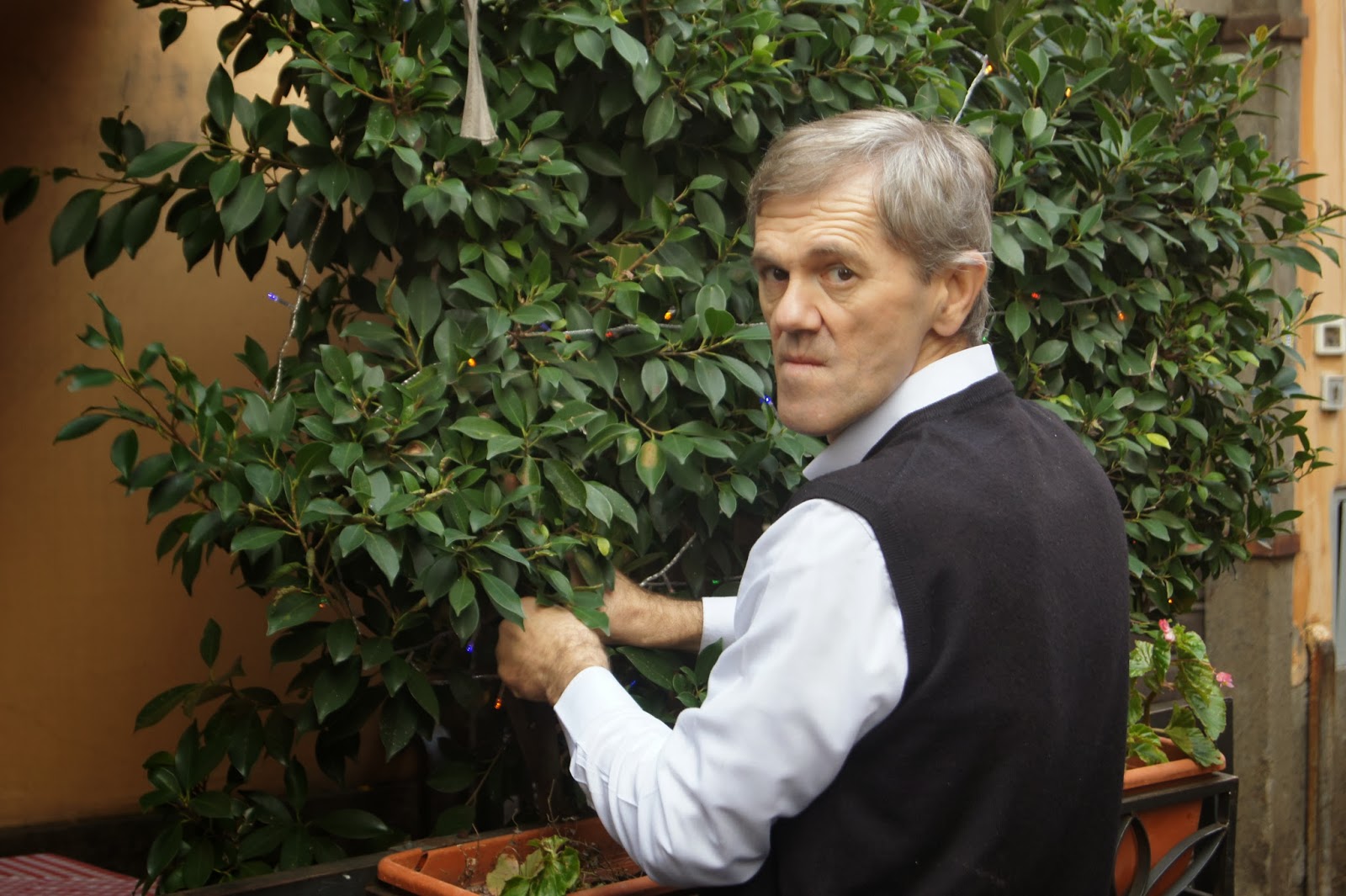 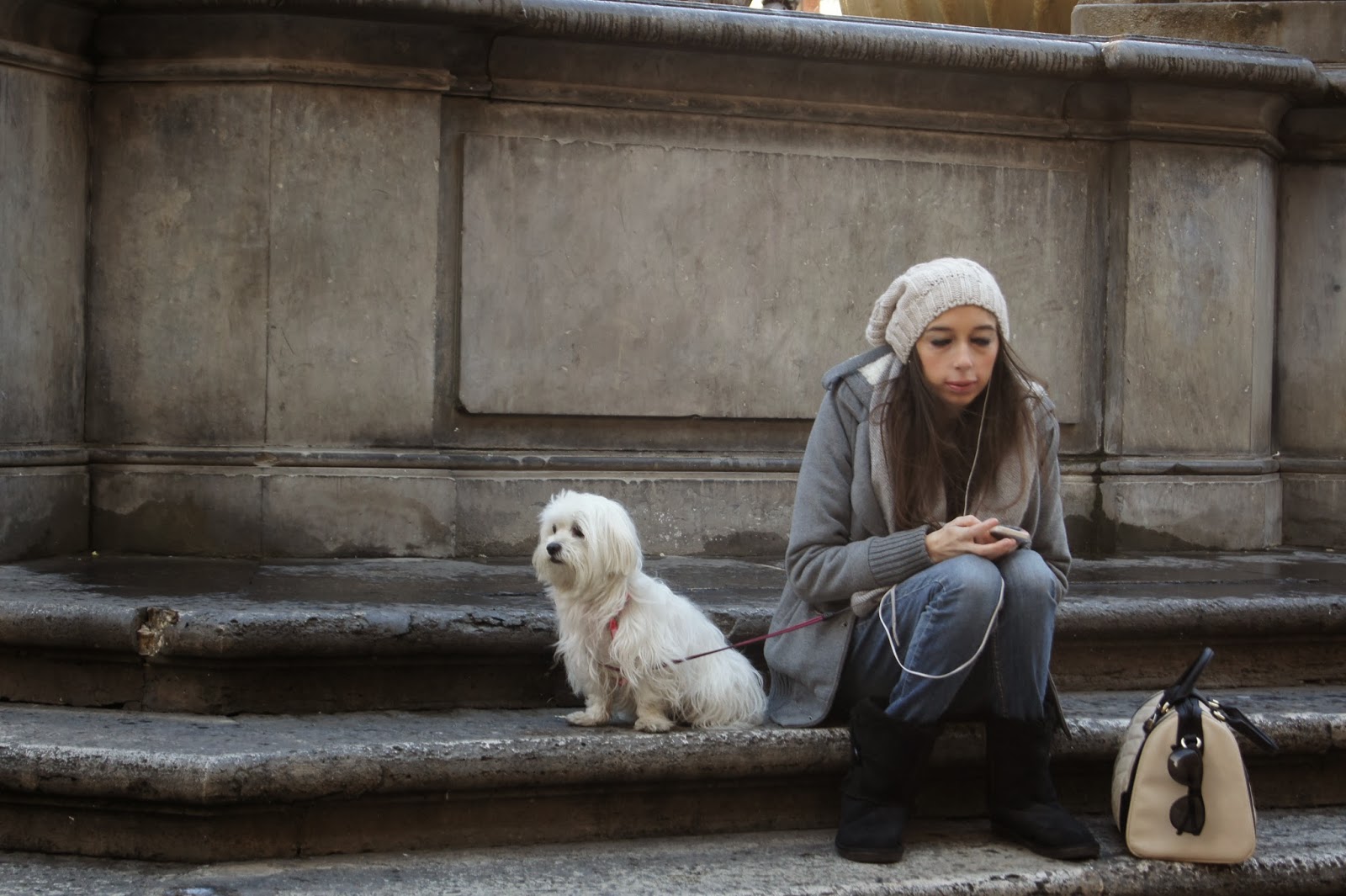 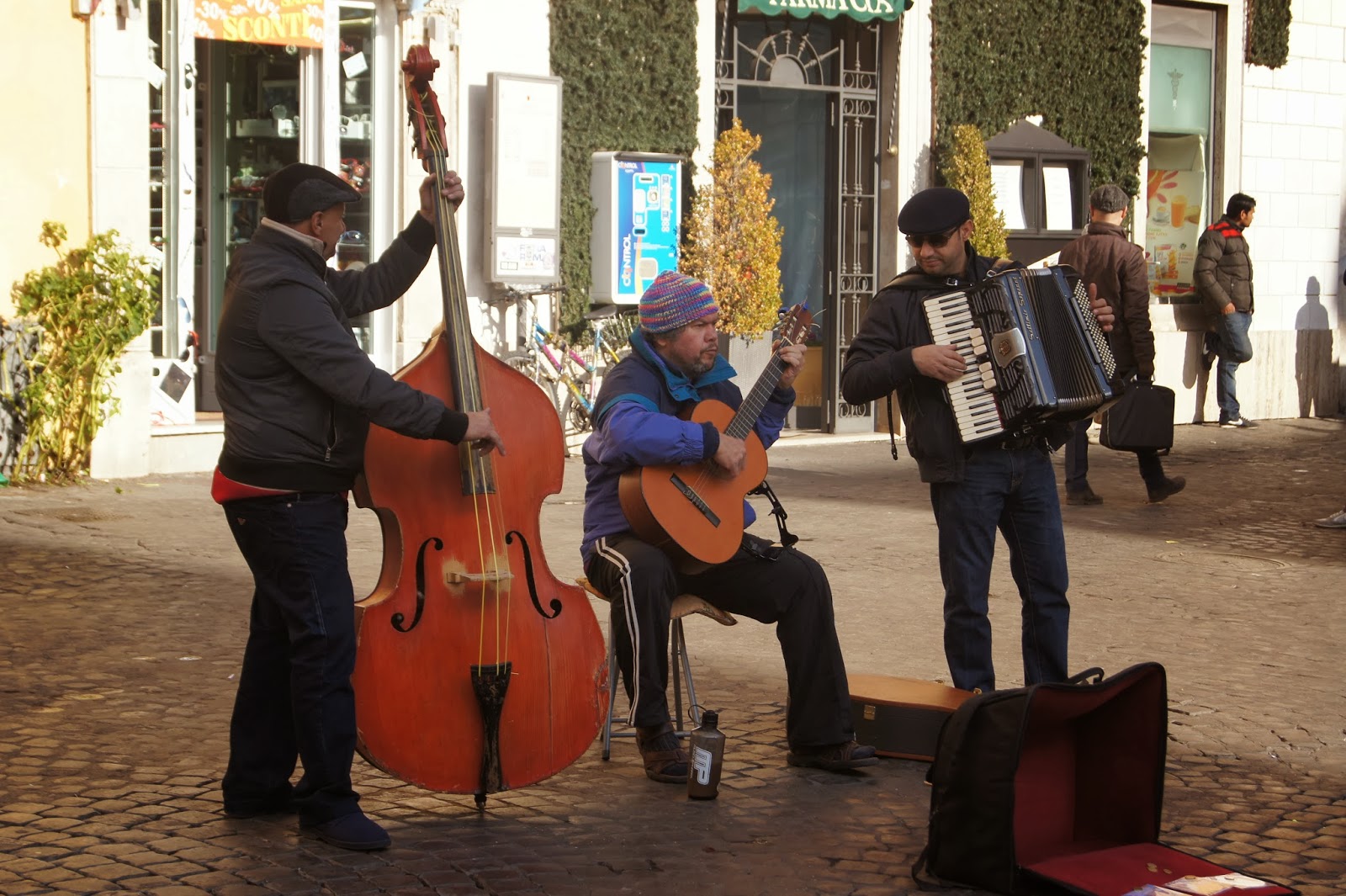 A wedding at the Basilica di Santa Maria in Trastevere 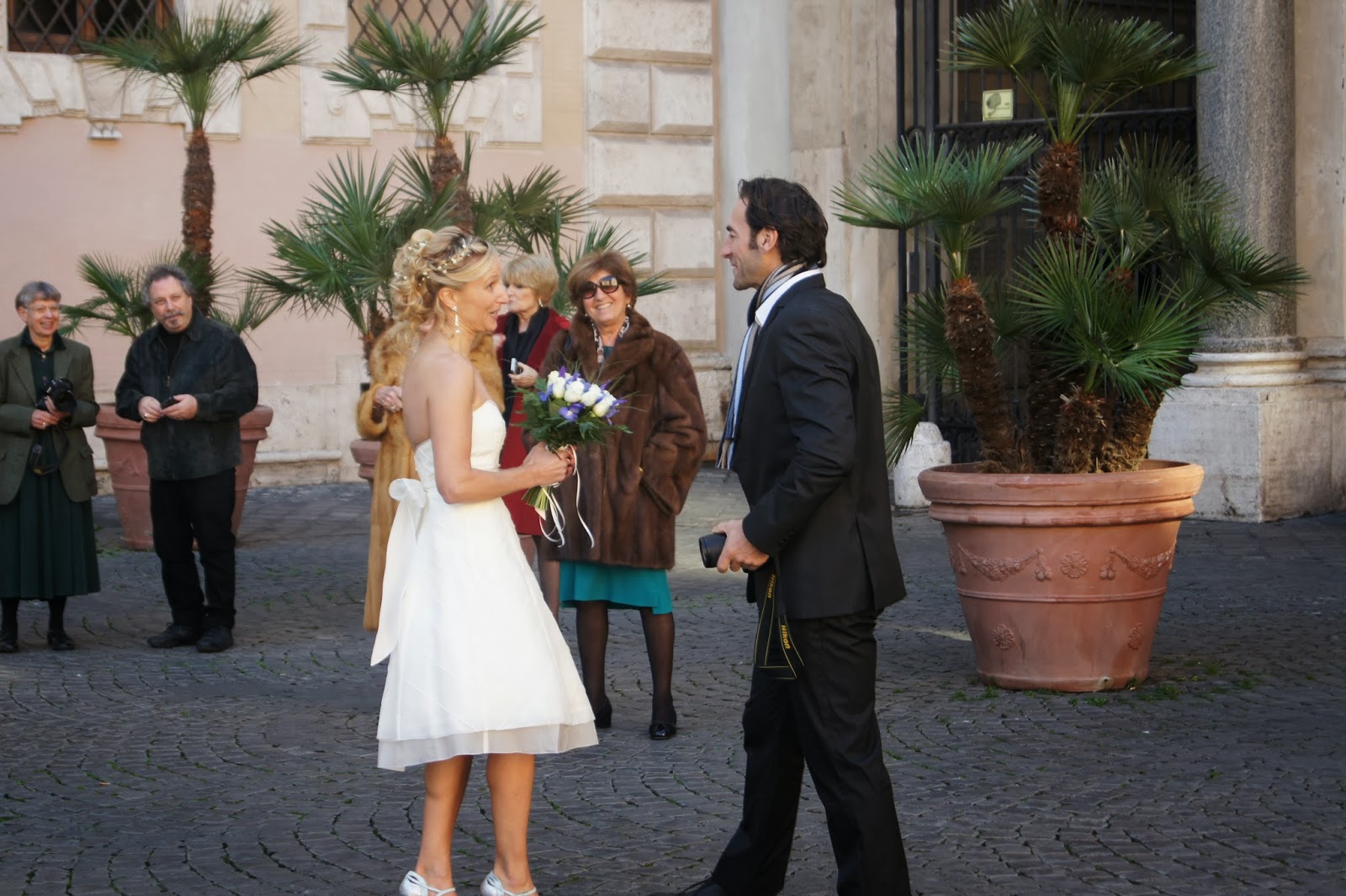 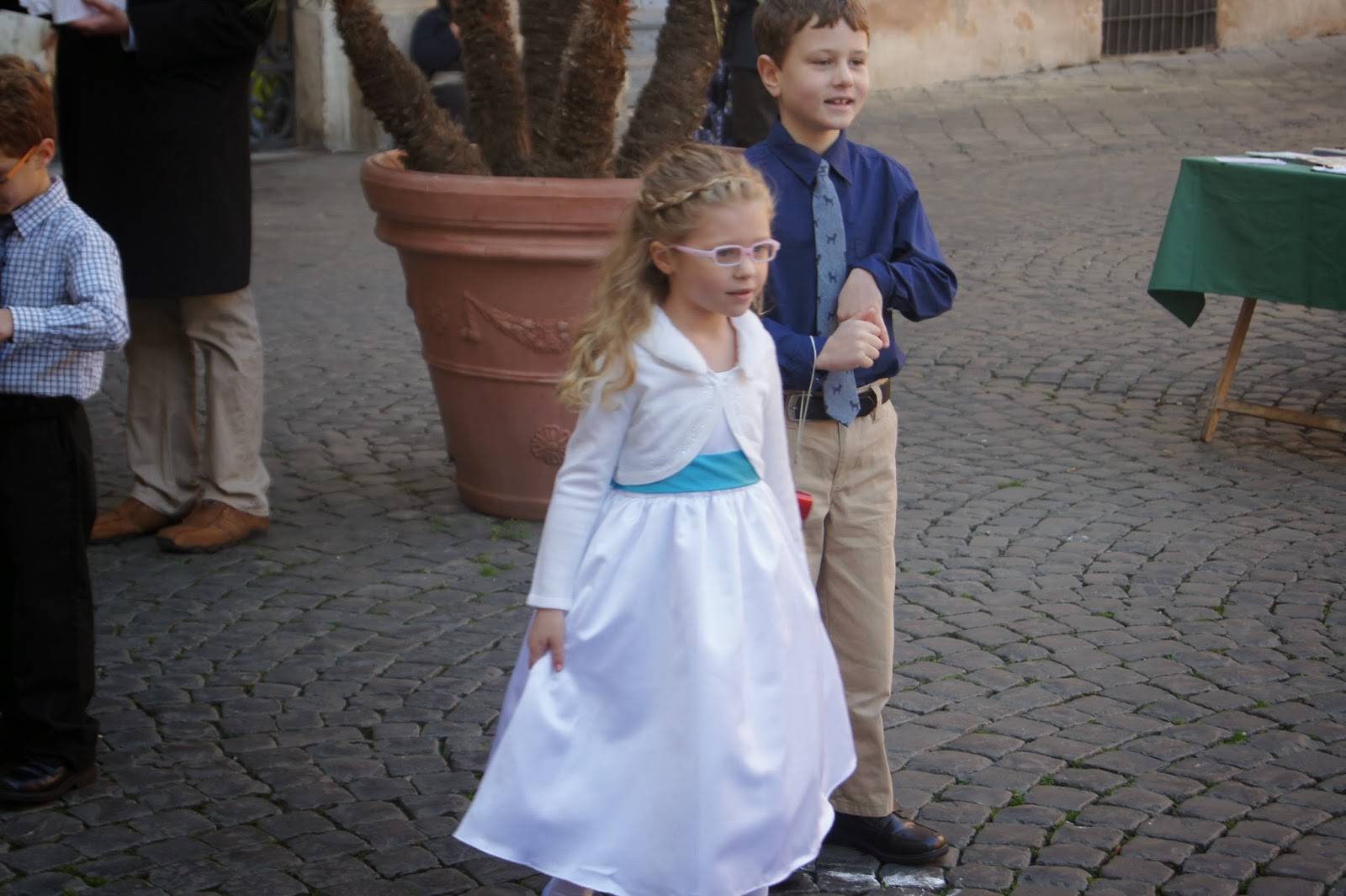 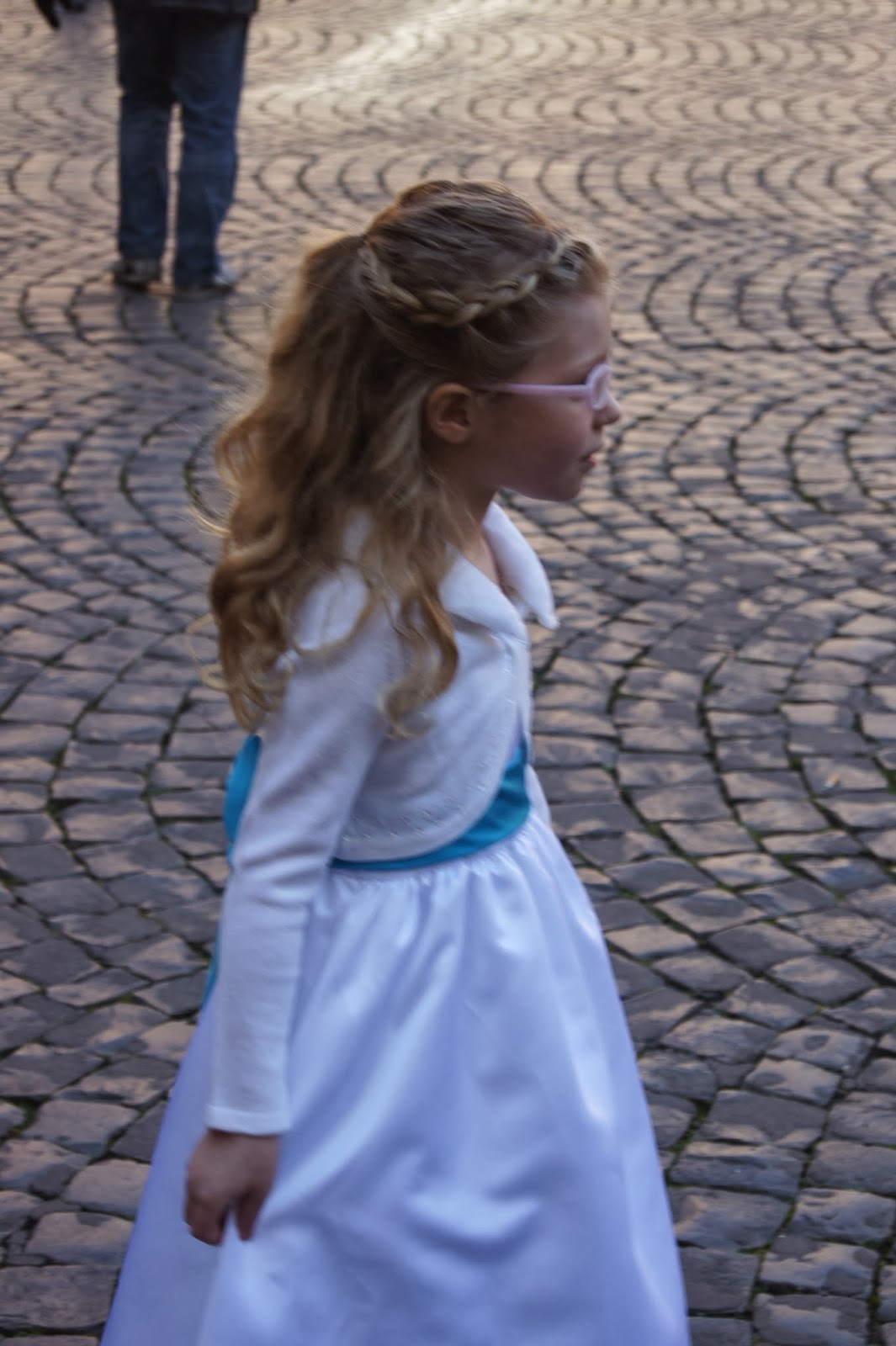 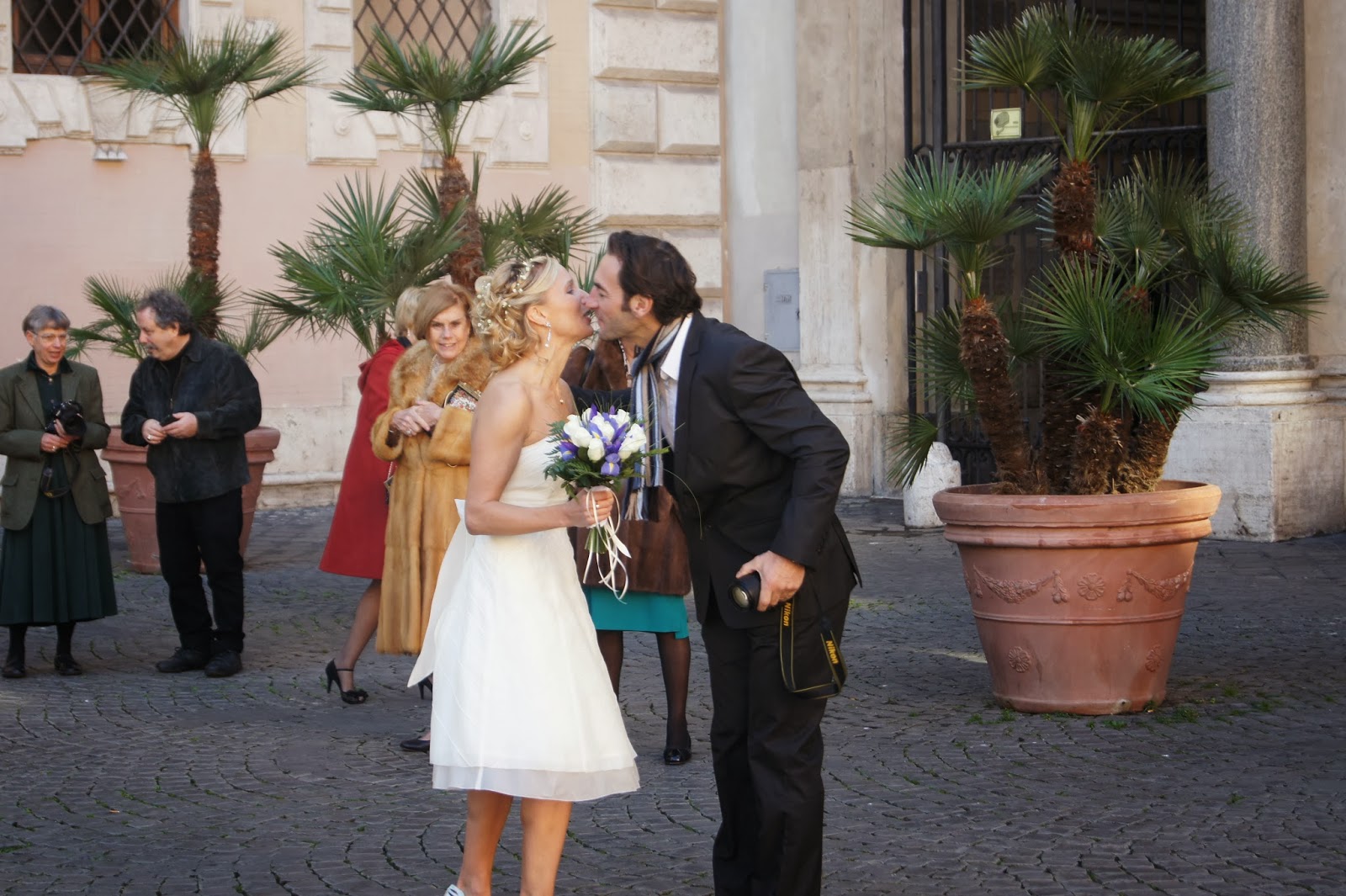 The wedding gets underway at Basilica di Santa Maria 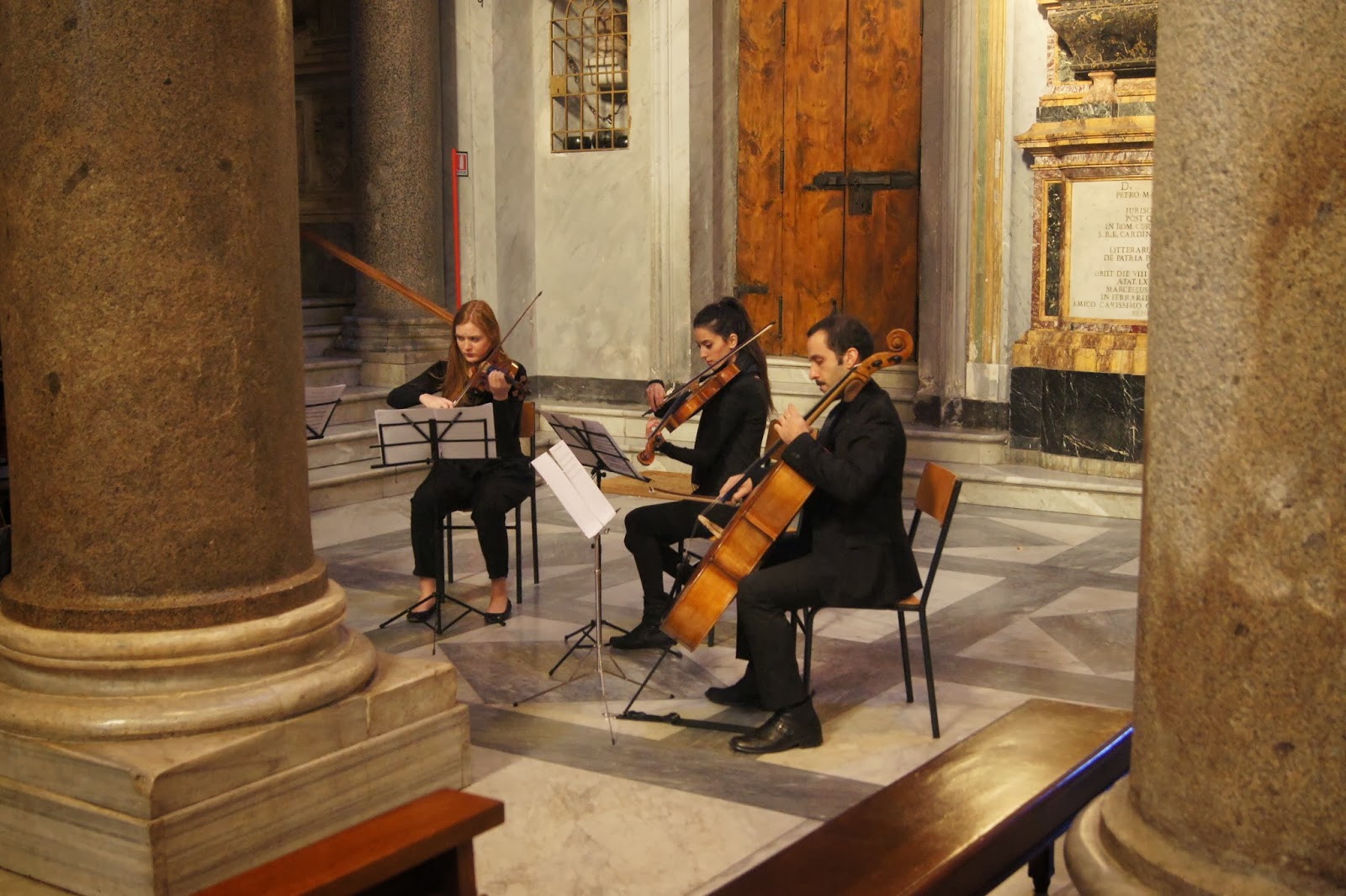 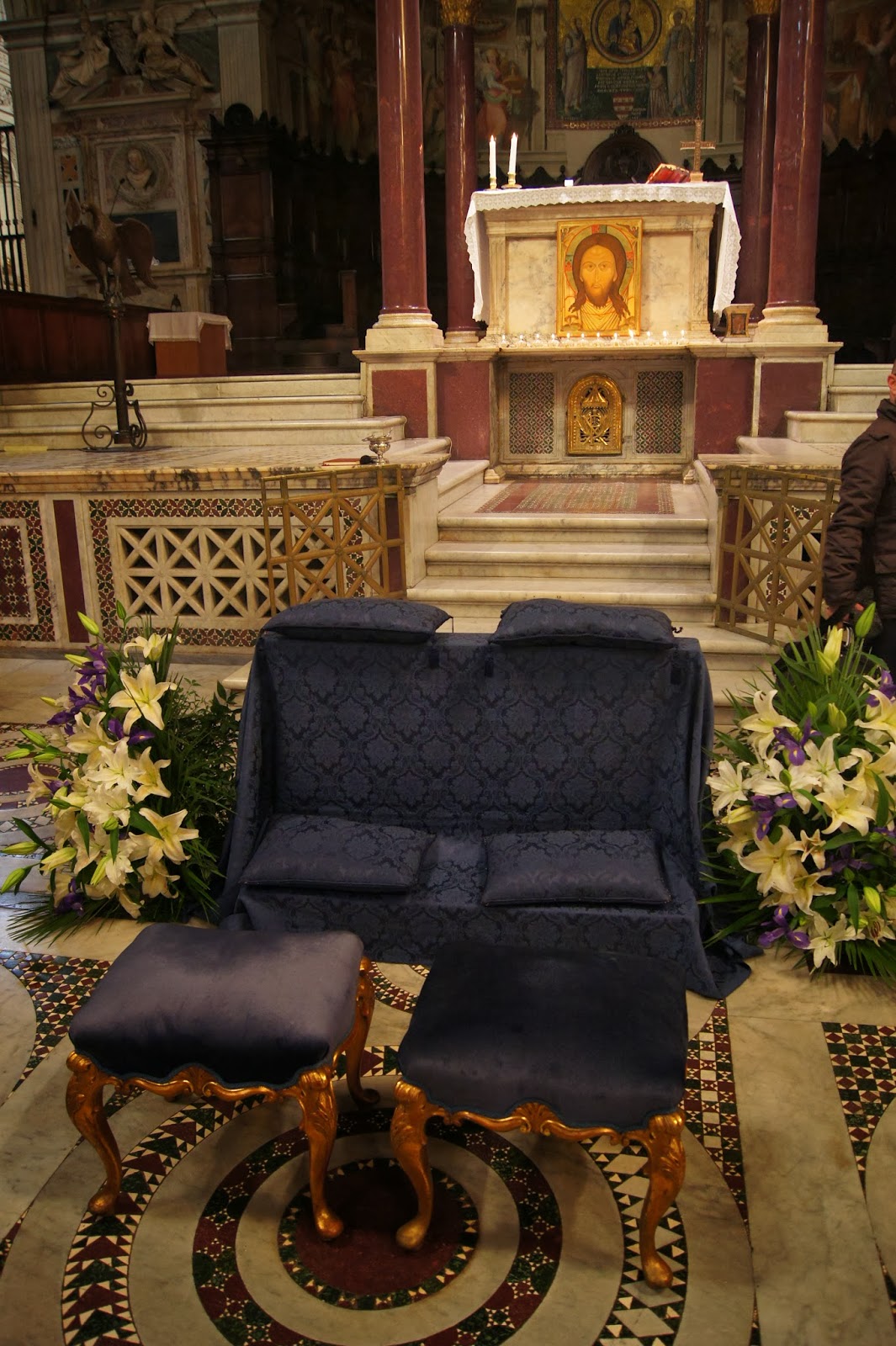 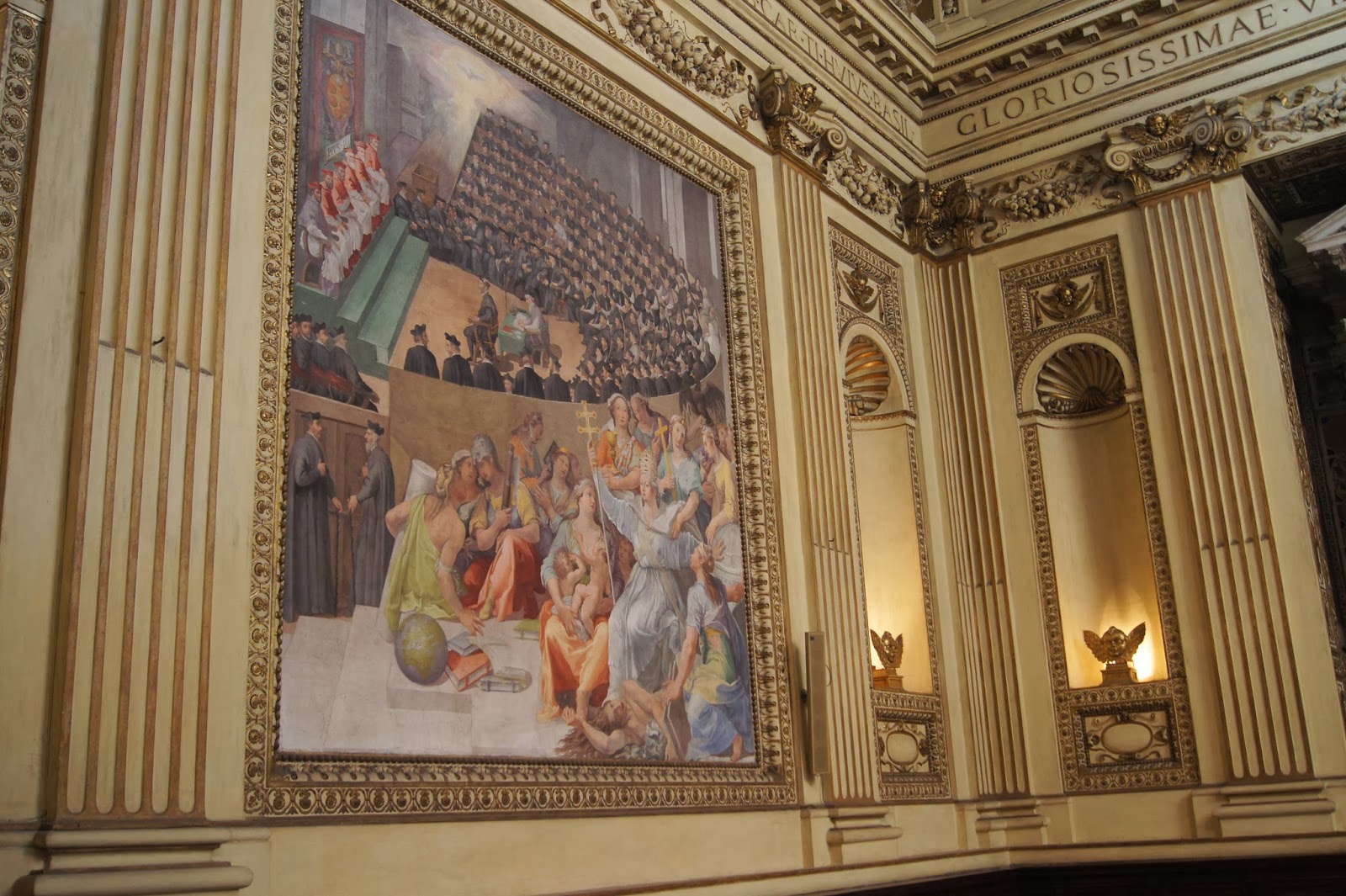 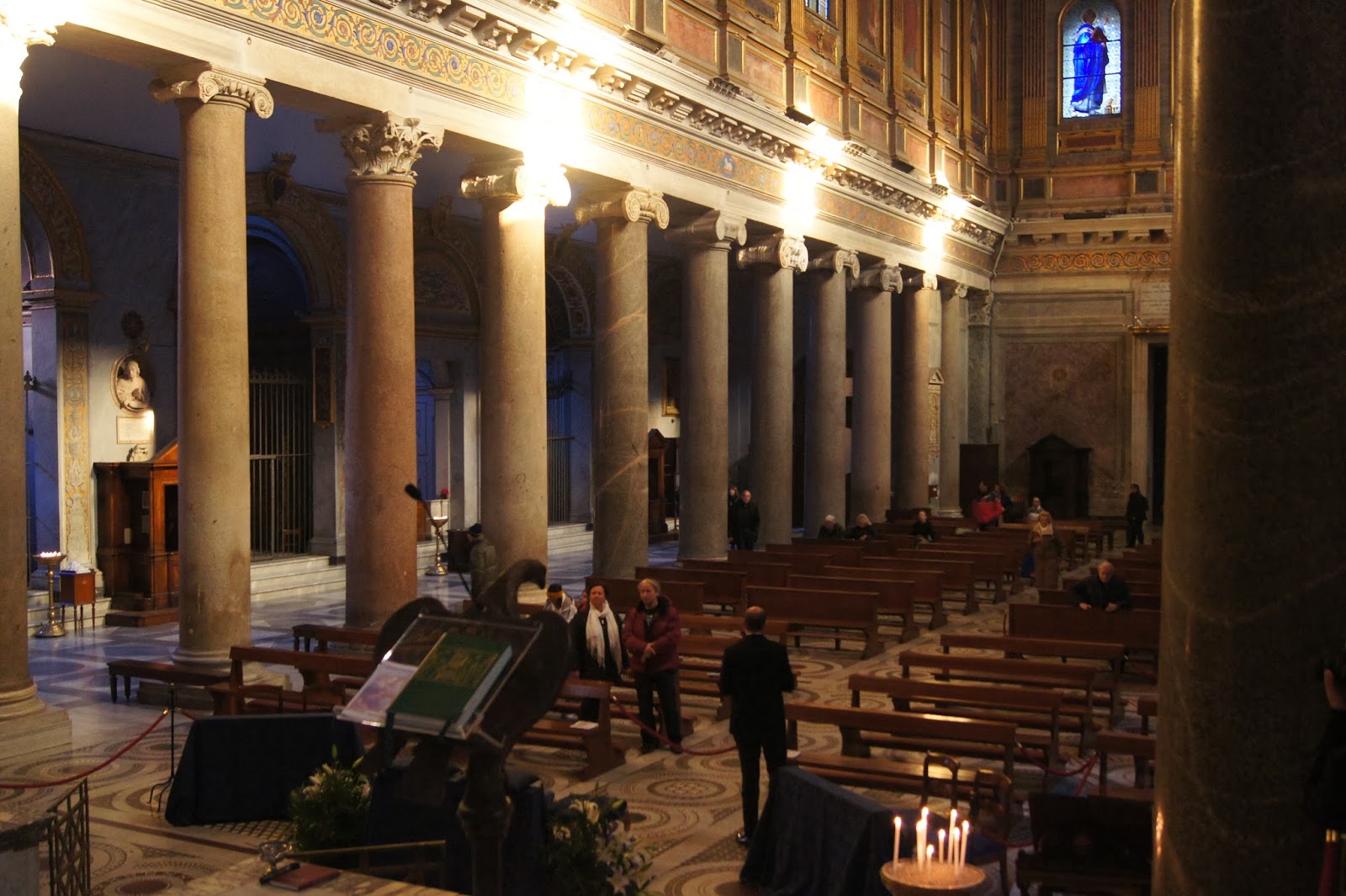 Posted by Dwight the Connoisseur at 11:18 AM