NEW YORK--The added innovations of a thoroughly enthralling boy soprano, in the person of 11 year old Connor Tsui, of the Metropolitan Opera Chorus, and, a  long-necked lute called the theorbo, played by Guest Artist Daniel Swenberg and the conductor playing a small, harpsichord-like instrument called the virginal, give some added punch to an informed and emotive reading of the Holiday classic, Handel's Messiah at the New York Philharmonic. Tonight's performance, Saturday, December 20 at 7:30pm, provides the final opportuniy to see this year's stellar edition. Visit nyphil.org for ticket availability.

Conductor Gary Thor Wedow, in his second appearance since his Philharmonic debut in 2012, leads the orchestra and the Westminster Symphonic Choir of Princeton, New Jersey, in a sensitive and subtly nuanced performance of this deeply moving religious recitative. Wedow, a member of The Julliard School faculty, is specialist in historically informed performances.

An ubiquitous staple of the Holidays, this presentation veers itself away from the overly edited,  high-volume vocal and orchestral pryrotechnics common to many productions. This is a more low-key, scholarly rendition. Employing the Barenreiter edition, edited by John Tobin, it adds many rarely-heard choral sections and arias, including the short introductory recitatives from the boy soprano. I have never heard them in all of my many years of both performing the Messiah as a youth and viewing it as an adult.

Young Master Tsui, singing entirely from memory, while the other soloists worked form the score, displayed a poise far beyond his years, and a clear, decisive tone throughout his short proclomations. Accompanied by Mr. Wedow on the virginal, it was a moment of angelic beauty.

Eschewing the baton to conduct the orchestra and chorus using subtle cues from his supple hands and pointed finger gestures, Conductor Wedow created an enthralling tapestry of sound from the string-dominated orchestra, which featured early period instruments. Trumpet solos, played by Matthew Muckey and keyboard solos from Paolo Bordignon on harpsichord and Kent Tritle on the organ, lent majestic authority to the proceedings,  Handel's Mdssiah is an enthralling performance that is a highlight of the frenetic Holiday Season. It is also one of the few,  profound reminders of its religious roots, which have been, sadly, largely overshadowed by commercialism.

Below: Gary Thor Wedow conducts the New York Philharmonic in his 2012 debut 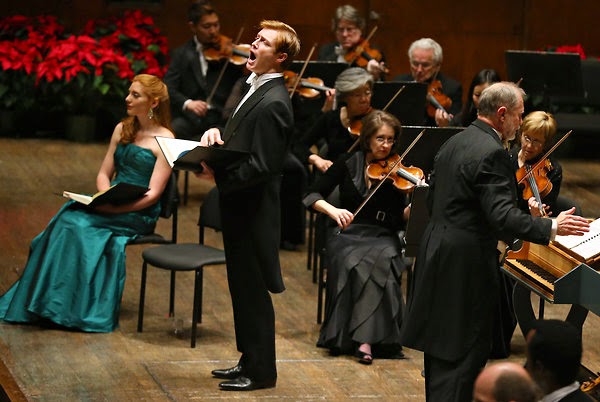 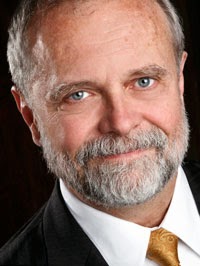 
Posted by Dwight the Connoisseur at 11:33 AM