NEW YORK--Few operas have been so emblematic of the genre and have inspired such loyalty as Guiseppe Verdi's La Traviata. Since its premiere in Venice, that most decadent of cities (next to New Orleans, which in many ways, emulates it with its annual Mardi Gras celebrations,  originating in Venice in the time of the Medicis), has been performed countless times around the globe and is the most popular entry,  on the annual calendars of most opera companies. La Traviata was first performed at the Met in 1883, within a month of the company's opening, and has appeared in all but 15 performances there after a ten year hiatus.

La Traviata is based on the novel "La Dame aux Camelias" (1852) written by the great Black French writer Alexandre Dumas. The opera was originally entitled "Violetta" after the main character, and was premiered at La Fenice opera house in Venice to mixed reviews. The current title "La Traviata" translates loosely to be "a fallen woman," and, as such, was censored by the local authorities who demanded that the opera change its original production from a contemporary setting to sometime in the distant past (c. 1700). It was not until the 1880s that the current "realistic" production that we now see, was staged.

Today, La Traviata is the most performed opera in the world, placing number one on the Operabase list as of the 2012/13 season.

In the opera, Violetta, sung by the beautiful and voluptuous Latvian soprano Marina Rebeka,  is a wealthy "kept" woman, a courtesan, who is a highly paid companion to the wealthy men of her time. She is introduced at a party to a young nobleman, Alfredo Germont. sung brilliantly by native Philadelphia tenor Stephen Costello. At first meeting, she sings to him of her belief in free love, but gives him a camellia and tells him to return when the flower has wilted, which means he will see her the next day. Realizing her gesture will mean an end to her wanton life, she sings of her conflicting emotions, in the first of several familiar arias that are sung with both technical and emotional facility by Rebeka. Her silvery high notes, which are marked with a burnished brilliance and restraint that builds to an eruptive crescendo, are a marvel to behold. Her aria in the Third Act, when she realizes that she is dying, is one of the most spine-chilling moments of the entire Met season.

Marina Rebeka is not only an exceptional singer, she is a consumate performer. Her emotive "dance of death" in which she both celebrates her life and abandons herself to impending death is miraculous. She starts slowly, then begins to spin wildly, like a whirling dervish. The choreography is reminiscent of the death dances practiced by inigenous peoples in Australia and New Zealand.

The spare, modernistic production by Willy Decker, pares the visual elements to the minimum, which puts the focus squarely on the central story line of impending death. A huge clock with an ominous,  figure with white hair and dark suit,  silently watching the proceedings from the sidelines, is an uncomfortable reminder of her fate. The clock advances throughout the opera and finally reaches center stage in the final act, with the ominous figur, the spectre of death, becoming an active part of the action.

The opera chorus, directed by Donald Polumbo, with extensive choreography by Athol Farmer, is an intregal part of the action. Dressed in monochromatic costumes and donning masks that mock the central character in bizarre, cartoonish fashion, they are like a choreographed Greek chorus, telegraphing the story's progression through song and skillfully plotted dance. Set and Costume Designer Wofgang Gussman created an atmosphere in which contrasts in colors and textures, with eye-popping focal points, such as brightly colored fabrics draped over the sparse furnishings and, sometimes, an almost bare-skinned Violetta.  Genoa, Italy-based conductor Marco Armiliato  finds just the right pacing to bring this moving train of a tale from the vortex of the heroine's troubled beginnings to its fatal conclusion.

La Traviata is Grand Opera at its finest, with a meteroic rising star in the lead role and a virile, golden-voiced tenor, Stephen Costello, as her leading man, Alfredo. Quinn Kelsey, a young. robust baritone from Honolulu, does a terrific job of conveying the gravity of the role of the elder Giorgio Germont, Alfredo's disapproving father.

Sadly, Traviata is not on the schedule for any upcoming Met Live HD performances. With the removal of The Death of Klinghoffer from the schedule due to protests earlier this season, perhaps a last minute addition to the roster might be considered. It would be a shame for the world to miss out on this tremendous remounting of a production and its stellar cast. The next Met Live HD production is Lehar's The Merry Widow in a New Production with Renee Fleming, Saturday, January 17, 2015 at 12:55pm ET with a U.S. Encore Wednesday, January 21 at 6:30pm local time. Check metopera.org or fathomevents. com for theatre locations and tickets. Upcoming La Traviata performances are December 22, 27 and 30 and January 7, 10, 14, 17, 21 and 24. Check metopera.org for showtimes and tickets.
Bulgarian soprano Sonya Yoncheva assumes the role of Violetta from January 14 on. Yoncheva made her Met debut as Gilda in Rigoletto in 2013. 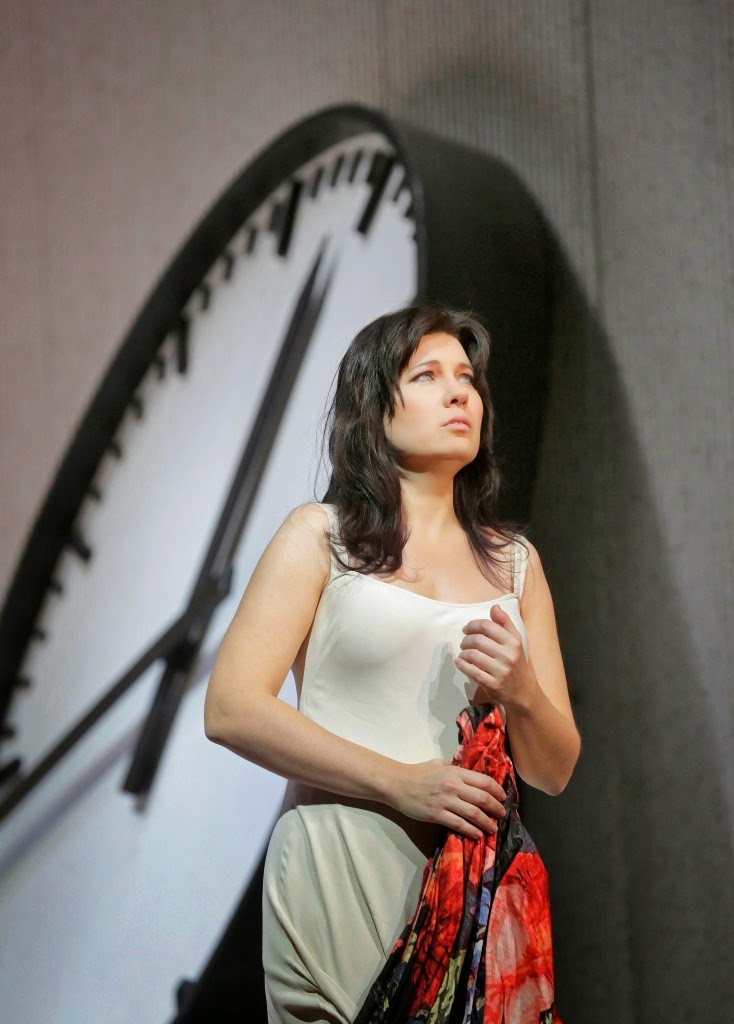 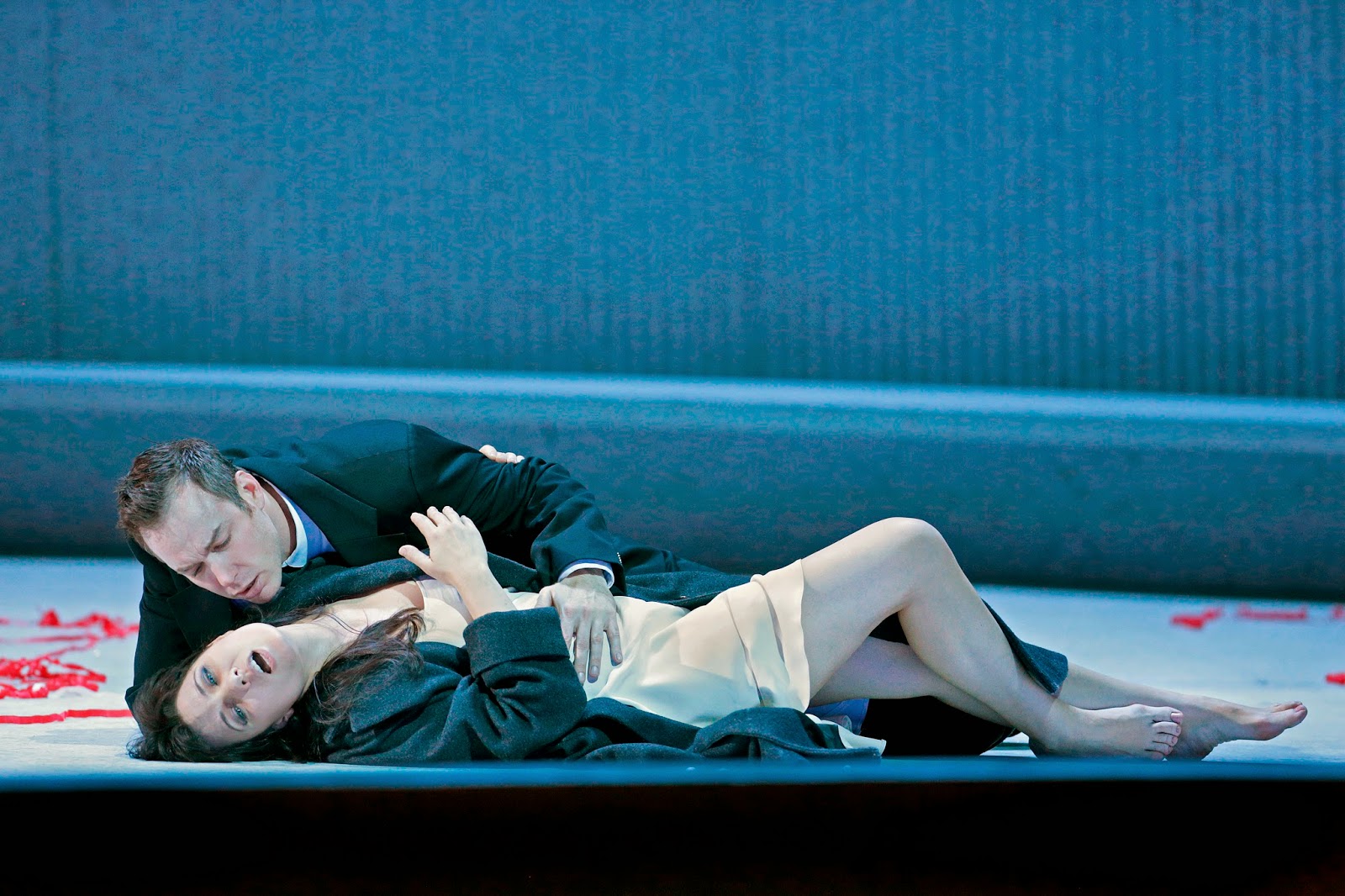 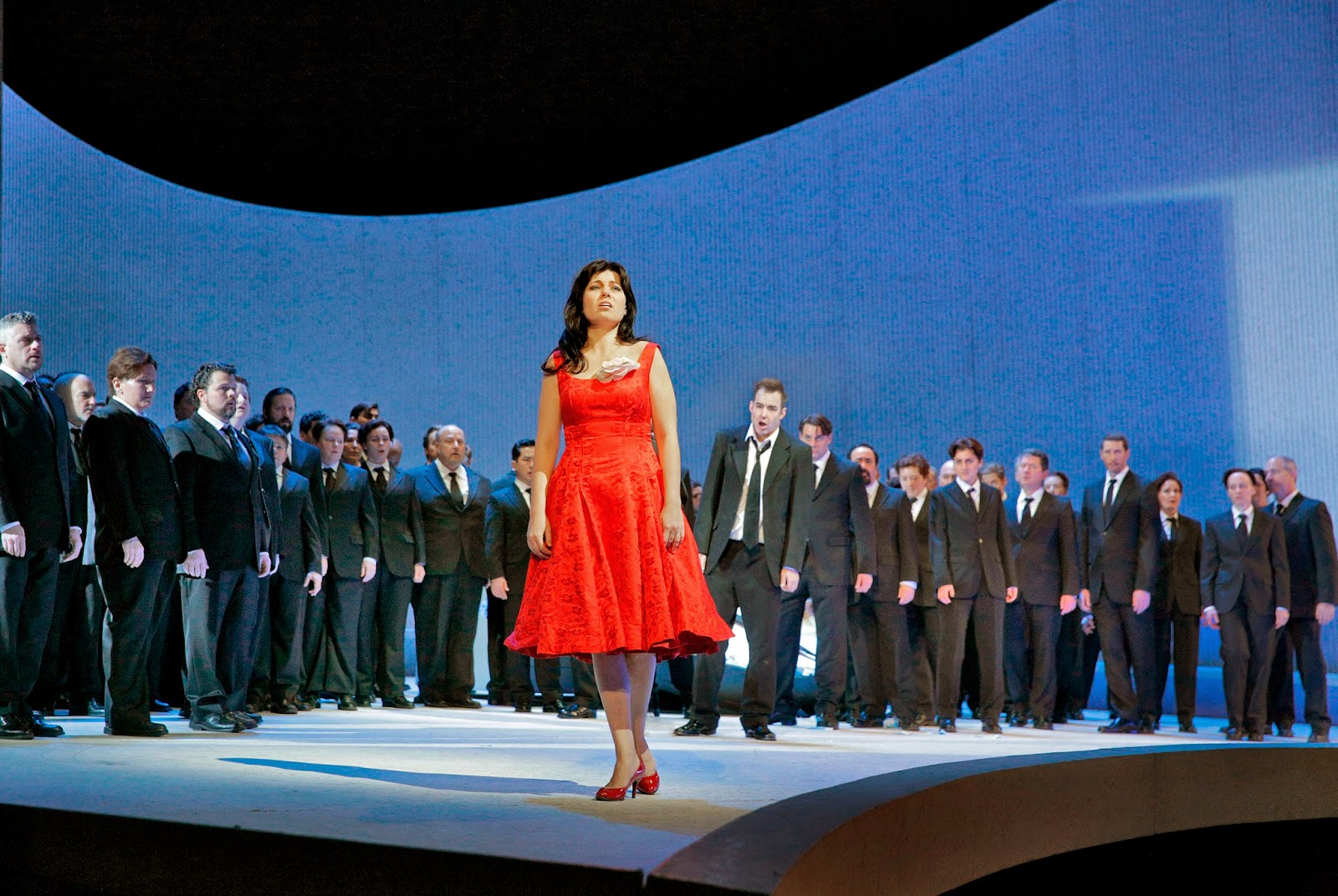 Posted by Dwight the Connoisseur at 2:52 PM