VENICE, Italy--When Curator Okwui Enwezor was selected to oversee the 56th International Art Exhibition, he had a very clear vision. "All The World's Futures is informed by a layer of three intersecting filters. The three filters represent a constellation of parameters, which will be touched upon in order to image and realize a diversity of practices.

The goal of the three filters is to describe both the current state of things and the appearance of things. With each filter superimposed on the other, the 56th International Art Exhibition will delve into the contemporary global reality as one of constant realignment, adjustment, recalibration, motility, and shape-shifting. It will play host to what could be described as a Parliament of Forms whose orchestration and episodic unfolding will be broadly global in scope."

As such, the installations at the various national pavilions were overwhelming political in nature, with stunning social commentary and disturbing images. Almost to the letter, they reflected the shifting social tides and internal conflicts in their home nations and were uncompromising in their depictions of institutionalized brutality. The art is vivid and often violent.

Of the 89 participating countries, five are participating for the first time; Grenada, Mauritius, Mongolia, Republic of Mozambique and Republic of Seychelles. Ecuador, the Philippines and Guatamala are returning after years of absence (1966, 1964 and 1954, respectively). There are also 44 collateral events scattered in public and private sites throughout the city. Like the exhibits in the main pavilions, these are also fraught with controversy, such as a long-shuttered church which has been transformed into a Mosque. 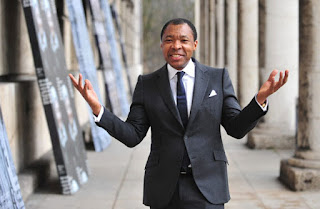 And that's just the first room in the Arsenale, there are acres of art, most of it steeped in controversy, yet to come.

Unlike early La Biennale's, when French Impressionists ruled the day, there are no pastel colors, guazzy whimsical daubs of paint or pastoral images to sooth the eye. The images are hard-edged and the forms hard-edged and made from structural steel and discarded objects, including spent artillery shells!

There are knives planted in desks, images of whales harpooned to death on Japan's open sea and Christian Boltanski's film of a man coughing up blood.  This is not a biennale for the faint of heart or for those looking for pretty aesthetics and pastoral themes. 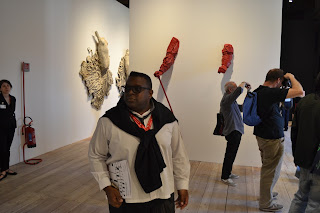 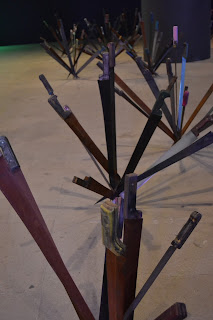 Adel Abdessemed's "Nympheas" depicts a series of sugar cane machetes stuck in the floor in a pattern resembling a flower  burst. The name references  Claude Monet's Water Lily series, but machetes are anything but flowers. In the same room are Bruce Nauman's neon signs flashing the words "DEATH," "WAR," and "STICK IT IN YOUR EAR."  The installation is entitled "American Violence." 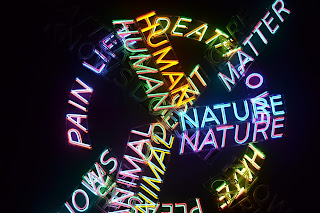 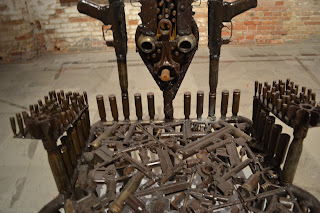 Goncalo Mabunin from the Republic of Mozambique's installation is a series of ornamental thrones. They all look quite regal and ceremonial at first glance, until a closer look reveals that they are made from spent armaments and munitions; spent heavy artillery shells, firing pins, and pieces of decommissioned assault rifles.

(Below) The next room proves the point. Walking through New York sculptor Melvin Edward's series of fist-sized steel sculptures is like walking the gauntlet. They are welded together pieces of manacles, axes and chains, all grim reminders of slavery. 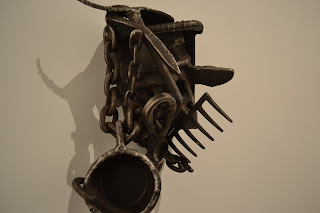 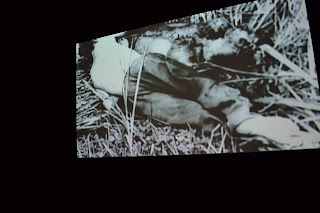 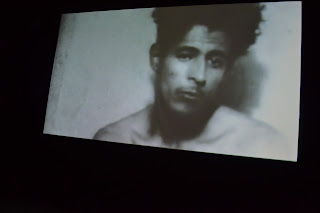 A film installation in the Brazil Pavilion depicted a lone runner cruising through the poorest sections of Rio, which was made to resemble the inside of a prison. A photo exhibit showed closeup images of the faces and mangled bodies of young boys, who lived in the street, who had been brutally beaten, tortured and shot to death by police. Another series of outsized portraits, featured breast-feeding women wearing ISIS-type masks. 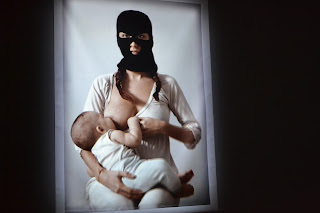 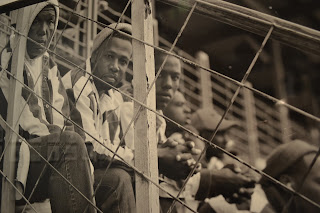 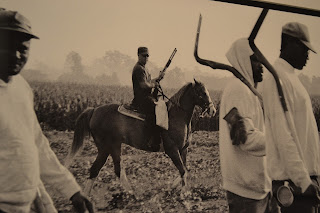 Another photo exhibit by Keith Calhoun in the Central Pavilion showed black and white photos of prisoners working in the fields of Angola Prison. They are watched over by men with rifles on horseback. What is most disturbing about the images is that, without looking at the descriptive placard on the far wall, one would assume that the images were taken sometime in the early twentieth century, when lynchings were commonplace, or in someplace like apartheid South Africa, where subjugation of the indigenous  blacks was the norm. Instead, shockingly, the photos were taken in America, in Louisiana, specifically, in 1980. 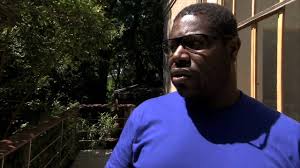 Steve McQueen's Turner Award winning narrative film, also shown in the Central Pavilion, entitled "Ashes," told the story of a young, charismatic fisherman, nicknamed Ash, who was killed shortly after the director's initial filming expedition in Grenada by a gang of drug smugglers. Because he was not a member of a Christian church,  according to Grenadan custom, the boy was buried in an unmarked paupers grave. McQueen, winner of the 2014 Academy Award for his film "Twelve Years A Slave," vowed to return to Grenada, investigate the cause of the boy's death and give him a proper burial. The film marries early footage of the young fisherman's carefree days and the subsequent ceremonial exhumation and entombment of his body. McQueen's production company paid the full expense of Ash's re-burial. 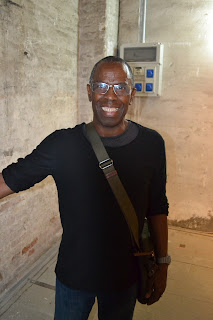 Sierra Leone artists Abu Barr Mansaray's work depicts fighter planes, anti-aircraft weapons and other implements of war all assembled in cartoon-like garish images in a canvas series entitled "Sinister Project," an obvious reference to the internal conflict in his homeland. 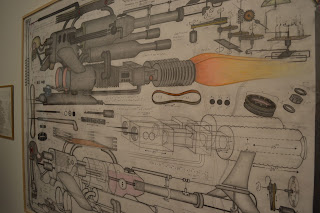 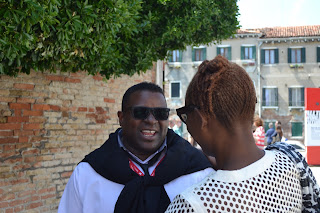 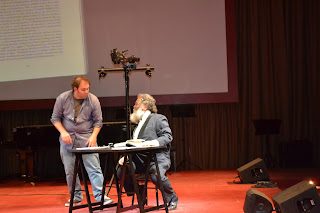 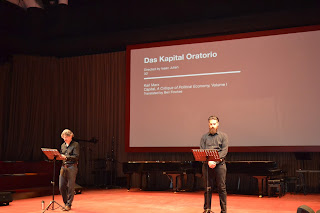 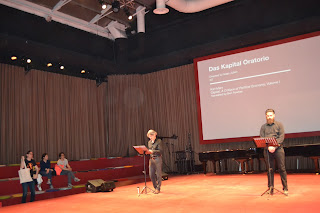 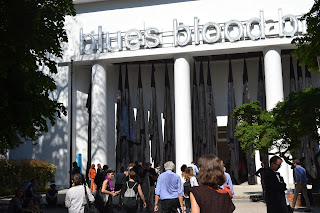 The Central Pavilion is emblazoned with the neon title "Blues, Blood, Bruises." Black drapery made of industrial rubber is illuminated at night for dramatic effect. The Central Pavilion was designed by Ghanaian-born architect David Adjaye, whose office is based in London.

Organized by Okwui Enwezor, Nigerian born and long-based in Europe, he is a veteran of the international art circuit  and is known for his topical and controversial exhibits. In addition to addressing the issues of institutionalized violence and labor inequality, Enwezor also gives free reign to the possibilities of political transformation and all of its inherent complexities.  He makes no apologies for the overtly political nature of the exhibition, which is brilliant in its execution. One walks away with the feeling of being hit by a sucker punch that knocks your wind out and leaves you
spent, but feeling that you'd like to see it all again, just to make sure you didn't miss anything. The 56th International Art Exhibition-La Biennale di Venezia, runs through November 22, 2015. For information, visit www.labiennale.org.

Posted by Dwight the Connoisseur at 1:35 PM