ALL MOZART AT THE NEW YORK PHILHARMONIC JUNE 3-6 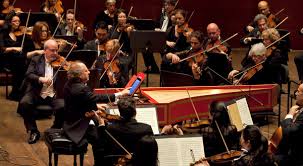 Guest Conductor Jeffrey Kahane conducts from the keyboard and (below) from the podium at NewYork Philharmonic's All Mozart program
Photos: NY Times 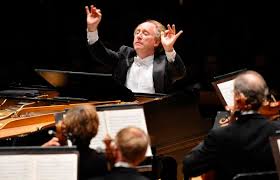 NEW YORK—California native Jeffrey Kahane brought a solid measure of his home state’s celebrated sunlight to his performance of the New York Philharmonic’s final subscription concert of  the season at Avery Fisher Hall, an All Mozart program of the composer’s Piano Concerto No. 21, Symphony No. 38, Prague and Piano Concerto No. 20. The Philharmonic begins its popular summertime Concerts in the Parks, starting with  Central Park Wednesday, June 17.

Symphony No. 38, the “Prague,” is arguably one of Mozart’s most popular. It is certainly the one with the most recognizable “tunes” which fans of the composer will also recognize in the operas “Don Giovanni” and “The Marriage of Figaro.” Esteemed conductor and musicologist Kahane let none of the work’s familiarity prevent him from imbuing it with a freshness and vitality that place Mozart’s cornucopia of musical ideas like a newly faceted diamond atop a finely crafted setting provided by the slimmed down version of the New York Philharmonic, in full Classical period mode, with some instrumentalists, trumpeters in particular, playing period instruments.

Mozart’s life and work is most often associated with the musical capitol of Vienna, but, it is in Prague where he achieved his greatest celebrity. Where, for example,  Vienna met his forays into opera with polite skepticism, Prague rolled out the Red Carpet and met him with a hero’s welcome.  Symphony No. 38 is a virtual love note written for and bestowed upon the city of Prague in a series of performances there in 1787 of the newly completed work.

Kahane and company quickly showed why this is one of Mozart’s most indelible works. Using his supple hands like a sculptor’s to mold and shape the dynamic shift in tempo from the slow introduction to the opening Allegro movement, to later reveal its arching themes that seemed to reach into a future-world of chromatically dissonant themes. Trained ears will also recognize the same themes in Mozart’s later operas, Don Giovanni and Le Nozze di Figaro, which he would  premiere in Prague. (Mozart is said to have been writing a movement for the Prague symphony at the same time that he was working on Figaro.) In many ways, the city had become his esthetic home and musical laboratory with his shingle hung out for all to see: ‘Genius at Work.’

Kahane opened and closed the program with Mozart’s Piano Concerto’s No. 21 in C Major and No. 20 in D minor, in which he, like the composer, acted as both conductor and solo pianist.

Mozart was fast becoming recognized as a virtuoso pianist and had begun composing concert platforms for himself  in  rapid succession during the years 1782-1786. His musical trajectory would propel him to the very center of Viennese concert life and prompted his friend and mentor, the esteemed  Franz Joseph Haydn to personally declare , in a letter to the composer’s father, Leopold, the words, “I tell you before God, as an honest man, that your son is the greatest composer I know.”

Kahane played and conducted brilliantly in both of the piano concertos, lending his own cadenza to the concluding Piano Concerto No. 20 and also performing the rapid-fire succession of notes in the cadenzas composed by Beethoven for the final movement.  Kahane’s playing of the flurry of notes was crystalline.

His further judicious use of the pedal may have reflected Mozart’s own notations on the work, which may have referenced his playing on the Pedal Piano, which Mozart had constructed for him by a Viennese instrument builder.

Kahane occasionally arose from his piano to urge the orchestra forward in the restless passages that set the keyboard parts in bas relief against the exceptional playing of the ensemble, in particular the ringing declarations from the trumpets and the firm resonance of the timpani.  It was one of the most musically satisfying concerts of the year and a fitting finale to the subscription season.

Posted by Dwight the Connoisseur at 6:41 AM