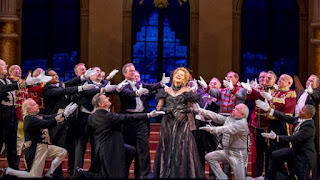 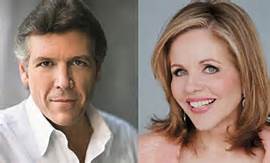 There is no better tonic for the tragic and traumatic events in Paris than a night in its greatest era, La Belle Epoque, in 1905, as depicted in Lyric Opera's New-to-Chicago production of Franz Lehar's "The Merry Widow."

The performance is full of life and laughter, with abundant romantic clinches and complications. With a spectacular production and sometimes acrobatic dancing directed and choreographed by Susan Stroman,  lavish sets by Julian Crouch (both in their Lyric debut), elaborate costumes by William Ivey Long, and inspired conducting by Conductor and Lyric Music Director Sir  Andrew Davis in the pit, this was a thoroughly delightful evening.

The libretto for The Merry Widow by Viktor Leon and Leo Stein is based on the comedy L'attache d'ambassade written in 1861. Originally sung in German, it is translated here by Jeremy Sams and performed with supertitles above the stage of the Ardis Krainik Theatre.  Although spoken and sung in English, the supertitles seemed necessary because at times, the amplified speaking parts were muffled and some of the sung words could not be understood over extended vocal and orchestral lines. 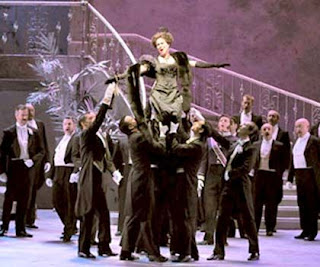 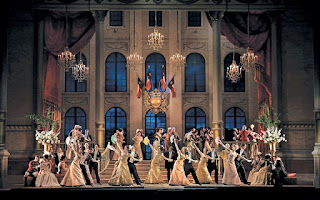 The plot is a simple one. In fact, it provides just enough to drape Franz Lehar's sumptuous score around. Beautiful Hanna is newly widowed. Her husband has left a fortune behind, quoted often in the opening act setup as "twenty million"(euros? dollars?, but, you get the idea). In fact, her newly gained fortune is enough to rescue her fictitious homeland of Pontevedrian from bankruptcy. The ambassador from that country sets the wheels in motion to find her a proper husband from her homeland. The free-wheeling widow has another suitor in mind, the confirmed bachelor Count Danilo, played and sung brilliantly by Thomas Hampson. His entry onstage is one of the great comedic moments in opera. The mark of the Tony Award-winning director/choreographer Stroman is all over this production. Comedic timing is perfect throughout, with Hampson leading the way.

Renee Fleming is in top form, delivering a commanding performance. The high point, of course, is her performance of the familiar aria "Vilja." It was finished with a dramatic flourish that seemed to ring throughout the hall. It brought a well deserved ovation.

Supporting cast members weighed in with some memorable moments; Bass-baritone Patrick Carfizzi in his Lyric debut as the pompous Pontevedrian ambassador, Baron Mirko Zeta and Heidi Stober as his young wife, Valencienne, also in her Lyric debut.

The Merry Widow, through December 13. For information, visit www.lyricopera.org.

Posted by Dwight the Connoisseur at 3:07 PM