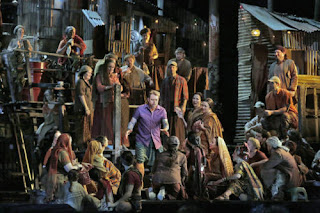 Wednesday, January 20 at 6:30pm local time marks the Encore Performance of the Met Live HD transmission of  Bizet's "The Pearl Fishers" (Les Pecheurs de Perles). Last seen at the Met a hundred years ago, with the great Caruso in the title role, this current staging, a co-production with the English National Opera, incorporates unique staging which involves space-aged technology that only could be imagined at the time of Bizet's creation in the mid 1800s.

Brilliantly staged by British director and filmmaker Penny Woolcock, who previously mounted the Met's groundbreaking production of "Doctor Atomic" and "The Death of Klinghoffer," employed acrobatic dancers suspended from invisible wires on tracking devices borrow from NASA to simulate weightlessness in space flight, and a multi-dimensional video projection that made them appear to be actually swimming in the deep, like real pearl fishers. This opening effect alone is worth the price of admission!

Although this is one of Bizet's earliest works and it is rarely performed, opera lovers might recognize two of its oft-sung arias, the gripping male duet "Au fond du temple saint, which features tenor Matthew Polenzani and baritone Mariusz Kwiecien as Nadir and Zurga, the two pearl fishers, who compete for the love of the virginal high priestess Leila, sung with exquisite style by soprano Diana Damrau.

Costumes by Kevin Pollard, and sets by Dick Bird, combined elements of  Far Eastern tradition and the hard-edged reality of modern day shabbiness to create the time-shifting atmosphere of the opera, which married ancient ritual with the realities of natural disaster (a Tsunami and a massive fire).

The story makes almost no sense, the fishermen, Nadir and Zurga, are locked in a headlong struggle for the affections of the priestess, Leila, who must remain a virgin in order to stem the fury of the impending tidal wave. When it hits, and the high priest Nourabad (sung with regal authority by bass-baritone Nicolas Teste)  discovers that Nadir and Leila have been doing more than holding late night seances, the pair get blamed for inciting the calamity. Pile on the Zurga's jealous rage brought on by the realization that Nadir has broken  their mutual vow to steer clear of the royal beauty in the name of lasting friendship and you have the makings of a love-triangle bent on a tragic outcome.

Kwiecien is especially protean as Zurga, when he sings of his jealous rage in the third act after removing his shirt, drenching wet from the tsunami. Leila/ Damrau, gives the most stirring performance of the opera as she pleads to Zurga to spare Nadir from the ritual death he has decreed for both of them.

The opera ends, implausibly, with Zurga setting a huge fire to distract the villagers, so that he can free the two lovers from the ritual execution he has ordered. No matter, the sets, the singing and the pearl fishers, both onstage and behind the video screen, were magnificent and worthy of a second viewing, which tonight's Met Live HD Encore Presentation affords. Check local listings for theatre locations. The next Met Live HD transmission is Saturay, January 30, at 1pm,  Puccini's Turandot with sopranoNina Stemme as the vengeful ancient Chinese princess. 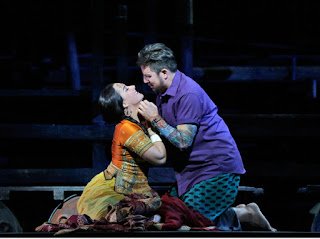 Posted by Dwight the Connoisseur at 1:03 PM