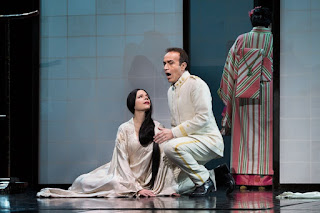 Credit the superb staging and production design of Anthony Minghella, direction and choreography of Carolyn Choa, set design by Michael Levine and the imaginative puppetry of Blind Summit Theatre, with salvaging what might have been a rather hum-drum season premiere of the Metropolitan Opera's current offering of Puccini's Madama Butterfly.

Gibraltar-born conductor Karel Mark Chichon, the current Chief Conductor of the world-renowned Deutsche Radio Philharmonie infused Puccini's ground-breaking orchestrations with an urgency and vitality that, at times, overshadowed the performances on stage. Soprano and Houston native Ana Maria Martinez, stepping in for an ailing Hei Kyung Hong, showed glimmers of the conflicting angst felt by the named lead, Cio-Cio San, who suffers the ridicule and disgrace of her family and culture by embracing the Christianity of Pinkerton, the American Navy Lieutenant to whom she is wed in a sham "wedding." Sung by Sicilian tenor Roberto De Biasio, who seemed to tip-toe around the character, his sweet voice would inexplicably vanish into thin air whenever it was drowned out by Puccini's lush orchestrations. Soprano Martinez  seemed to gain her footing in the beautiful "Un bel di," the signature aria of this seminal work. Once out of the shadow of her lackluster co-star. Martinez seemed to blossom and take flight, much as her namesake, Butterfly. 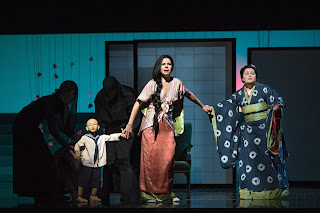 Ana Maria Martinez as Butterfly with her handmaiden, Suzuki, sung by Maria Zifchak with her love-child puppet provided by Blind Summit Theatre.


Madama Butterfly tells the story of Cio-cio-San, the teenaged geisha whose family's fall from grace has led her to be bartered like a piece of chattel, along with a house and gaggle of servants to American Navy Lieutenant B.F. Pinkerton at the height of U.S. Imperialism and the Manifest Destiny that began to unfold at the start of the 20th century. The deal is brokered by Goro, sung by Tony Stevenson in his Met debut, and U.S. Consul Sharpless, sung with smarmy smugness by Polish tenor Artur Rucinski, also in his Met debut. 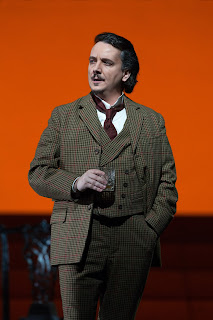 Artur Rucinski in his Met debut at Sharpless


Butterfly is given to Pinkerton almost an an accessory to the house he has leased "for 999 years." A phony marriage ceremony is hastily arranged. The 15 year old Butterfly is just as convinced of its validity as Pinkerton is of its  being just another meaningless peculiarity of Japanese culture. One can almost hear the gears turning in the back of his, planning his hasty return home once his tour of duty is completed to claim his American wife. His attitude is the ultimate representation of Manifest Destiny Imperialism which dominated the Western world view of the East at the turn of the last century.

Butterfly's tragic ending is telegraphed from the beginning. When her handmaiden, Suzuki, sung with  an assured ease by Met veteran Maria Zifchak, attempts to clear out Butterfly's old belongings in preparation for her wedding, Butterfly admonishes her not to throw away her most prized possession, the dagger her father used to commit ritual suicide at the behest of the Mikado. She eyes it almost lovingly, as if anticipating its kiss of death.

Soprano Martinez seemed at her vocal and dramatic best when she stepped away from the colorless shadow of her co-star. She seemed to come to life and at the conclusion of Act II, Part I, when Butterfly and Suzuki strewed the house with flowers in anticipation of Pinkerton's return.

Additionally, some of the most artistic scenes in the entire performance were provided by some of the opera's ancillary elements; the dancers and the chorus.  Butterfly and Pinkerton's love-child was portrayed by a life-sized puppet operated by two puppet masters shrouded in black from Blind Summit Theatre. Their pantomimed dance with two puppets representing the romance between Butterfly and Pinkerton was one of the highlights of the entire staging, which drew the audience into the emotional vortex of the opera and riveted its emotional impact.

Also, the use of lanterns and origami flags by the dancers and chorus gave much needed visual punctuation to scenes during the lush orchestral interludes. They were expertly conducted by  guest conductor Karl Mark Chichon. The orchestral passages were instrumental in advancing the story in and of themselves. 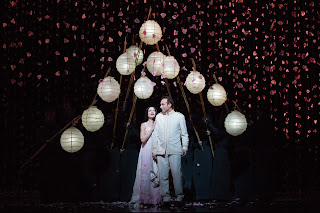 Lanterns, origami, puppetry, confetti and sliding silk panels are elements borrowed from Japanese theatre and artistry were the  visual elements that punctuated the story of Madama Butterfly


Have no fear, brighter days are ahead for Butterfly, so feel free to plan a future visit. The indisposed Hei Kyung Hong assumes the lead February 27. A new cast assumes the helm March 17 with the sultry Kristine Opolais, now electrifying the stage as Manon Lescaut, in the title role, with the indefatigable Roberto Alagna, also her co-star in Manon, as her Pinkerton. The serious money says this combination is sure to ignite fireworks. Visit metopera.org for more details.

Posted by Dwight the Connoisseur at 11:37 AM