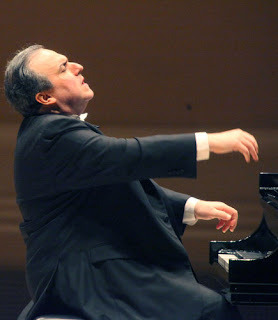 There's no question that Franz Liszt was the undisputed piano virtuoso of his time, playing the concert halls of Europe to standing ovations through much of the mid-19th Century. Although he wrote numerous challenging pieces for piano and orchestra, there are only two numbered full-scale concertos that bear his name. Grammy Award-winning pianist  Yefim Bronfman, the New York Philharmonic's 2013-14 Mary and James G. Wallach Artist-In-Residence gave a brilliant accounting of the work with the young Russian conductor, Juraj Valcuha, the Chief Conductor of the Orchestra Sinfonia Nazionale della RAI, Torino, Italy as guest conductor.

Clocking in at just under 20 minutes, the relatively short duration of the piece in no way diminishes its Romantic beauty. Bronfman carefully built the slow opening measures with a light, unhurried approach, before unleashing the full measure of his superior technique in the ensuing Allegro agitato. Conductor Valcuha did a masterful job of framing Bronfman's magnificent playing with restrained tempos and carefully balanced passages from each of the orhcestra's  sections. The bracing finale gave everyone the thrilling ride they had hoped for, with Bronfman diving into the Allegro animato with surety, dispatching the notes with a dramatic flourish, yet allowing each of them to ring with distinction.

The concert was bookended by two climactic tone poems that are virtual beacons in the annals of modern 20th century composing; Zoltan Kodaly's energetic and almost cinematic Glantai Tankoc (Dances of Galanta), which preserves the whirling dervish frenzy of Hungarian Gypsy dances, long since vanished, and Maurice Ravel's sardonic and equally frenetic LaValse, said to be his musical commentary on the ravages wrought by the first World War. A haunting clarinet solo played with heartfelt yearning that reminded one of the reed player Yusef Lateef (1920-2013), was the most outstanding element of the Kodaly. Guest conductor   Valcuha brought a youthful vitality to the Ravel, which garnered a much-deserved thunderous ovation.
Posted by Dwight the Connoisseur at 4:48 PM