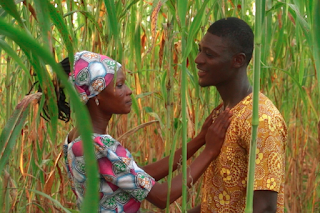 NEW YORK--NAKOM is a beautifully filmed, sensitive portrait of a Ghanaian medical student, Iddrisu (Jacob Ayanaba) who is suddenly called to return to his family's remote African farming village from his studies in the capital city of Akkra, when his father suddenly dies.

TWPittman is making her feature directorial debut with NAKOM. The film is unique in that is it filmed entirely on location in Ghana, primarily in the rural village, from which the film derives its name, and in which Pittman once served as a US Peace Corps volunteer. Previously, she produced the feature Sombras De Azul, which was set in Cuba, and is the only Cuban-American co-producton in the 50 year history of the U.S. embargo.  NAKOM breaks similar ground. It is a Chanian-American co-production, which is co-written by Isaac Adakudugu, who is a native of the title village. Their mutual involvement and experience shines through in this brilliantly executed film.

From the outset of the film, we get a sense of the dichotomy experienced by Iddrisu. We hear a car speeding down the highway and immediately see the sun rising over the awakening village of Nakom. Herders and the other villagers are going about their daily routines and, a moment later, we see the hustle and bustle of the morning rush hour traffic in Accra. Issidru is joyfully going about his daily routine as a medical student at the university. Kibitzing with friends as he rushes, late to class and trying to charm his disgruntled professor with that winning smile of his. Back in his dorm room, he gets a call with the bad news. His father has just been killed in a motorcycle accident and he's needed urgently back home. Arriving on a crowded bus, he gets a  ride on the back of a motorcycle borrowed by his kid brother from the pastor's wife. Along the way, Iddrisu gets a visual crash course, reorienting him to the world he left behind

His sister is cooking the evening meal and sarcastically says to him that she is surprised that he still speaks Kusaal, their native language. When he visits his mother in mourning, we get a clear picture of the dilemma he will face. When he tells her that he will only be there for a short time to attend the funeral, she lays a guilt trip on him, saying that she knows he will live up to the responsibilities he owes to his family and the village.

A visit to his Junior Mother (apparently the men who rule the villages have more than one wife), doesn't go much better. We learn from her that the father left a significant debt behind that has to be repaid and it is up to him, as the oldest son, to repay it.

Finally, he lets loose his grief, removing the shroud from his father's face and shedding tears.

Nakom quickly trades in his school books for a pickax and begins the sequeless transition into village life. While he struggles to dig his father's grave in the drought-hardened earth.  His brother and another villager tease him as "the bachelor chief" because of his new position as an unmarried man who now occupies his father's house. Iddrisu doesn't take kindly to the teasing. "Do your arms work, or only your mouth?" he retorts, throwing the pickaxe in their direction.

The uncle has sent word that he refuses to come to the funeral, apparently angered by a property dispute.  An impatient Iddrisu decides that the show must go on without him. We then witness a traditional Muslim burial, with the body carried to the grave by Iddrisu and his brothers and the women of the village trailing behind, wailing and crying. The sun sets, and with the evening prayer, the events of the film are set in motion.

Iddrisu visits his uncle, attempting to broker a compromise. "How can I fight with him?" the uncle says of Iddrisu's father. "It''s like one arm fighting the other!" A deal is brokered, and Iddrisu agrees to take charge of the harvest of the next crop, using the profits to settle his father's debt. The uncle  kill a live chicken in celebration of the deal.

Iddrisu tells his mother that he plans to return to the university once the debt is repaid from the harvest. His mother isn't having it and derides him for being a coward for turning his back on his family and his responsibilities as the new head of the village.

Mobilizing the village to begin the planting and harvest, he decides to move the farm to his uncle's richer soil. He then develops a new marketing strategy to increase his profits once the harvest is complete, thus earning the money the village needs to pay his father's debt.

The behind-the-scenes facts of NAKON are as ground-breaking as the film itself. It is the first fiction feature produced in the Kusaai language. The entire cast is of nonactors, mostly from the village of Nakon. Ghanaian filmmakers play key roles in all aspects of the production. The cast and crew stayed within the village for the entire time of the 4 month shoot, sleeping in a two-room schoolhouse and sharing beds with mosquito nets. This was a full immersion experience!

The film inches toward the protagonists' crucial decision; should he stay in the village as its leader or return to the university to continue his education. Perhaps he has already gained a more vital one by coming back home.


Posted by Dwight the Connoisseur at 1:33 PM