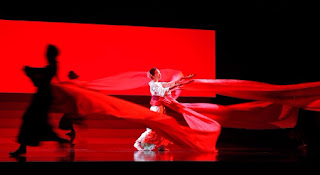 The late filmmaker Anthony Minghella's production of Puccini's Madama Butterfly got an appropriately sweeping treatment from Live HD Director Gary Halvorson and the producers of the Met Live HD performance series, seen on movie screens around the world this past Saturday. Wednesday, April 6 at 6:30pm local time  brings an Encore Presentation of this sterling production to select theaters. Check local listings for locations near you.

Having seen this production both live at the Metropolitan Opera House in New York and on the big screen Live in HD, its remarkable how vivid Minghella's vision becomes in the hands of a master Tv director and his multi-camera crew. Its as if Minghella envisioned his production as playing out on the big screen, with the subtleties of lighting, costume, props and accents of Japanese traditional puppetry theatre and other ancient theatrical elements and dance, all interwoven in a seamless production. Add to that the superlative voices and dramatic capabilities of soprano Kristine Opolais as the central character Cio-Cio-San (Butterfly) and the heroic tenor Roberto Alagna as her Pinkerton, and you have a production that is one for the books.

Met soprano and HD Host Deborah Voigt lent her illuminating questions in backstage interviews at intermission, which highlighted the importance of the puppetry which represented Cio-Cio-San and Pinkerton's love child and the wedding scene between the two principals as ably performed by the movement experts of Blind Summit Theatre, one of whom also turned in a brilliant solo performance in the puppetry scene reenacting the "wedding" of Pinkerton and Butterfly.

Visually, the production is stunning. Parts of the story are told through dance and [puppetry sequences emphasized by costume effects, such as broad red sashes representing the blood Butterfly will shed in her ritual suicide and the paper lanterns and sliding sheer panels framing Pinkerton and Cio-Cio-San's foundation-less love nest and the likewise shaky foundation of their union. With the able conducting of conductor Karel Mark Chichon in the pit with the Metropolitan Opera Orchestra, the production built in suspense to its ultimate climax, which was spine-tingling. Even if you've already seen last weekend's Live HD transmission, this landmark recreation deserves a second look. For details, visit www.metopera.org or fathomevents. com. 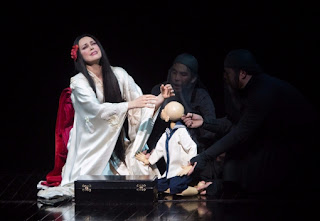 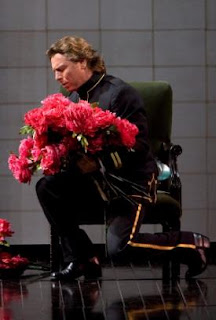 Posted by Dwight the Connoisseur at 4:33 PM