BROADWAY IN CHICAGO ESCAPE TO MARGARITAVILLE THE PERFECT WINTER GETAWAY THROUGH DEC. 2 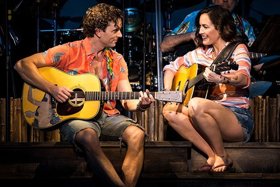 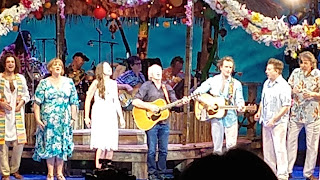 Broadway In Chicago's Escape to Margaritaville, at the Oriental Theatre now  through Dec. 2, is exactly as the title implies, the perfect escape from Chicago's infamous "Hawk" and the winter chill and all of the holiday shopping madness of State Street and the Magnificent Mile. Based on the beloved slacker-inspired song classics of Jimmy Buffet, who made a surprise appearance to reprise the musical's title song during the curtain calls, its a lighter than froth on a Ramos Fizz musical comedy tropical retrreat.
Set in a mythical,  tropical paradise with a dormant volcano, the musical brings together a Gilligan's Island grouping of misfits and world-weary escapees from society's humdrum in search of  their inner drunk. With cartoonish sets and a likeable roster of life-sized cutout characters and a breezy score dominated by Buffet's beloved classics (the titled Wastin' Away in Margaitaville, Come Monday, Cheeseburger in Paradise, Volcano, and more), the evening goes down easy like a well-crafted umbrella drink at  the swamp bar.
In spite of the breezy, purely here-to-entertain nature of the show, there are some sterling performances. Don Sparks (Broadway's Take Me Out, La Jolla Playhouse) plays a whizzened version of Buffet's alter-ego as J.D. and Drama Desk nominee (Broadway's Bright Star) is in superb voice and flashy guitar-playing style as the younger version of the show's namesake inspiration.

With a songbook by Emmy winning Greg Garcia (My Name is Earl, Raising Hope, and Emmy nominee Mike O'Malley (Survivor's Remorse, Shameless) and  Rockettes-kicking choreography by Tony nominee Kelly Devine (Come From Away, Rock of Ages) and spot-on directing by Tony nominee and La Jolla Playhouse Artistic Director Christopher Ashley (Come From Away, Memphis),  this is the play to see to chase away those winter and Holiday blues.
Be in for some delightful surprises along the way, including a cadre of high stepping zombie insurance salesmen who transform into the aforementioned glitter suited Rockettes clones and an Act One finale that rocks the house--literally, and the most original use for beach towels yet imagined. Amidst amidst a rainstorm of tropical Beach balls, Jimmy Buffet himself made a surprise appearance onstage with the cast, the make an appeal for hurricane relief and to lead a singalong of the  title song. The audience danced out of the door oblivious to the falling temperatures outside. Now though Dec. 2. Visit BroadwayInChicago.com for tickets and information.

Posted by Dwight the Connoisseur at 2:19 PM