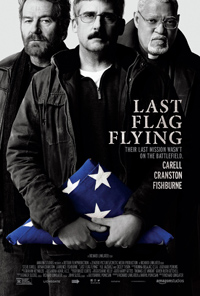 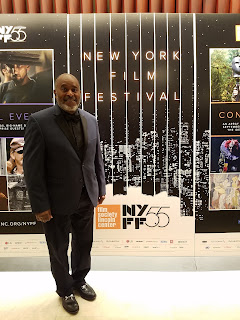 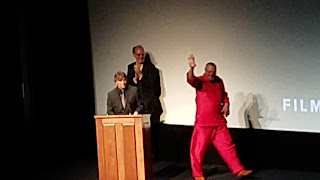 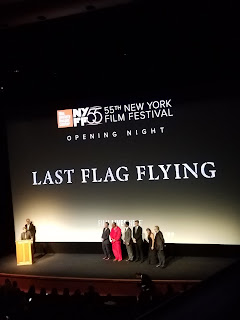 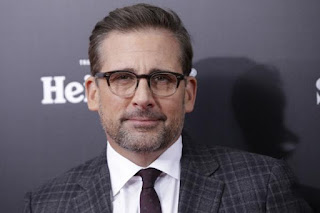 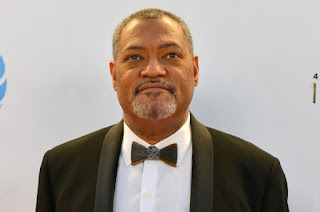 The New York Film Festival opened with Oscar nominated director Richard Linklater's latest searing drama Last Flag Flying starring the stellar talents of the ever-superb Steve Carrell as the film's central character Larry 'Doc' Shepherd, a former Navy doctor in the throes of grief after losing his only son in the Iraqi war. Already suffering the unhealed wound of his wife's death, Doc is an abyss of grief. He seeks out his old military buddies Sal, the cynical and unrepentant alcoholic Bryan Cranston and Richard 'The Mauler' Mueller (Laurence Fishburne) an ex-Marine bad mouth who has since reformed to become a self-righteous, color-wearing man of the cloth. Both the Fishburne and Cranston characters are sterling examples of the adage 'once a Marine, always a Marine.' Linklater and co-scriptwriter Darryl Poniscanb, who also wrote the book of the same title upon ewhich the film is based, do a terrific job of letting the characters speak for themselves, with an abundance of attitude and expletives in abundance. Doc is an endless black whole of grief who hijacks his old buddies into a seeminlgly wrong-heade scheme to give his son what he thinks is a proper send-off.  The book and the film are a sequel to Ponicsan's 1973 film The Last Detail, directed by Hal Ashby. Linnklater successfully injects the film with his own deft style of character development and story-telling using the characters own words and the interplay of their personalities to move the story along. Particularly telling is a scene in which the three spend a light-hearted mooment spining a dirty penis joke to its absurd limit. The scene is a window into the life of former combat buddies who no doubt passed some perilous times together, distracting their attention away from imminent danger with mindless humor.

Part buddie film, part road-trip movie, the film mixes in a heavy dose of humanity that will have you choking back tears at the end. Cecily Tyson makes an all-too-brief appearance as the mother of one of the men in their unit who didn't survive. The facts reveal that the circumstances of his death were less than heroic, and Cranston leads the charge to unveil the truth. Confronted with the still grieving mother,  the three decide to swallow their pride and allow the grieving mother to cling to her glorious fantasy.

Last Flag Flying is a protest film of sorts against war, but it doesn't hit you over the head with it. Instead, it allows the flawed humanity in the characters and that desire to do at least one thing right in the sea of mistakes we humans all make, to shine through. With all their faults, Linklater's characters just dry out for love and we, the audience, willingly give it to them.

Posted by Dwight the Connoisseur at 12:28 PM