Stella Abreara in the title role 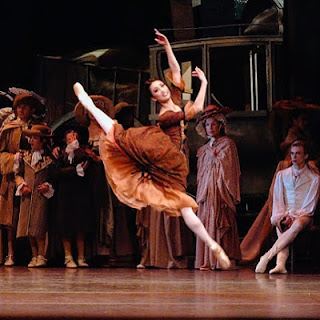 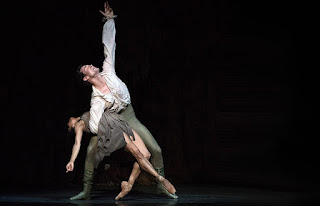 American Ballet Theatre ABT ended its Spring Season at New York's Metropolitan Opera House with ballet productions that epitomized its standing as  the nation's preeminent ballet company. Those who saw Manon and Swan Lake, were treated to a ravishing display of classic ballet at its pinnacle. Sleeping Beauty was the season finale.

Sir Kenneth MacMillan's Manon, which received its World Premiere at The Royal Ballet in 1974, was presented with all of its dramatic import and scenic glory intact. Adapted from the 1731 novel of the same name my Abbe Prevost , the story of the rise and fall of a woman born into poverty working her way through the misogynistic ethos of the era to fleeting wealth only to fall victim to its imbeded traps, is the ultimate tragic tale.

In Manon's world, she is bartered like a piece of chattel by her greedy brother, Lescaut to be passed between the hands of the older gentleman she is traveling with and the wealthy Monsieur GM. When she arrives in Paris in the courtyard of the inn where her brother and GM await, she meets the handsome young student Des Grieux among the glamorous habitués and demimonde of Paris, and instantly falls in love.

The opera's score is a pastiche of music gleaned from more than a dozen of Massenet's operas, orchestral divertissements and piano works (one recognizes themes from Thais, Don Quixote, Le Cid, Cleopatre, Cendrillon, among others). The themes are beautifully spun out like gilded threads by members of the Company Orchestra. Principal Conductor Charles Barker imbued the score with an air of depth and clarity.

Manon is one of the most enduring tragic stories in all art. It is a tome that has found its way into the pages of literature, to the opera stage, and then to the ballet.  It follows the path of a fallen heroine, a theme which lies at the heart of so many great operatic tragedies. In fact, when MacMillan first proposed his new ballet to his principal dancers at The Royal Ballet, he presented them with a double volume that included a novella of that most eponymous of all tragic heroines, Carmen.

Those who saw several productions of Manon during its run at the MET were treated to a cornucopia of superlative performances from ABT's principal dancers, who brought differing levels of dramatic tension and choreographic nuance to the characters and the ballet's expertly staged scenes. It is hard to believe that all of the principals were appearing in their role debuts, as their performances were so in sync with their partners.

When we first meet Manon she is on her way to a convent,  Boylston's
gossamer moves aptly reflected her innocence. Her transformation from ingenue to operator to oppressed victim was seamless and convincing.

Things heated up quickly in Act I.  Once  Manon spied De Grieux they instantly fell in love. The ballet and the performances by Boylston and Hallberg  then moved into high gear.

The party scene which opened ACT II was a masterpiece of stagecraft. The costumes and scenery were a glory to behold. Lighting by Thomas R. Skelton underscored the gaiety of the moment and portend the gravitas to follow.

With Massenet's glorious themes swelling from the orchestra pit, the ballet soared to  theatrical and balletic heights.

The party scene was  where the principals and soloists began to shine. The pas de deux between Manon and Des Grieux was danced by Boylston and Hallberg to the apex of seduction. Sir MacMillan's ingenious choreography was expertly danced by the pair.

Ultimately, it was Manon's journey that served as the dramatic arc of the ballet. Artful dancing and exceptional staging made for an indelible experience.

There's plenty of 'storm und drang' in this ballet, complete with stabbings, murders and passion to spare.

Staged by the team of  Julie Lincoln and Robert Tewsley, the Scenery and Costumes by Nicholas Georgiadis, as  recreated by ABT, brilliantly depicted the  razor-thin delineation between great opulence and absolute degradation. Manon's fall from grace as a bejeweled courtesan and the object of Des Gireux's ardor, to her subsequent arrest as a disgraced woman charged with prostitution and her banishment to the wilds of the Louisiana Territory are portrayed with stunning clarity.

Manon's story is the ultimate dramatic tragedy. It inspired not only Sir Kenneth MacMillan's ballet, but two  grand operas; Jules Massenet's Manon and Giacomo Puccini's Manon Lescaut. As one who has seen both opera versions numerous times, it was refreshing to see it transposed to the balletic stage. ABT's presentation of this classic once again proved the enduring power of dance. 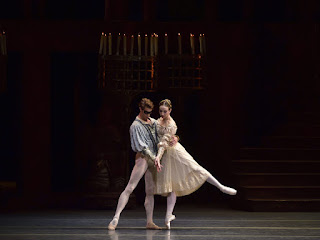 Posted by Dwight the Connoisseur at 11:49 AM