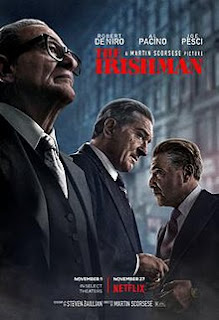 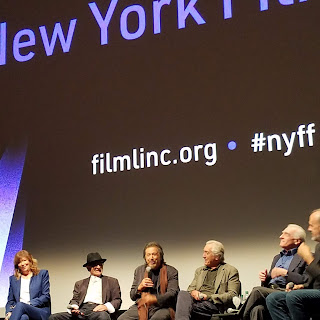 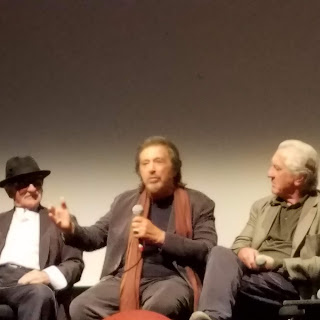 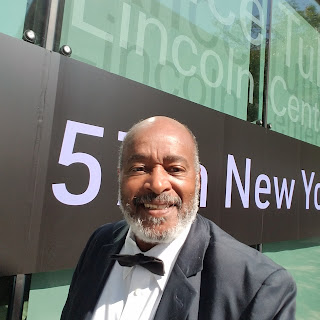 More than 300 scenes, 108 days of shooting, 117 locations, and a decade of planning culminated in the multiple Oscar-worthy masterpiece,  Martin Scorsese's  The Irishman, in theaters in limited release Nov.1st  then streaming on Netflix beginning Nov. 27.

Produced by Scorsese with Jane Rosenthal and Robert De Niro and their TriBeCa productions, among others, this is a film that should not be missed. It is particularly so  in light of events that are now unfolding in our nation's capitol. The Irishman speaks to the moral dilemma of our time. Clocking in at just under three and a half hours, the film's content is so absorbing that the time is of no matter.  With a production budget of $159 million, it is one of the most expensive films of  Scorsese's career. Cost and running time notwithstanding, this is a film that commands your full attention throughout.

The Irishman is a 2019 American epic crime film produced and directed by Martin Scorsese and written by Steven Zaillian.  Based on the 2004 memoir I Heard You Paint Houses by Charles Brandt, it purports to trace the life of the man responsible for the murder and disappearance of Teamster Union boss Jimmy Hoffa. The film traces his simultaneous rise through the ranks of the union and the mob to become Hoffa's right hand man and confidant. As he is handed the coveted ring, marking him as the highest rank of "made" men ("there are only three of these," he is told by the Joe Pesci character, crime boss Russell Bufalino,  "you are the only Irishmen to get one of these." Hence, the film's title). But, with that honor, comes a heavy price.

"This movie is not so much about the actual events, " Scorsese told a news conference after the films World Premiere screening at the 57th New York Film Festival, "but about what happens to us emotionally within. Yes, we know its all going to happen, no matter what, as the Pesci character points out, but how it weighs on us, and the regret it fosters. This is paramount throughout the film."

Digital effects by Industrial Light and Magic and visual effects supervisor Robert Legato along with a posture coach allowed the characters to age and de-age as the film's narrative time-shifts.  "I was playing Jimmy Hoffa at the age of 39," Pacino told the critics assembled at Lincoln Center's Alice Tully Hall for a  pre-festival screening.  "They're doing that on a computer. We went through all these tests and things (recreating a scene from Scorsese's earlier film Goodfellas) You're 39, some sort of memory of 39, and your body tries to acclimate to that." The result upon  viewing  the film is seamless. The special effects alone are worthy of an Oscar nod for their aesthetic achievement.

The all-star cast is punctuated in a bravura performance by  Al Pacino as embattled union leader Jimmy Hoffa. I have memories of Hoffa's appearances at Union rallies in Chicago,  where attendance was mandatory for two of my relatives, who were both union members and organizers. His fiery rhetoric and bombastic delivery were his signature and Pacino captures it perfectly in this film. Hoffa pulled no punches in his speeches and his troops were merciless in enforcing his iron will, which was his eventual downfall. (One  particularly vivid memory is that of a union 'scab' being shot as he attempted to pull his Mack truck out of a neighboring driveway in the pre-dawn hours during a Teamsters' strike. My father immediately darkened the house so that no one could see that we had witnessed the travesty).

"There was a lot of film and old TV footage of Hoffa that I could draw from," Pacino told the news gathering.  Scorsese chimed in, "You could also see Al walking around the set with an earpiece in his ear the whole time, listening to audio of Hoffa's speeches!" Joe Pesci as crime boss Russell Bufalino gives another tightly wound performance. The superb front-line cast is rounded out with Harvey Keitel as Angelo Bruno and a surprisingly scintillating performance by Ray Romano as the crime family's 'consiglieri'  Bill Bufalino.

The film is pure genius and a virtual primer on what good filmmaking is all about. It should win many Oscars.

Posted by Dwight the Connoisseur at 8:28 AM