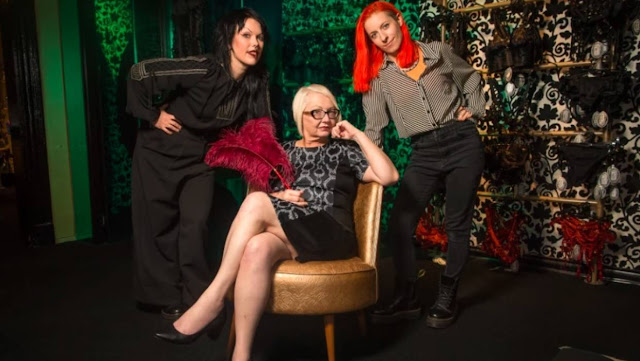 A first-time feature by directors and writers Isabel Peppard and Josie Hess, Morgana dazzles in its revelatory bliss, even as it pushes the limits of common wisdom and propriety. The film, which premiered at the 2019 Melbourne Film Festival, has won awards at festivals from Sydney to San Francisco.

Morgana Muses (yes, that is her real name) spent 20 years in a loveless, sexless marriage. Divorcing after years of misery, she made the desperate decision to hire a male escort to have one last fling before committing suicide. Rather than reinforcing her sense of hopelessness, the encounter instead led her to believe that there was something better in store. She felt liberated, and began exploring a part of herself that had been buried beneath layers of self-loathing and emotional repression.

Inspired by her late father’s wanderlust (“My father had a choice; move to Argentina or Australia. He flipped a coin and went to Australia.”) So, she struck out for Berlin, the historic epicenter of free sexual expression. “Why go to therapy,” she mused (pardon the pun), when I can go to Berlin and be weird.”

In Morgana, the Cinematography by Hess and Peppard is arresting. A series of Miniature set pieces designed and built by Peppard and filmed by Gerald Thompson are a stroke of genius. The punk-influenced score by Jordan Gilmour accentuates the high wire daring of Morgana’s imaginings.

Morgana faces her demons head on and wrestles them, literally, to the ground with her artful films. There are dazzling images that strokes of pure cinematic genius throughout the film. Her images probe deep beneath layers of emotional suppression and erupt a subterranean volcano of sensuality.

Posted by Dwight the Connoisseur at 7:38 AM