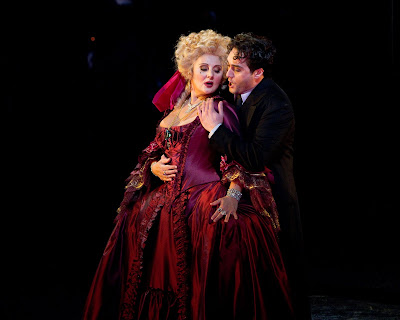 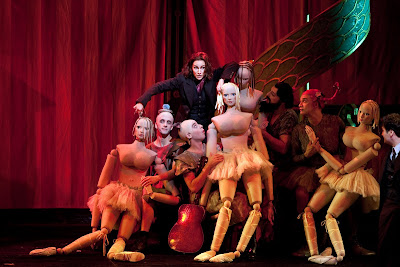 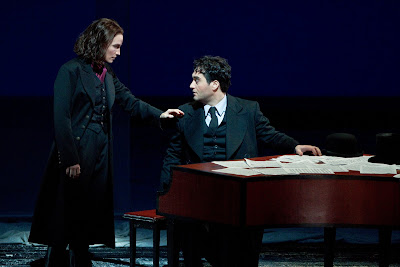 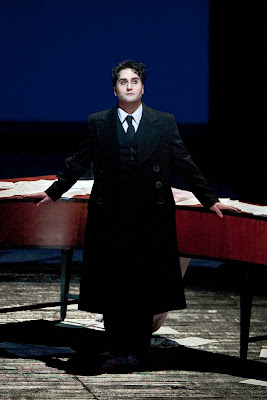 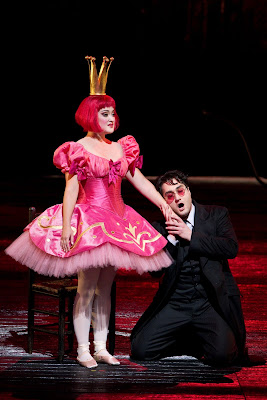 New York—After a stupendous Opening Night Gala performance of a new production of Richard Wagner’s Das Rheingold, the Metropolitan Opera forged into the second night of its opening week for the 2010-11 season with a scintillating production of Jacque Offenbach’s Les Contes d’Hoffmann (The Tales of Hoffmann). This is the Met’s 250th performance of this masterpiece.

Originally premiered in Paris in 1881, the work is modern in every way, with a challenging score and an equally demanding story line. It also features daring music that at once showcases and tortures its singers and musicians. The opera is presented in French with English titles that, at the Met, are located within a tiny screen on the back of the seat in front of you.

There are scenes in the opera that are absolutely sublime. Yet there are times when the story descends into crude reality, contrasting laugh-out-loud humor with parts that are just downright weird. The opera can be confusing to those who aren’t familiar with it because much of what we see on stage are events that unfold in Hoffmann’s mind. His identity splinters into several characters; some good, some evil. None are benign. Events play out both in the real time of the present and in the reflected memory of the past. Somehow it all comes together seamlessly in the skilled hands of Tony Award-winning Director Bartlett Sher and Conductor Patrick Fournillier in his Metropolitan Opera debut.

The top-flight cast left nothing to be desired. Singers scaled the heights of Offenbach’s loftily ambitious score. Even those that occasional stumbled on an errant loose rock or slippery slope along the way managed to reach the pinnacle of performance. Each performed at their personal best. Tenor Giuseppe Filianoti, who will also play the Duke the following night in the Met’s Rigoletto, proved to be a superlative tenor, capable of making Offenbach’s fiendishly difficult passages sound as if they were written expressly for his vocal range.

Russian soprano Hibla Gerzmava, is in her Met debut as Antonia.

After a stunning entrance in the opening aria of Act II, “Elle fui, la tourterelle,” which is set against an ethereal backdrop, her voice became a bit fragile in the upper register as she strained to reach some of the higher notes.

Albanian Mezzo-soprano Enkelejda Shkosa as Giulietta absolutely nailed a series of difficult trills in the love duet of Act III, “O Dieu! De quelle ivresse.” Paired with Filianoti’s creamy tenor, theirs was the type of performance that opera patrons pay the big bucks to see.

Earlier in the opera, soprano Anna Christy knocked it out of the park in her acrobatic singing role as Olympia, the robotic doll who is Hoffman’s first love interest. Mezzo soprano Kate Lindsey turned in an overall satisfying vocal performance in dual roles as Hoffman’s ‘ace boon ’ Nicklausse and The Muse.

The two male cast members, Bass Idler Abdrazakov as the Four Villains and tenor Joel Sorensen as the Four Servants, got a real workout in their multiple roles, but proved more than equal to the tasks. The costumes were an achievement worthy of an award and stood out as lead performers themselves as did the imaginative set design.

Dance and movement are as much a part of Hoffmann as the music and the choreographic team deserves as much applause and ovation as the performers. As always, Chorus Master Donald Palumbo did a brilliant job.

The sight of scantily clad bods on the Met stage has become almost old hat, so the oh-so-many boobs in pasties during the Act III party scene barely raised an eyebrow. The orchestra and chorus nicely performed the familiar lilting theme, “Amis, l’amour tendre et reveur,” with its cautionary lyric mocking the pleasures of the flesh.

Sadly, Les Contes d’Hoffmann turned out to be Offenbach’s swan song. He died before he had even completed the manuscript. One gets the feeling, however, that the composer poured everything he had into this wide-ranging work, even investing his own psyche into the tortured creative soul of his protagonist.

From an historical standpoint, Hoffmann is Offenbach’s last will and testament. In crafting what would become the final work of his career, Offenbach had hoped to reinvent himself as a serious composer by departing from his norm of lyrical theatre. Where his earlier works may have been light and satirical, Hoffmann was dark and sardonic. In many ways, it reflected the burgeoning modernity of his time.

Les Contes d’Hoffmann is not for the feint of heart or those with a short attention span. Characters emerge and disappear only to resurrect themselves in entirely different guises. The music, too, is dense, with melodies and orchestrations shifting in timbre and mood, starting with child-like nursery rhymes that descend into a disturbing miasma of contrasting tonal colors and asymmetrical rhythms. It’s a long sit, but the reward is the opportunity to witness a thoroughly engrossing evening of opera. A number of less-hardy souls left after the first act. What a pity. I found myself happy that I had stayed and wanting more.

Posted by Dwight the Connoisseur at 9:54 AM