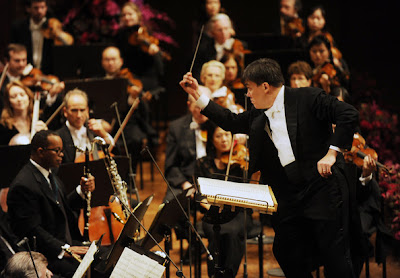 New York-New York Philharmonic Music Director Alan Gilbert opened his second season with a program that showcased the strengths of his orchestra and provided the framework for a virtuoso performance by one the music world’s most enduring and beloved soloists.

Itzhak Perlman played Felix Mendelssohn’s Concerto in E minor for Violin and Orchestra with Perlman providing the delicious treat of playing the original cadenzas, written by Mendelssohn and adapted by violinist Ferdinand David, for whom the piece was originally written.

The program opened with a sparkling rendition of Richard Strauss’ landmark tone poem, Don Juan. From the bracing opening bars, Gilbert was in full command. The urgent tempo was tempered by Gilbert’s skilled control; pulling back at just the right moment to allow the solo bars of the first violin to sing forth with uncommon sweetness. What followed was a lush flowing of romantic lyricism in which one theme seemed to melt into the next. Woodwinds sighed as French horns punctuated the transition from opening theme to crescendo then on to the ensuing recapitulation.

I recently saw a presentation of this work under the baton of Michael Tilson Thomas with his New World Symphony in Miami, in which scenes from the 1948 Errol Flynn movie, The Adventures of Don Juan, played on a screen at the back of the stage while the orchestra performed. It was interesting to note how perfectly the music dovetailed with the action on screen although neither had been written with that intent. How prescient of Mendelssohn to visualize the dramatic import of his music.

Itzhak Perlman is a force of nature on the concert stage. His boundless energy and impeccable technique make for a formidable combination that not only captures the ear but brings insight to the music. His playing is like watching a fireworks display on the Fourth. Although I have heard the Mendelssohn Violin Concerto many times, I have never heard it quite like this. It was played with an urgency that made it seem that it had been written expressly for Perlman that very day with the ink still drying on the manuscript pages. In his playing of the difficult triple stops near the end of the cadenzas, he went beyond blazing technique to cut to the soul of the music, thus elevating the listening experience. This was music-making at its best!

Gilbert rounded out the program with the works of two modern composers who each, in their own way, reflected the same innovative spirit of Strauss while incorporating groundbreaking musical ideas of the past; Henri Dutilleux’s Metaboles, composed in the early 1960s and Paul Hindemith’s Symphonic Metamorphosis of Themes of Carl Maria von Weber composed during the early 1940s.

First of all, let me admit that I absolutely LOVE the music of Carl Maria von Weber. Of all of the great composers, he is the most neglected on the current concert stage. It still puzzles me how a composer with such fluid expression and cohesiveness of ideas could escape under the radar of music lovers today. The fact that one of the most influential composers of the 20th Century chose to create an homage to his body of work should tell you all you need to know about this early creative genius.

This was the piece in which Gilbert & Company truly sparkled.
His interpretation bristled with energy. The various sections, woodwinds, horns, percussion and the occasional sweeping glissando of the harp created a vortex that propelled the piece to its thoughtful conclusion. The use of little heard percussion instruments, such as tenor drum, tam-tam, tubular bells and wood block added to the dimension and texture of the work.

Alan Gilbert is showing his propensity for the daring that challenges listeners to go beyond their preconceived notions of what constitutes Classical music. It is a music that knows no boundaries and is only limited by the amount of exposure audiences have to it. I am certain that over the course of his second season, Gilbert will rectify that problem.

Posted by Dwight the Connoisseur at 1:30 PM