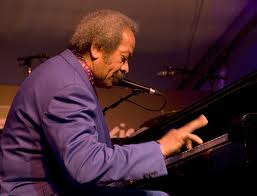 Allen Toussaint's Symphony Center Presents Jazz Series concert: The Bright Mississippi ,was a stellar opportunity to hear the music that has shaped and directed the course of American music over the last century in its most complete and unadulterated form.

Toussaint's name may not be household, but in his 40-plus year career as a writer, arranger ,performer and producer, he has influenced the career of virtually all of the greats we know today, from Paul McCartney to Etta James. If you look at the liner notes of many of the "albums," as Toussaint quaintly refers to them, his name is bound to crop up somewhere as a player, arranger or composer and sometimes, all three.

From the opening moments, when he strode to the Steinway amidst the audience singing a chorus of "Happy Birthday" in honor of his 72nd, it became apparent that he is truly a master of not only New Orleans Jazz, but R&B, Swing, Downhome Blues and all of its musical tributaries.

Accompanied by an able and energetic rhythm trio of Bill Solley, guitar, Roland Guerin, bass and Herman Lebeaux on drums, he explored both the melodic and rhythmic byways of this seminal Bechet tune. The song was first recorded in the dawning days of the Be Bop jazz movement and the twilight of the Swing Era. Toussaint’s deft handling of the melody and improvisation payed tribute to its bi-musical routes while lending it his own personal twist. After the opening riffs of thundering bass runs in his left hand and ever-increasing rapid arpeggios and glissandos in his right, it was apparent that he really didn't need their help to deliver a sound that would fill the cavernous space around the Armour Stage. Having just heard the full Chicago Symphony Orchestra in a concert of Ravel, Korngold and Tchaikovsky that afternoon, it was a marvel to witness how a small ensemble could create such an all-encompassing musical experience. Soloists Don Byron on clarinet and tenor sax and Toussaint’s mercurial fe New Orleans compatriot Nicholas Payton on trumpet, rounded out the evening with their virtuosic excellence.

Toussaint's playing echoes that of the guiding lights of soul, funk and jazz of the last century. His playing bears the fingerprints of Ray Charles, Art Tatum, Earl *Fatha" Hines, Fats Waller and that most graceful of pianist, Bud Powell. In his percussive approach, he at approximates the soulful genius of Horace Silver and the funk/jazz exclamations of Bobby Timmons. That same propensity cross pollinated with the raw genius of such white artists as Diz/Miles alum Mose Allison and pianist/composer Joe Zawinul, who elevated the Cannonball and Nat Adderly aggregation to international fame with his signature "Mercy,Mercy, Mercy!

Toussaint unapologetically populated his concert with selections from his new CD, "Bright Mississippi."

"I still call them 'Albums,' he said, with a hint of nostalgia in his voice. "I guess I'm just old fashioned."

There was nothing 'old fashioned' about his music or the playing of his stellar soloists. Don Byron resurrected the spirit of New Orleans' legendary clarinet genius Sidney Bechet, who Toussaint said "came from my neighborhood in New Orleans." Byron later rhapsodized the Ellington/Strayhorn chestnut "Day Dream" with a seductive tenor saxophone solo.

The soul ballad "Rule of My Heart," popularized by New Orleans vocalists Erma Thomas and Nora Jones and later turned into "Pain In My Heart" by Otis Redding, provided the bridge to more soulful territory, culminating in Toussaint's "Get Out My Life Woman," a rousing, defiant soul anthem.

This was truly a night and a concert that made you feel glad to be alive and able to hear such magnificent music. Upcoming Jazz series concerts include Wynton Marsalis and the Jazz at Lincoln Center Orchestra Friday, February 4. For information, visit cso.org.

Posted by Dwight the Connoisseur at 2:53 PM