Met Live in HD: Nixon in China a landmark event 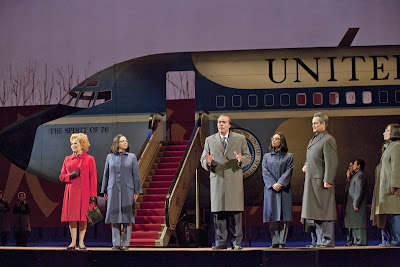 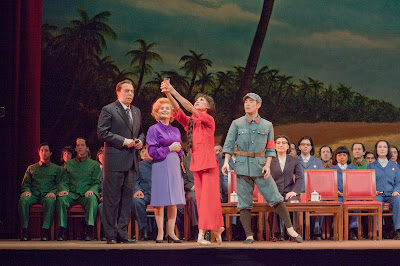 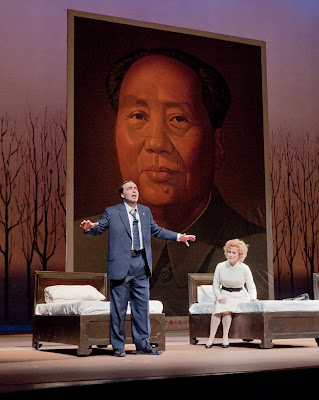 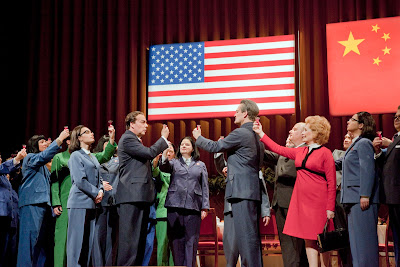 New York—Select movie theatres around the world are participating in a monumental and historic event, the Metropolitan Opera’s Live in HD transmission of John Adam’s opera, Nixon in China. The live performance will be transmitted from the Metropolitan Opera stage at Noon-Central Time, 1pm Eastern on Saturday, February 12. The approximate running time is 4 hours. If you were wondering what to do for Valentine’s weekend for that special person in your life, tickets to see Nixon In China would make an excellent choice. Tickets and information are available online at www.metopera.org or visit Fathom Events at www.fathomevents.com.

The live transmission of Nixon in China is significant for several reasons. Its creator, Pulitzer Prize (On The Transmigration of Souls-2003) and multiple Grammy-winner (including Nixon in China-1989)-winning composer John Adams, will also direct the production for the first time. In addition, it is the result of his close collaboration with famed American director Peter Sellars, whose writing and director for opera have won him the coveted Dorothy and Lillian Gish Prize, one of the richest prizes for the arts, in 2005. Sellars also directed and wrote the libretto for Adam’s other famous opera, Dr. Atomic, about Robert Oppenheimer and the development of the Atomic Bomb, the contemporary masterpiece which had its Metropolitan opera premiere during the 2008-2009 Met Live in HD season .

Nixon in China premiered in 1987. The opera is based on events that occurred nearly 40 years ago, when then-President Richard Nixon opened China to the western world. China is now poised to become the dominant world power of the 21st century. This “meditation on history and cultural difference,” as the Wall Street Journal called the opera, is an opportunity to examine a momentous event n American history through the unique medium of opera. Directed by famed American director Peter Sellars, the production promises to be “musically exhilarating and theatrically dazzling,” as critiqued by the New York Times. Baritone James Maddalena, who originated the lead role of Nixon in the original 1987 Houston Grand Opera production, will once again sing the title role. Janis Kelly sings the role of Pat Nixon, Robert Brubaker is Mao Tse-tung and Richard Paul Fink is Henry Kissinger.

In a recent backstage interview during the Met’s recent Live in HD transmission of Puccini’s Girl of the Golden West, Adams and Sellars talked about the upcoming production with backstage interviewer Patricia Racette. “If there’s anyone to “blame” for this production,” Sellars jokingly said of his long-time association with good friend and collaborator John Adams, “it’s me. I was inspired to ask John to write an opera about Nixon’s trip to China in 1972 not because of the event itself, but because of its larger meaning. In a way, the meeting of Nixon and Mao was the highest form of theatre and therefore an excellent starting point for grand opera. Here you have these exact polar opposites, Nixon, the pragmatic, almost colorless man who is the leader of the most powerful nation in the world and a staunch, almost Puritanical, conservative facing his ideological enemy, who, underneath his cold, passionless demeanor, was a fiery revolutionary who had the power to impress his ideological imprint on millions of people and hammer them into a lock-step of ideology through the People’s Revolutionary Army. You really see this in the ballet of the second act, “The Red Detachment of Women.” Mark Morris’s brilliant choreography features this absurd image of the dancers all on point dressed in the identical uniforms of the People’s Revolutionary Army which brandishing rifles. It’s a really telling and powerful scene.”

Adams admits that, at first, he wasn’t exactly floored with the idea of writing an opera about Nixon’s journey behind the Great Wall. “When I first met Peter in the summer of 1983 in New Hampshire, Nixon had by then become the stuff of bad, late-night television comedy routines. I also had no personal love for the man. After all, he tried to send me to Vietnam. When the poet Alice Goodman agreed to write a verse libretto in couplets, the project suddenly took on new life. It became part epic, part satire and part political parody. It really became a wonderfully complex but serious examination of history, philosophy and gender issues through these extraordinary personalities. You had Nixon, Chairman Mao and Madam Mao, Chou En-lai, Henry Kissinger and, of course, Pat Nixon. When you look at that personality landscape, you start to think, how can you capture all of that in anything but Grand Opera?”

Why should people see Nixon in China-opera fan or not? Adams sums it up best. “First of all, the music is wonderful and has a real crossover appeal, with a preponderance of rhythm, jazz and bass lines that at times almost rock. There’s a great mix of vocal types, from the baritone of Nixon [with James Maddelena reprising his title role of twenty-four years ago] to the heldentenor of Chairman Mao, and of course the ladies, with Pat Nixon as a lyric soprano and Madame Mao as a coloratura. It’s also intriguing to see characters that people have actually known in their lifetimes. “

The results of Adams’ two years of composing effort will be transmitted live from the stage of the Metropolitan Opera at Lincoln Center on Saturday, February 12 at Noon, Central, 1:00 pm ET, The Metropolitan Opera’s production of John Adams’s Nixon in China will be transmitted live to movie theaters worldwide as part of The Met: Live in HD series. There will also be an encore presentation on Wednesday, March 2 in the U.S., and Saturday, March 12 in Canada. For more information, visit www.metoperafamily.org.

Posted by Dwight the Connoisseur at 9:52 AM