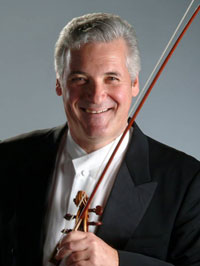 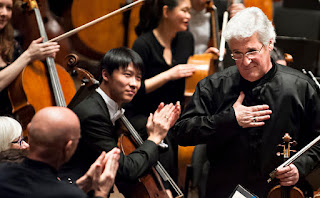 NEW YORK-The National Theatre of Great Britain may have recently ended their Lincoln Center Theatre run of the epic drama War Horse a few weeks ago, but another 'war horse' of symphonic proportions was being put through its paces across the plaza at Avery Fisher Hall, as violin virtuoso Pinchas  Zukerman and the esteemed German conductor Christoph Eschenbach as guests of the New York Philharmonic, led an inspired performance of the Bruch Violin Concerto No. 1 in G minor.  Zukerman's playing was both soulful and probative throughout as Maestro Eschenbach kept a tight reign on tempos and timbre to create a sympathetic and, at times, contrapuntal thematic base to Bruch's rich, Romantic themes and lush accompanying orchestrations. The spiritual beauty of the Adagio and the almost chamber music feel of the interplay between the woodwinds and cellos and soloist Zukerman were among the most sensually satisfying moments of this superlative performance. As this was the soloists 100th performance with the orchestra, the sympatico between he and the assemblage was evident. Huge swells from the brass and timpani punctuated by the synchronized pulsations of the bass section made the Finale: Allegro energico, quite thrilling.  Bruckner's Symphony No. 6 in A major, by contrast, was a somewhat solemn, measured piece of well-calibrated music, more intended to pierce the intellect than inspire the soul. Still, Eschenbach carefully mined its intricate depths like an agronomist searching for hints of jewels amongst the limestone. There were moments of brilliance and even joy in its carefully constructed measures.  The Langsam (slow) movement at the conclusion of a rather subdued Scherzo (moderately fast) movement, was perhaps the highlight of the piece, achieving a sort of equipoise under Eschenbach's skilled hand. He also managed to imbue the Finale with an air of suspense, building to an explosive crescendo that brought the audience to its feet with thunderous applause.

Posted by Dwight the Connoisseur at 7:31 PM