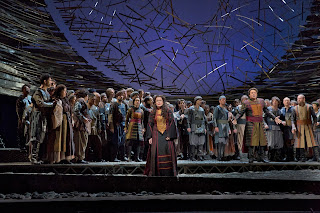 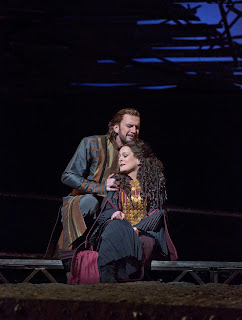 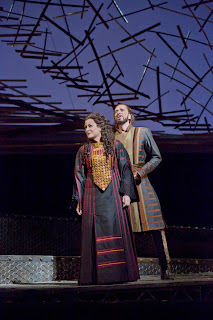 NEW YORK--A stellar all-American cast in a pull-out-all-the-stops production of Hector Berlioz's "Les Troyens" marked the Metropolitan Opera's observance of the composer's 200th birthday anniversary and the halfway mark of the Met's Live in HD season. With an encore performance set for Wednesday, January 23 and 6:30pm local time, this is a program that commands a second look.The next Met Live HD presentation is Saturday, January 19 at 12:55 pm ET, with Donizetti's Maria Stuarda (Mary Queen of Scotts) starring Joyce DiDonato, who also served as the backstage Met Live HD Host for Les Troyens.
Brilliantly staged by director Francesca Zambello, the production brought Berlioz' epic interpretation of Virgil's "Aeneid" into sharp focus through the exceptional camera work of Live in HD director Barbara Willie Sweete and her nimble multi-camera crew.  With a stellar chorus, directed by Donald Palumbo, performing seamlessly throughout in scenes punctuated by a captivating corps du ballet, choreographed by Doug Varone,the production was both visually stunning and emotionally riveting. The more than five and a half hour running time, with two half-hour intermissions included, seemed to fly by. The singers were so emotionally engaging that the audience was involved in the epic story at every turn. The marvelous singing and their emotive gestures brought their characters to life and made them so much more than historical representations, but real flesh and blood characters trapped in a crucible of betrayal, love triangles and power-lust. The story of "Les Troyens" is familiar to most, ecompassing the Fall of Troy at the hands of the Greeks, who, after ten years of seige, left behind a giant wood horse as a gift. The horse, of course, was a decoy. It was filled with armed soldiers who would lay waste to Troy once it was brought within the gates of the city.Deborah Voigt is the doomed Queen Cassanera, in her greatest role since that of Brunhilde in last year's Met production of the Ring cycle. The action in the second half of the opera moves to Carthage, North Africa, where Aeneas, sung forcefully by Bryan Hymel in his Metropolitan Opera debut, vows to fulfill his destiny as foretold by the gods to found a new empire (Roman) in Italy. Dido, sung dramatically by soprano Susan Graham, at the end, foretells the doom of the Roman Empire at the hands of a fellow member of African nobility, Hannibal. The sets, designed by Maria Bjernson, emphasize the sense of impending doom with a giant surrealistic globe hovering over the expansive wasted futuristic landscape of a set. The electrifying costumes by James F. Ingalls heightened the sense of other-worldly oppulence. Met Maestro Fabio Luisi led the orchestra with a firm hand, emphasizing the panoramic grandeur of the opening acts and the more intimate drama of the final scene with equal skill. Choreography by Doug Varone gave particular elegance to the lengthy ballet scenes. It will all be repeated in an Encore Presentation Wednesday, January 23 at 6:30pm local time. Check local listings for theatre locations. "Les Troyens" is experience well worth repeating.

Posted by Dwight the Connoisseur at 12:03 AM