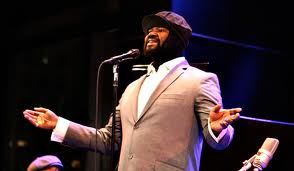 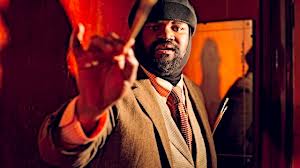 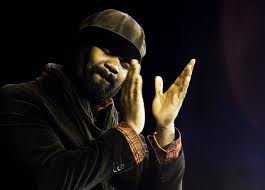 NEW YORK--Gregory Porter is right now the hottest vocal star in the jazz firmament. A singer/soong-writer, now with two current Grammy nominations under his belt for best R & B Vocal and Best Album, and recent appearances at the Nice and Monterey Jazz Festivals, and an upcoming appearance with Wynton Marsalis and theLincoln Center Jazz Orchestra in a performance's of Marsalis's Pulitzer Prize winning epic oratorio  on slavery, "Blood on the Fields" Porter's career has taken a meteoric arc, from a standing-start as a virtual  unknown to being on the cusp of a major international career. That fact was made quite evident at a recent post-midnight appearance at the Poisson Rouge, formerly the legendary Village Gate, as part of the New York Winter Jazz Festival, sponsored by local and internet jazz radio station WBGO (wbgo.org) and recorded for future broadcast on the station. Radio and festival venue host Gary Walker introduced Porter, tracing his humble beginnings as a house painter's son. "As a young boy, growing up in Brooklyn, he would stand under his father's ladder and let the drops of paint pour onto his head, so that his hair would have these streaks of color. He would run through the neighborhood like that so everyone could see that he was the 'house painter's son.' That touching bit of biography was the perfect segue into Porter's opening number "Colors" from his Grammy-nominated album, that inaugurated a 45-minute set before a steamy, sardine-packed, standing room  only audience. Porter's soulful voice (his mother was a church choir director, where he had his first singing experiences as a child) soared above the din of conversation and clinking glasses as he delivered his achingly personal lyrics depicting the panful loss of history and identity in Harlem (On The Way to Harlem) and biting social commentary and lamented loss of racial identity and violence against black youth (1960 What!) The performance was somewhat uneven at times, with some numbers languishing beneath the audience's preoccupation with idle murmurings, texting and cell phone photo flashing, but Porter quickly won them back with his soulful entreaties that brought a thunderous ovation and calls for "Encore!" I think he's got that Grammy-thing sewn up tight!
Posted by Dwight the Connoisseur at 8:58 PM