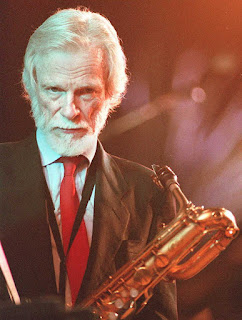 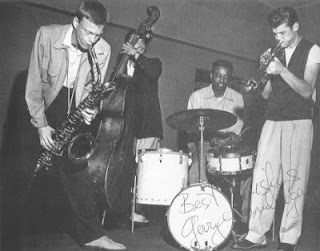 Gerry Mulligan and his 1940s-era Quartet 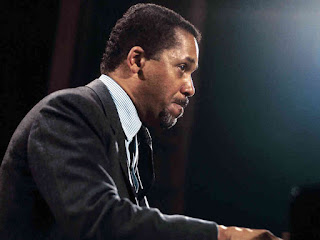 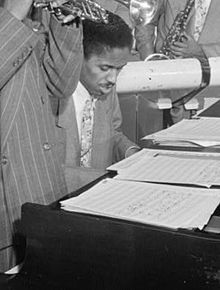 A 1940s-era John Lewis as band leader and arranger 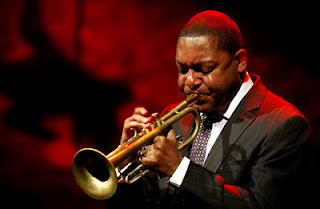 Wynton Marsalis belts out a solo at Jazz at Lincoln Center 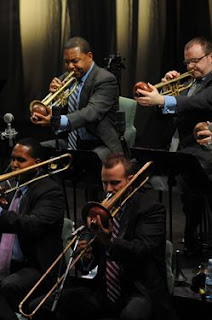 Jazz at Lincoln Center: The Music of Gerry Mulligan and John Lewis


Reviewed by Dwight Casimere January 18, 2013  at the Rose Theatre, Time Warner Center
NEW YORK--"How do we keep the magic?" was the question that Jazz at Lincoln Center music director Wynton Marsalis said the great pianist, composer and Modern Jazz Quartet founder John Lewis posed to him shortly before his death in 2001 as the two were discussing the future of the Jazz at Lincoln Center project. "John loved this music and spent the last years of his life thinking of ways to keep it alive," Marsalis told the capacity audience at the Rose Theatre before embarking on an expansive program of The Music of Gerry Mulligan & John Lewis with his Jazz at Lincoln Center Orchestra.
New Orleans-born piano prodigy Jonathan Batiste launched the musical proceedings with a flurry of improvisational glissandoes that echoed the sounds of Claude Debussy, Maurice Ravel and Chopin, John Lewis's earliest influences when he studied piano as a child growing up in Albequerque. New Mexcico, where he later received a Masters Degree with a double major in Anthropology and Music before making his way to New York, where he studied at the famed Manhattan School of Music, eventually making his way Evan's apartment and Miles Davis's nonet,where he crossed paths with baritone saxophonist Gerry Mulligan, who would become a lifelong friend and collaborator and co-conspirator in the 'Birth of the Cool.'
Mulligan's career followed a similarly sinuous path that would lead him to the same "Birth of the Cool' band led by Miles Davis, where he and Lewis met. In his formative years in Marion, Ohio, his mother hired a black nanny,named Lily Rose, who often cared for the young Mulligan in her home. He became fascinated with a player piano that contained various rolls, among them those by Fats Waller. Because of the racial discrimination of the time, which denied traveling black musicians equal accommodations at area hotels and motels, they would often stay at Rose's home, where the impressionable, young Mulligan developed an affinity toward their music.
Subsequent moves by the family would take him to Detroit and Chicago, where he developed early musical prowess as a reed player and arranger, even at the high school leel. Evenutally, he made his way to New York, where he wound up living with Gil Evans and then being hired by Davis in the 'Birth of the Cool' band.The rest, as they say,is history.
Marsalis's approach to the music was both reverential and enthusiastic, soloist Batistetaking the music by storm, especially in the finale to the John Lewis portion of the program. Both the Mulligan and Lewis families were in attendance at the concert and stood to acknowledge the thunderous applause of the audience. A nice  touch that affirmed the affinity between the two composers and arrangers. "Django", which Batiste pointed out, was inspired by the jazz/gypsy guitarist of 1940s 'Paris Blues' France, Django Reinhart, "not the Quentin Tarantino movie of the same name," he quipped, gave a chance for the orchestra to gently swing into Lewis' classically-inspired music. His "Piece for Piano Solo and Jazz Band" best exemplified Lewis's unique ability to blend classical forms with jazz themes. The tight structure of the evocative movements, entitled "Spaniush Steps" and "Piazza Navona," referenced the composers' travels and gave ample room for members of the Jazz at Lincoln Center Orchestra to stretch their improvisational muscles.
Soloists Victor Goines, on tenor, Chris Crenshaw on trombone, Sherman Irby on alto and Marsalis himself took enthusiastic turns at the mellifluous compositions of Gerry Mulligan, most notably the haunting "Lonesome Boulevard" and his jazzy "Walkin' Shoes."
The concert could well have extended beyond its two and a half hour length with the extensive program only barely scratching the surface of the musical gold mine left behind by Lewis and Mulligan. Although only a snapshot of their collective genius, the concert served to paint a loving and conscientious portrait of two of modern jazz's most enduring creators.
Posted by Dwight the Connoisseur at 6:35 AM