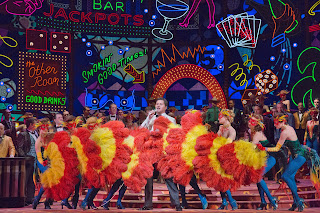 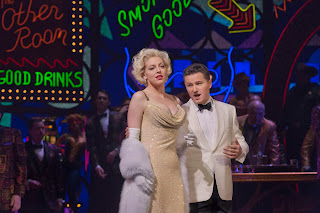 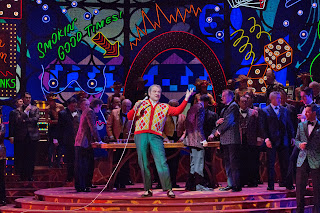 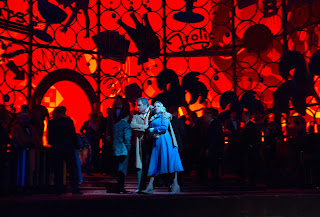 “There’s no place that embodies the deception, the licentiousness and the excess of Verdi’s Rigoletto like Las Vegas,” gushed Tony Award winning director Michael Mayer (for the Broadway musical “Spring Awakening” in 2007), in describing his current production of Verdi’s Rigoletto now running at the Metropolitan Opera in Lincoln Center, New York, through May 1 and seen by Met Live HD audiences around the world February 16, with a U.S. Encore performance Wednesday, March 6, 2013 at 6:30pm local time (check local theatre listings for screening locations.)

“I wanted to still give the opera an historical framework,” Mayer continued in his backstage interview, “so I set it in 1960s Vegas during the Rat Pack era.” With eye-popping neon sets by Christine Jones and joyously tacky sequined gowns and garishly colored tuxedo costumes by Susan Hilferty, Verdi’s original setting in 16th century Mantua is quickly swept aside as the action and the singing move into high gear.

Tenor Piotr Beczala sings the role of the Duke with the swagger and Devil-may-care abandon of a Frank Sinatra, winning over the rowdy crowd of debauchers at his grandiose casino.

Zeljko Lucic lends his silky, cigar smoke baritone to the title role of Rigoletto, now depicted as a bartender, a modern day version of the court jester envisioned in Verdi’s original. Lucic’s character has the winking sarcasm of comedians like Vegas’ Don Rickles, whose barbs amused the mobsters that populated the gambling dens, but kept them wondering in the back of their minds if he weren’t somehow ridiculing them at the same time.

The scene when Rigoletto sits alone in the casino, singing of his beloved daughter Gilda (sung beautifully by a stunning Diana Damrau) and his vain struggle to keep her away from the lurid influences of ‘The Strip.’ His voice takes on a hauntingly poignant quality.

The vivid performance took on a campy feel when the magnificent Russian bass Robert Pomakov appeared in a sheik’s getup as the conniving Count Monterone.

The Duke’s penthouse in Act II is one of the real triumphs of Met stagecraft. With the Duke’s men lounging around the opulent expanse with its green curtain backdrop and huge spiral staircase. The scene is quintessential Vegas and sets the stage for the conflict that will unfold between them and Rigoletto.
The opera gets an Encore presentation March 6 in theatres around the country. It deserves an up-front-and-personal look as well during its run at the Metropolitan Opera House through May 1. Visit metopera.org for ticket information.

The next Met Live HD presentation is Parsifal with the dynamic tenor Jonas Kaufmann starring in the title role in Francois Girard’s new vision for Wagner’s final masterpiece, Saturday, March 2, 2013 at 12pm ET. Visit fathomsevents.com or metopera.org for theatre locations and tickets.
Posted by Dwight the Connoisseur at 10:01 AM