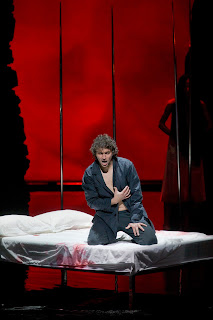 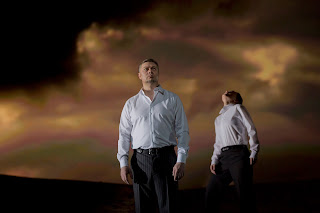 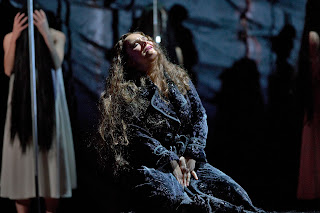 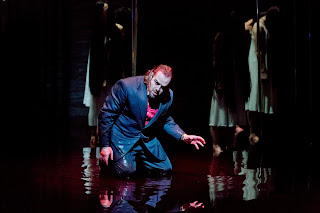 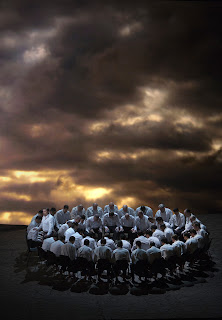 A scene from Act I
Act II below

Richard Wagner’s Parsifal, as depicted in the new Metropolitan Opera production, directed by acclaimed Academy Award winning (1998 The Red Violin, Academy Award for Best Original Score) director Francois Girard, is a dark and gloomy affair. For a moment, as I entered the darkened movie theatre in the Met Live in HD presentation, I thought I might have accidentally stumbled into the movie “The Last Exorcism: Part II”, which was playing in an adjoining theatre, but Rene Pape’s familiar stentorian bass voice assured me that I was in the right place.

Michael Levine’s chillingly stark set, depicting an almost treeless forest with a moon crater-like lake, and two barren berms ripped right out off the stage of Athol Fugard’s Boesman and Lena, turned out to be the perfect setting. It set the theme of personal redemption and salvation in bas-relief against the apocalyptic backdrop and served to heighten the emotional impact of Wagner’s last masterpiece.

“It’s a piece that stands on its own,” director Francoise Girard told Met Backstage Interviewer and star bass Eric Owen. “It’s in its own league. For five years, I spent working on it, I cam to realize that it is an experience that is far beyond the normal scheme of productions. It’s a very simple story of Spiritual Redemption and the question for all us involved was ‘how do we make this relevant and we actually decided to make it contemporary, so the torments and temptations are not about monks of the past, but they are relevant today. It’s our suffering. It’s our temptation; it’s our life that’s onstage.

“Wagner, in the last year’s of his life, tried to reconcile all of his influences both spiritually and musically in Parsifal. Artistically, it was such a testament to the body of his work. The piece is very long. It’s very dense. It makes references to not only Christianity, but to Buddhism, which we also tried to reference in out production. There’s so much in it that it took a Herculean effort to bring it to the stage. There are well over 200 artists working here today in order to bring Wagner’s vision into fruition. But we have a lot of big heavy shoulders to carry the weight of this responsibility.”

Eric Owens proved to be a masterful Backstage Host and Interviewer. His ease in addressing the camera, with his mellifluous basso profundo voice, and his command of the subject matter informed his questions and served to set his interview subjects at ease. All except for his boss, Met General Richard Gelb, who seemed to have just a bit of stage jitters as he answered Owens’s probing questions.  Listening to the difficult names of the mostly Russian and Swedish cast members literally roll off of his tongue was a special delight.

From the Overture to Act I, through to the final charismatic scene, more than five and a half hours later, Parsifal is a riveting experience.  Jonas Kaufmann sets just the right pitch as his central character balances on knifepoint between outright cruel criminal behavior and the possibility of repentance and personal salvation. His plight is not unlike that of today’s youth, ensnared in a web of urban violence, and the nation’s current debate over gun violence. Somehow, Wagner’s message is ricocheted from the 13th century sanctuary of the Knights of the Holy Grail to modern times by Thibault Vancraenenbroeck’s pitch-perfect costume design, David Finn’s dramatic lighting, which almost becomes another cast member, Peter Flaherty’s video design and Levine’s sparse, but symbol-laden sets.

Carolyn Choa’s choreography is a superb complement to the score throughout and serves to meld the singing of the chorus, as always masterfully prepared and conducted by Chorus Master Donald Palumbo, and the action onstage.

In the lair of Klingsor, in Act II, dancers and chorus become fused in a single effort that both propels the action and roots the story in its contrasting themes.

The singing is divine, as is the conducting by Maestro Daniele Gatti who, deservedly, received a thunderous ovation as he made his way to the podium for the final act.  Jonas Kaufmann is one of the great dramatic tenors of the opera stage, although I’d recommend that he hit the gym a time or two before doing the “buff” thing. But, perhaps that too is in character, given Parsifal’s exhaustive, Christ-like journey toward self-awareness.

“Par-si-fal”,” Katatrina Dalayman intones in the role of the ageless medium Kundry, “both pious and foolish.” This sets forth the emotional dichotomy of the character and his dilemma. The sights of Parsifal struggling over the mound in sackcloth, while holding high the holy spear is the emotional highpoint of the opera.


Wagner intended Parsifal as a type of Benediction, designed to consecrate the stage of his beloved creation, Bayreuth. Here, his mission is realized with not just reverence, but a distinctly modern verve that makes Parsifal relevant to the trials and tribulations of today. Parsifal will experience an Encore performance Wednesday March 20th at 6:30pm local time. Check local listings for theatre locations or visit www.metopera.org or fathomevents.com. It is not to be missed.

Posted by Dwight the Connoisseur at 11:38 AM