Lisa Batiashvili with the Staatskapelle Dresden at Carnegie Hall, simply the best

Composed in 1880 for the virtuoso Joseph Joachim, it is Brahms's only violin concerto and considered one of the most difficult of the violin repertory. Its lush themes and hushed introductions would have one think otherwise, but beneath it's seeming simplicity lies a complex maze orchestration. Batiashvili imbued Brahms's soaring melodies and intricately woven internal passages with a level of emotion that transcended its technical challenges to reveal a performance of exquisite beauty. She exemplified a level of emotion far beyond her 32 years in its most emotive passages, particularly in the Adagio movement and the poignant opening theme of the Allegro giocoso. She literally threw herself with abandon into the final bars of the joyous finale.

For his part, Christian Thielemann, Prinicipal Conductor of the Staatskapelle Dreseden, in this highly anticipated Carnegie Hall performance, wielded his baton as if it were an impressionist painter's brush, eliciting delicate brushstrokes of tonality here, a dollop of pointillist color there.  Internal passages from woodwinds and cellos shimmered in the intricately woven passages of Brahms's, masterpiece of orchestral complexity. The opening Allegro mon troppo seemed, at times, to take on elements of the dance, as Thielemann's deft conducting allowed the leitmotif to unfold. The Staatskapelle is in the midst of a national tour that recently brought it to the Armour Stage at Chicago's Symphony Center. 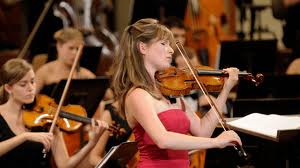 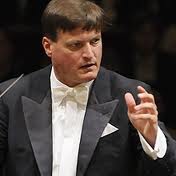 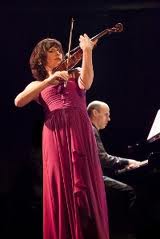 So impassioned was Batiashvili's playing that it caused one of my esteemed colleagues to proclaim during the interval to almost anyone within earshot; "forget every live performance you've ever heard  (of the Brahms Violin Concerto). Forget all the recordings you have at home. She's simply the best!"
Posted by Dwight the Connoisseur at 4:14 AM