NEW YORK--The highlight of the 2013 Tribeca Film Festival was the World Premiere of Gore Vidal The United States of Amnesia, a film that chronicled the stupendous life of the iconic literary lion, social commentator and historical chronicler.

No single figure in any century has had such a profound effect at all levels of media and social interaction as Gore Vidal. As a writer, his best-selling works probed deep into the annals of history, revealing the flesh and blood intrigue and psychological pistons that drove the great minds of our nation's history. As a social commentator, his was the face and voice of scathing political commentary, perhaps single-handedly creating a new medium of social commentary that would dominate the airwaves for decades to come.  In a professional life that spanned more than half a century, he is seen as  not merely a witness to his time, but as a major influence, opinion maker and pivotal force.

To the political manner born, Vidal began his professional life as a teen-aged page for his maternal grandfather, the legendary blind Senator Thomas Prior Gore of Oklahoma. Young Vidal read and wrote his grandfather's important documents and speeches and learned first hands the inner workings of American politics. His close observations would serve him well in his later literary, political and social endeavors. Coincidentally, he further linked himself to the seat of lasting power through his mother's marriage to Hugh Auchincloss, a wealthy financier, who, in turn, divorced her and married Jacqueline Kennedy's mother, establishing a connection between Vidal and the Kennedy dynasty that would persist through the presidency of John F Kennedy.

After graduation with honors rom Exeter, he entered the Reserve Army Corps and then served as an officer with the Army Transportation Corps on board a ship in the Aleutian Islands. It was during the dismal drudgery of his service onboard ship, that he passed the time writing his first novel, WILLIWAW, which became and instant New York Times best seller. At 19 years old, a new literary lion was born who, from the outset, drew comparisons to Hemingway and Stephen Crane. His name quickly became associated with other young postwar literary voices of the time, including Norman Mailer, his friend and sometime arch-rival and Truman Capote.

Gore Vidal The United States of Amnesia not only surveys the landscape of this great literary mind, it chronicles the continued growing pains of US democracy from the unique perspective of one whose thoughts and actions have been a driving force in its progress.

Besides Vidal's own thunderous voice, there are those of his contemporaries, both friend and foe, who weigh in a voice that continues to resonate, even in the wake of his death at 86 in 2012.

Gore Vidal The United States of America is must viewing for every American who believes that democracy is worth fighting for, even if you are one of its most fierce and feared critics. 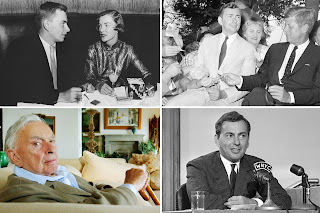