Gounod's "Faust": a bargain with the devil takes nuclear twist

McAnuff jettisons the action from the mid-19th century world of Faust's laboratory to the world of physicist J. Robert Oppenheimer and the end of World War II, when the U.S. dropped the A bomb on Japan. Like Faust, Oppenheimer is said to have made a Faustian deal with the devil to ensure a U.S. victory.

The stark sets by Robert Brill, stage dominating video projections by video designer sean Nieuwenhuis, lighting by Peter Mumford, costumes by Paul Tazewell and over-the-top choreography by Kelly Devine, and the superb work of the Metropolitan Opera Chorus make for a thrilling performance.

Canadian bass-baritone John Relyea would have practically run away with the performance as Mephistopheles were it not for the superb dramatic singing of Piotr Beczala in the title role and the searingly sensuous acting and silvery voice of Marina Poplavskaya as Faust's subconscious love interest Marguerite. Her fiery portrayal dug beneath the skin of her character and rooted each of her scenes with Faust/Beczala in the frenzied psychological sea storm that is Faust's mental state.

The production is not only visually stunning, but is punctuated by a tableau of  sweeping orchestral backdrops, thanks to the brilliant conducting of Alain Altinoglu and the artistry of the Met Opera orchestra's  cadre of musicians and soloists. One of the most effective and chilling scenes shows the entire chorus, dressed in white lab coats, singing on the winding staircase of Faust's infinitely dark and foreboding lab.  By the time the opera careens into an eerie finale , we are left to wonder if the events that transpired over the past three hours and forty-five minutes were either the final desperate moments of a  delusional madman, or the mere last-gasp hallucinations of a pathetic man as he lay dying. 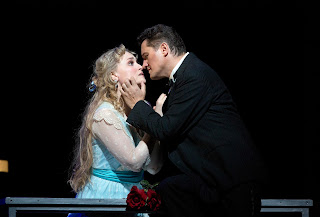 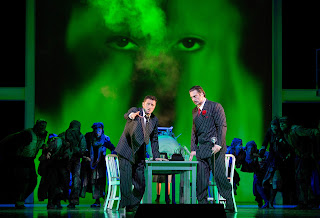 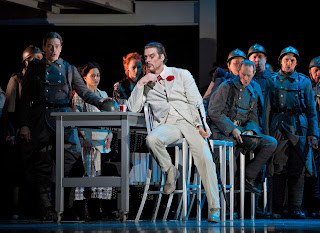 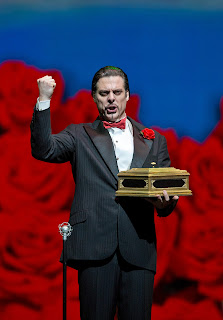 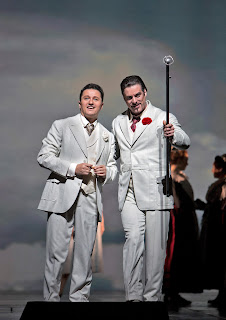 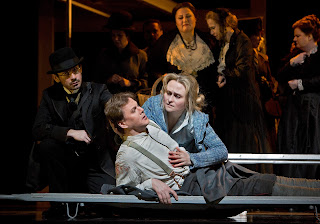 Posted by Dwight the Connoisseur at 4:00 PM