NEW YORK---Sir Simon Rattle conducted The Philadelphia Orchestra at Carnegie Hall in a mixed bag of a program that explored music from the iconoclastic heights of Anton Webern's Passacaglia, Opus 1 and Alan Berg's Three Fragments from Wozzeck, Opus 7 (with Canadian soprano Barbara Hannigan) to the satirical raucousness of Gyorgy Ligeti's Mysteries of the Macabre (also with Hannigan in a leather festishest's dream of a patent leather costume), to the sublime, rapturous wonder of Ludwig Van Beethoven's Symphony No. 6 in F Major, Opus 68, "Pastoral."

The program opened with Anton Webern's heartfelt Passacaglia, Opus 1, written while Webern was an early disciple of that patron saint of modern 20th century music, Arnold Schoenberg. For all his  later penchant for groundbreaking atonality and sparse, punctuated music, this was his decidedly most Romantic piece, building to great swells of sentimental excess and sweeping, all-absorbing themes.
Sir Simon and The Philadelphia Orchestra built the overlapping themes, which began with solid work from the bass section of the orchestra, until it completely engulfed the central theme in a vortex of turmoil, only to quickly subside and vanish in thin air. Sir Simon's ability to develop the composition's inner voices and extract rich melodies from the depths of Webern's densely orchestrated piece, showed clearly why he is in such demand as an interpreter of 20th Century music masters.

Alan Berg's Three Fragments from the dramatically tragic opera Wozzeck, Opus 7, with the powerhouse soprano Barbara Hannigan similarly showed Sir Simon's skill at developing tonal color from a full palate of timbre and texture. Hannigan's supple voice pierced through the challenging highs and lows of Berg's difficult vocal passages with ease, punctuating the sharply defined emotions of his opera, which depicted death and depravity in stark musical outlines. You almost don't have to know the plot or what's being sung, to realize the horrors that unfold in this opera, which is partially based on real-life events. Hannigan's ability to reach a nearly impossible interval, that only someone with the keenest sense of perfect pitch could reach was, in itself, a marvel to behold.

Her superlative performance of the Berg was only upstaged by her performance of excerpts from Gyorgy Ligeti's satirical opera Mysteries of the Macabre. Hannigan swept onstage in a scanty patent leather number straight out of a dominatrix's closet! Fortunately, she has the slender, shapely body to pull it off and the boffo pipes to punctuate Ligeti's raucuos, biting lyrics that almost border on hip-hop and rap in their percussive expressiveness and pejorative content. Even Sir Simon got into the act, with soloist and conductor playfully edging each other off the podium, (and Hannigan fake "conducting"), all while trading butt kicks and verbal jabs. It was thoroughly hilarious. The orchestra was set up with a unique configuration that emphasized string and percussion instruments from bongos, maracas and castanets to the glockenspiel, military drum, police whistle, tom-tom, harpsichord, piano and mandolin. The disparate conglomeration of instruments only heightened the frenetic and disturbing elements of the music that still maintained a sense of humor and beauty in Sir Simon's and Hannigan's interpretation.

The performance that followed was 180 degrees away. After a lengthy pause, the reconfigured orchestra embarked on Beethoven's lushly programatic "Pastoral" Symphony No. 6 in F Major. This is as close to anything relating to a tone poem written by the composer, credited with becoming the bridge between the Classical and Romantic music periods. The "Pastoral" is a composition clearly intended to set a mood and paint a musical portrait. Sir Simon and The Philadelphia Orchestra uncovered all of its rich musical texture and color, with Sir Simon turning the point of the baton back into his hand in order to let his supple hands and lithe fingers guide the orchestra, shaping musical passages with depth and clarity. Sir Simon seemed to find inner voices, even orchestral "choral" textures within Beethoven's tightly woven orchestrations. At one moment, he pointed a finger at the horn section to intensify its playing of what was a background theme in order to lift it up and have it resonate above the swelling crescendo of the rest of the orchestra. It created a spine-tingling effect that set up the thrills that were to come.

For anyone who may have heard the Pastoral countless times in the past, this was a performance like none other. Sir Simon entered a state of ecstasy in the Allegretto,  leading to the finale. So caught up in the rapture of the moment was he, that he began mouthing inaudible "lyrics" to  the "Shepherds hymn-Happy and thankful feelings after the storm," as the reverential music swirled around him.  The title of the passage is Beethoven's own and Sir Simon made it clear why it was so named.  Beethoven wrote the inscription "Pastoral Symphony, or Recollections of Country Life" on the title page of this, one of his most glorious works. Sir Simon Rattle and The Philadelphia Orchestra honored the composer's intent by lifting the work to the status of a Benediction. 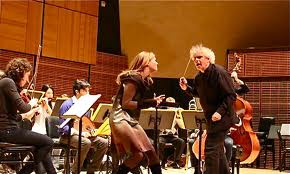 The S & M getup Hannigan wore for the Ligeti performance 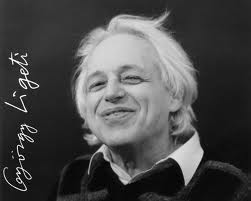 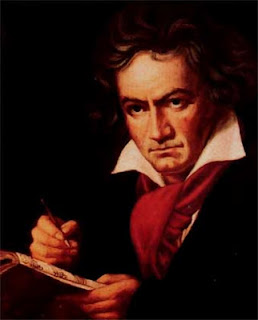 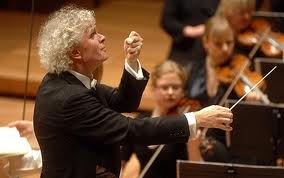 Sir Simon Rattle in a moment of ecstacy

Posted by Dwight the Connoisseur at 1:46 PM