FLASHDANCE-THE MUSICAL,  the stage adaptation of the 1983 Academy Award winning film that starred Chicago/Hyde Park native Jennifer Beals, is making a final stop in Chicago before a second company begins an open-ended engagement on Broadway, to celebrate the Paramount Pictures film's 30th anniversary. The Chicago engagement is for a lmited two week run through August 18, 2013. The touring company continues, opening in Memphis September 17 and Indianapolis October 1.

A stellar cast, with strong singing voices, electrifying dance moves and explosive multi-media sets and lighting, made this Broadway In Chicago presentation one of the most seamlessly polished offerings of the season.

FLASHDANCE tells the story of spunky Alex Owens (a mesmerizing Jillian Mueller), one of the few, if only female welders at a Pittsburgh steel mill, who is also an exotic bar dancer by night. With dreams of hitting the big time as a legitimate stage dancer and attending the prestigious Shipley Dance School, she butts heads and eventually falls in love with the boss's son, Nick Hurley (a sylvan voiced Matthew Hydzik), who tries, against stubborn Alex's wishes, to use his influence to help her get an audition at the dance school, and who also wrestles with the moral challenges of being the heir apparent in a family business that he has no desire to enter.

The dancing is stupendous, among some of the best on any Broadway stage and the characters are well drawn and leap off the stage to grab the audience by the heartstrings.  All of the hit songs and dance numbers from the film are presented with panache and sung with a verve and enthusiasm that makes it seem as if we're hearing them for the first time. FLASHDANCE, the original movie, won an Academy Award for the title song "Flashdance-What a Feeling" and the songs "Maniac," "Gloria,", "Manhunt," and "I Love Rock and Roll" all became Top Ten hits on the radio. The film revolutioned pop culture and grossed over a 150 million dollars, making it the third highest-grossing film of 1983. The soundtrack won the Grammy Award.

The current touring production of FLASHDANCE THE MUSICAL captures all of the original explosive energy of the film and with the use of brilliant lighting effects, imaginative costumes and craetive use of digital images and sound effects and kinetic dancing.

Some of the standout performances include Mueller, in the title role, who dazzles with some gravity defying dance moves, including the famous show-stopping shower dance scene and the highly emotive audition dance scene, in which she moves with rare abandon. She was even able to elevate some of the more talkie lines of the lengthy vocal soliloquy in the second act to a spine-tingling finale. Matthew Hydzik used his bright. flexible voice to great advantage, navigating the tricky octave jumps with ease and infusing them with an almost mystical, haunting quality that made the believability to his character even more so. DeQuina Moore as Kiki, rocked everyone's collective world with a sassy rendition of Manhunt that brought to mind the great Grace Jones.

Chameleon Girls, which opened Act Two, showed off the collective dancing and vocal skills of the slithering, acrobatic female performers and set the stage for the thrilling roller coaster ride that brought the evening to its glittering climax and thunderous applause from the appreciative audience. What A Feeling! 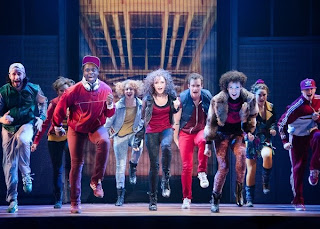 Posted by Dwight the Connoisseur at 8:31 AM