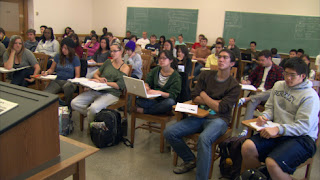 A scene from "At Berkeley"


NEW YORK--Veteran documentary filmmaker Frederick Wiseman shines again in another unflinching look at one of America's most controversial and celebrated institutions in his new "At Berkeley" (2013), which will be presented at the 51st New York Film Festival on Saturday, September 28 at 4:30pm in the Walter Reede Theatre, Lincoln Center, with a live Q & A with the filmmaker present, following the film. Clicking in at a exhaustive four hours and four minutes, the film takes an kalaidoscopic look at the inner workings of the university from the multiple viewpoints of faculty, students, administrators, and even maintenance workers and the owners of nearby shops and restaurants and other service providers whose businesses are intertwined with that of the university.  Wiseman's work is best described as "oberservational," with the camera recording often mind-numbing events, such as staff meetings and roundtable discussions, without so much as a line of off-camera narration or any subtitles or identifying supers. Wiseman, now 83 years old, and his work are the very embodiment of the concept recognized today as "reality tv," with his body of fllm work which began in 1963 with probing examinations of social institutions (Hospital-1977, High School-1968, High School II-1994). His film "Law & Order," which examines police work from the inside out, was light years ahead of the likewise named Tv franchise, decades before its inception.

Trained at Yale Law School and a law professor at Boston University College of Law before embarking on a career as a filmmaker, Wiseman takes no sides, nor does he take any prisoners. Winner of the Peabody Award and both the Guggenheim and MacArthur Fellowships,  "At Berkeley" stands now as his best work and a culmination of the refinement of his art. Particularly telling are two scenes; one depicting a meeting of administrators crafting new school policies which are met with dissatisfaction and, eventually, protests by the student body. One of the administrators offered that he was a student at Berkeley and was an active participant in the ground-shattering Free Speech Movement. One of the catch phrases of the student movement was "Do Not Fold, Bend or Staple Me," which referred to the inscription on computer programming cards of the then IBM computer systems used at the school. He offered that the feeling of institutionalization by the students still persists today, with decisions being made for them, without their involvement at the decision-making level. In short, very little has changed and the university is folding back  on itself and the time-warp continuum, facing the same challenges of self-determination by students and the conflict with top-down management tactics by the university. Another gripping moment was the exchange of a bi-racial black and hispanic student with her white counterparts who questioned their sincerity in raising the issue of white students who are now finding themselves financially challenged by newly created impoverishment due to the ongoing recession. "Why should I be concerned about your new interest in poverty and your inability to get student aid when I've been suffering as have other minority students for decades and noone cared about me and my poverty then?" The discomfort in the room is both visual and palpable. Wiseman's film is a long sit, but its guaranteed that not one person will walk out on it as it bores deeper into the soul of the type of discomforting issues faced, not only by the university, but by corporations and governmental bodies everywhere.
Posted by Dwight the Connoisseur at 3:31 AM