NEW YORK--Music audiences never seem to tire of the music of Mozart and Beethoven. Place the names of any of the "big three," Mozart, Beethoven and Bach, on a symphonic program, and its almost guaranteed to sell tickets. Such was the case with the Opening Night programs of Lincoln Center's Mostly Mozart Festival July 27-August 24, 2013. This year's festival features the music of Ludwig Van Beethoven whose musical genius was said to have been inspired and molded by Mozart's towering presence.

Now just a few years shy of celebrating a half century of existence, this year's edition of  the Mostly Mozart Festival is blessed with the return of its spirited Music Director, the esteemed French conductor Louis Langree', and the collaboration of two outstanding soloists, the voluptuously voiced mezzo-soprano Alice Coote in two of Mozart's dramatic arias, and fellow Frenchman Jean-Efflam Bavouzet, in Beethoven's Piano Concerto No.4 in G major.

Adding to the aura of excitement was the innovation of thrusting the stage out into the audience seating area and surrounding the orchestra with seating onstage, which made for both an illusion of intimacy in the vast expanse of Avery Fisher Hall and a rare, if at times, overly revealing display of the Mostly Mozart Orchestra's considerable strengths and forgivable weaknesses.

Conductor Langree' and the orchestra dispatched the opening selection, Beethoven's Overture to the tragic play Coriolan, with ease and authority. Langree' brought out the flashier elements of this short (8 mnutes) but lively piece, by punctuating the high notes of the horn section and the rumbling lines of the bass. The contrast made for a thrilling performance.

The lovely Alice Coote brought a smooth, luscious approach to Mozart's concert aria Ch' io mis scordi di te...Non temer, amato bene (that I forget you? Fear not, my dearest beloved). At times, Maestro Langree's interpretation seemed a bit rushed, and didn't allow for the kinds of pauses and constructive silences that Ms. Coote could have brought to bear. Perhaps the conductor was in a hurry to get to the centerpiece of the evening, the effervescent pianism of Mssr. Bavouzet.

Beethoven's Piano Concerto No. 4 in G Major is on the short list of towering works that continues to grace the piano repertoire of many of the finest soloists on the concert stage. Beethoven himself played his own premiere of the work and it has not left the roster of seasonal offerings by professional orchestras since that august evening. Maestro Langree'  attacked the opening bars with an assured hand.  Soloist Bavouzet seemed un-phased by the inherent majesty of the moment and eased into his own highly-stylized interpretation, contrasting moments of brilliance with torrents of notes played with quicksilver sharpness and introspective, moody, almost evocative passages that took the audience on a parallel journey into the complex psyche of both the composer and his interpreter.

Ms. Coote at times seemed to be drowned out by the sumptuous orchestrations of Mozart's  aria
Parto, parto, ma tu ben mio (I go, but, my dearest, make peace again with me) from the opera La Clemenza di Tito (the pardoning of Titus). This perhaps owed to the extremely "live" acoustical situation fostered by the unusual configuration of the orchestra thrust so prominently into the audience proper.

An unfortunately timed after hours concert in the Kaplan Penthouse across the street, entitled "A Little Night Music" with Mr. Bavouzet in an intimate solo piano concert of Debussy's Preludes, Book 2, forced many to scurry from the auditorium just as the closing notes of the dramatic first movement of Beethoven's mighty Symphony No. 7 in A major waned into silence. An errant, over-reaching note from the brass section marred what otherwise was a breathless, rapturous finale to this majestic work. No matter, this was, after all, a festival and the effusive spirit  that  permeated the evening certainly prevailed.

Bavouzet's performance at "A Little Night Music" was the revelation of the evening and ranks in the mind of this reviewer as one of the most captivating interchanges in recent memory between a performer and his audience. Bavouzet shared his  enthusiasm for Debussy in a highly enlightening description of his work and the significance of his then unorthodox compositional approaches. He pointed out, for example the use of a D flat motif that concluded the third composition in his Preludes, Book 2, La puerta del vino (the wine gate), which served as the beginning notes of the opening piece, Brouillards (Fog), and was repeated several times throughout the wide ranging work. At times, Bavouzet used self-deprecating humor to further ingratiate himself to the audience and to draw them closer to his luminous vision of this great composer. His playing, after nearly twenty minutes of explication, only served to further cast his enchanting spell. The combination of his warm , emotive playing, the intimate setting, with its caberet-style tables, and the dramatic view of the lights of the midtown Manhattan skyline, and the presence of glasses of complementary William Hill wines and Pellegrino sparkling water, which were served to each of the hundred or so fortunate guests, only served to heighten the amber glow of the experience. 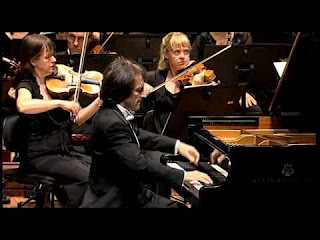 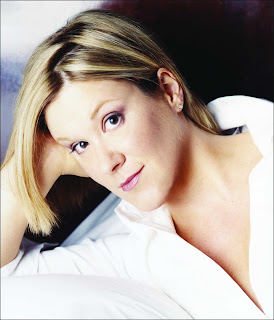 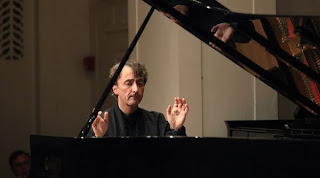 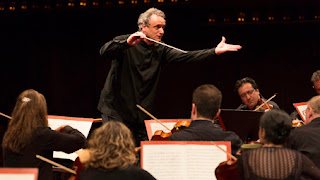 Posted by Dwight the Connoisseur at 12:08 PM