NEW YORK--Captain Phillips is director  Paul Greengrass's gripping account of the 2009 hijacking of the U.S. container ship Maersk Alabama by a rag-tag crew of Somali pirates. Tom Hanks is in the titled role as Captain Richard Phillips and accomplishes another Oscar worthy performance. The first actor in 50 years to be awarded back-to-back Best Actor Academy Awards (Philadelphia-1993, Forrest Gump-1994), his portrayal is already garnering Oscar buzz. Director Paul Greengrass is already known for his pulse-quickening work in such feature films as The Bourne Supremacy and Bloody Sunday. He earned an Academy Award nomination for Best Director and a Best Original Screenplay nomination from the Writers Guild of America for his work on United 93, another fact-based action thriller on the heroic deeds of passengers during the downing of a commercial jet by Islamic terrorists on 9/11. 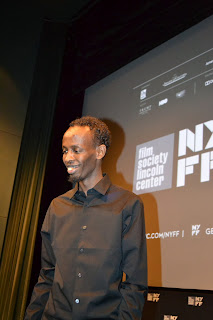 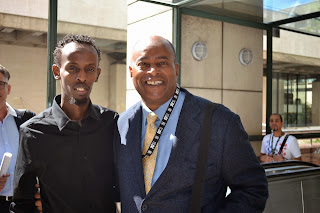 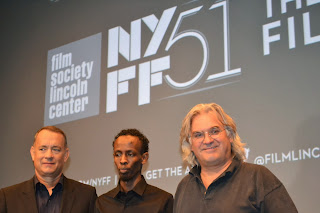 There are no soft-shaded dissolves or swelling orchestral interludes in Greengrass's heart-pounding accounting of the hijacking. Instead, the camera hones in on the central characters and follows them in an almost documentary style, allowing the action to unfold with an unblinking eye. The score, as it were, almost mimics the mechanically rhythmic and unrelenting pounding of the massive ship's own engines. Everything about the film breathes authenticity, from the script, written by Billy Ray (Shattered Glass) based on Captain Richard Phillip's own personal rendering of the events in his book "A Captain's Day," to the use of the actual Navy ships, personnel and helicopters, including the USS Halyburton, which was the ship used in the 2009 rescue mission. Captain Richard Phillips was present at the New York Premiere and walked the Red Carpet along with Tom Hanks, Barkhad Abdi and Paul Greengrass. (According to media reports, one of the Navy Seals who was part of the mission and who reportedly made a cameo appearance in the film, slipped into the New York Premiere undetected by the phalanx of media on the Red Carpet.)
Reality was the name of the game in the filming of Captain Phillip. Maersk provided a merchant vessel that was almost identical to the Maersk Alabama, the Alexander. Her crew of 22 merchant mariners remained on board during the two and a half months of filming to man the ship. The Navy provided the USS Truxton, an almost identical match, to stand in for the 510-foot-long guided missile destroyer USS Bainbridge that was actually used in the rescue operation. Real life officers and sailors served on the ship along with two sailors who actually participated in the 2009 rescue mission. A civilian SEAL advisor secured the services of ten former SEALD to take the roles of the men who carried out the close-in sniper operation.

At the news conference following the press screening of Captain Phillips on the day of the premiere,
Greengrass elucidated. "The entire film was shot at sea with the full cooperation and support of the US Navy. In fact, they insisted upon being involved. So everything you see in the film is real, including the scene where the pirates board the ship. That was not CG. In fact, that was one of the most difficult and dangerous scenes to shoot."
In the movie, pirates board the huge Maersk Alabama climbing ladders from a tiny makeshift skiff, that looks more like the boats used by soon-to-be-drowning refugees than a band of professional outlaws.
"We went through weeks of rigorous training," said Abdi, a first-time film actor, who had the daunting task of matching wits standing toe-to-toe with arguably one of the best actors in the world. "The whole thing was frightening, especially because I can't swim. I also had to learn to climb. I should have been scared, but that wasn't an option, when you're clinging to a flimsy ladder 100 feet above the surging water, the only thought you have is "I have to get to the top of that ship!"

Greengrass humanizes the Somali pirates, rather than painting them as one dimensional villains. He takes us almost immediately to the Somali village where they are almost forced into criminal action by a band of Uzi-wielding warlords. The pirate skiffs are a way out of the grinding poverty of the village where the inhabitants, including the pirates, eat a constant diet of khat, an hallucinogenic plant which also, conveniently, suppresses the appetite in a land where food is scarse. The pirates can be seen stuffing their razor-thin cheeks with the substance. Things start to unravel go haywire when they run out of their dietary and psychological crutch.

Moving the ships around in surging waters also proved to be a daunting and dangerous task. "The sea can be calm one minute and then erupt into giant swells the next.  Getting all of the ships and the helicopter and the rescue team in position for the final rescue scene was a monumental logistical endeavor. Not to mention the job of maneuvering the five hundred foot container ship."

Not only were the most dramatic scenes filmed in realistic fashion, the final scene, where Captain Phillips was brought onboard the rescue ship and taken to the ship's infirmary and examined by Navy medical personnel, was filmed in the actual infirmary where the event occured and, by happenstance, with members of the medical team who attended the real Captain Phillips in 2009.  "We were taking a tour of the ship to see where we might shoot some interior scenes. We had tried to shoot the final scene elsewhere, but it just didn't seem to work out. When we went below decks and walked through the infirmary, we learned that the Navy personnel on duty that day, including the captain in charge of the medical team, were the same people who had attended top Captain Phillips in 2009. We decided right then and there to set up lights and shoot the final scene there. After the medical staff got over the initial jitters of being on camera, it went smoothly. It turned out to be one of the most moving  scenes in the film because it had the ring of truth. That's the most important thing about the entire film is that all of the actors and the crew strove to find the truth in every situation depicted in the film."
Posted by Dwight the Connoisseur at 11:06 AM