US OPEN THE "SUPER BOWL" OF TENNIS

NEW YORK--As the waning days of summer lie in that vacuum before the World Series and the start of the football season and friends and family get in the last of the backyard barbeques and lazy days at the beach, there's the sound of tennis at Forest Hills in New York and the US Open. Fast growing in popularity, TV and internet viewership and attendance, it ranks right up there with  Super Bowl in popularity and surpasses it in terms of overall economic impact. This year, the USTA is expecting more than 700 thousand people to descend on the Billie Jean King National Tennis Center and pump a whopping $1 billion into the local economy over the next two weeks.

Anyone who wrote off the first day of play as a mere warm up was sadly mistaken. There were some big names on the main courts at Arthur Ashe and Louis Armstrong stadiums, all of whom managed to win their respective matches and move into second round play.

Nighttime opening ceremonies would bring out the stars and the politicians; Mayor Bill Di Blasio and former Mayor David Dinkins, who created the deal that brought about the tennis center, and a cavalcade of stars, including the Winans, gospel recording artists who sang the National Anthem, Alec Baldwin, Donald Trump, Gayle King, among others, but today belonged to the real stars of the US Open, the tennis players, competing for one of the biggest purses in the game.

Perhaps the most watched and anticipated was the match between Venus Williams vs Kimiko Date-Krumm of Japan. Cynics might have dubbed it the "senior bowl" with the combined ages of the two contenders at 77 years old! Date-Krumm, the elder, at 43 years old (she turns 44 next month), had dropped out of professional tennis for a 12 year hiatus, only to come roaring back to a number 4 ranking. Venus, at 34, is lately on a summer winning streak with a runner-up win at the Montreal Open earlier this month, and an appearance in the quarterfinals at the Bank of the West Classic at Stanford, CA.

Williams seemed to be climbing back to the type of aggressive playing style that earned her five Wimbledon singles titles. Indeed, the expectation was that the match would be all about Venus, but it quickly got rocky, with Date-Krumm scoring the kind of searing forehand and drop shots, normally associated with Venus. It had been a long climb back from her diagnosis of Sjögren's syndrome, a little-known autoimmune disorder that causes severe fatigue and joint pain, and Venus seemed to be slipping back into the malaise. The intense heat and opening day jitters may have also been taking their toll. For a time though, it looked as if she might be making an early exit at the hands of the only player older than she in this year's tournament. The curtain started to look as if it would rain down early in the second set. Venus began to miss easy shots that passed right by her. She began to display that stoop-shouldered defeatist posture that in the past, spelled doom. Not so in the third set. A confounded Date-Krumm had a difficult time responding to William's paralyzing overhead shots and getting anywhere near her flummoxing cross court volleys.

An errant bee threatened to steal the show and caused at least three temporary delays in play. First buzzing around the head of Date-Krumm, the rogue bee interrupted her service game before deciding to hone in on Venus, perhaps attracted by the Dresden blue floral patterned tennis outfit that was reminiscent of an English garden. After landing on Venus' racket, an adroit ball person captured the bee in a towel and spirited it away, allowing play to resume. Ironically, the bee may have provided just the kind of distraction that Venus needed to lift her out of her doldrums. She seemed to snap to it and started to play like the Venus of old.  Perhaps Date-Krumm should have allowed the bee to continue to buzz around her head like a halo, because Williams collected her resolve and went on to trounce her 2-6, 6-3, 6-3 to win the match. In the post-game interview, Pam Shriver asked Venus if the bee was a tougher opponent than Date-Krumm, Venus laughed, saying, "The bee was a challenge, but easily, the answer is Kimiko hits the ball like nobody else." Today's win should provide just the momentum she'll need to face the winner of the Kiki Bertens, Timea Bacsinszky match. Venus hit only 44 per cent of her first serves and also racked up a whopping 36 unforced errors. Williams, the number 19 seed has her work cut out for her.

On the men's side, there was nothing pretty about Andy Murray's win over Robin Haase. Murray seemed overwhelmed by the heat and buggered by cramps and nagging fatigue to barely survive through a 6-3, 7-6, 1-6, 7-5 win over the Dutchman. Murray, the 2012 U.S. Open champion, suffered through 16 aces and gave up 51 unforced errors only to garner success with 25 of 39 chances at the net to seal a victory. Let's hope he fares better in the next round, when he faces the formidable Matthias Bachinger of Germany.
Sloane Stephens, the heiress apparent to the Venus/Serena throne, sailed to a wide-mouthed grin win over Annika Beck. Breezing to a blazing finish in just a minute over an hour, Stephens was ebullient in the postgame interview. "The big job now is just to stay focused and concentrate on a win in the next round. But I really want to thank the fans for coming out and supporting me, they have really made the difference." And to show her appreciation, she good-naturedly lobbed a handful of green tennis balls into the adoring crowd. 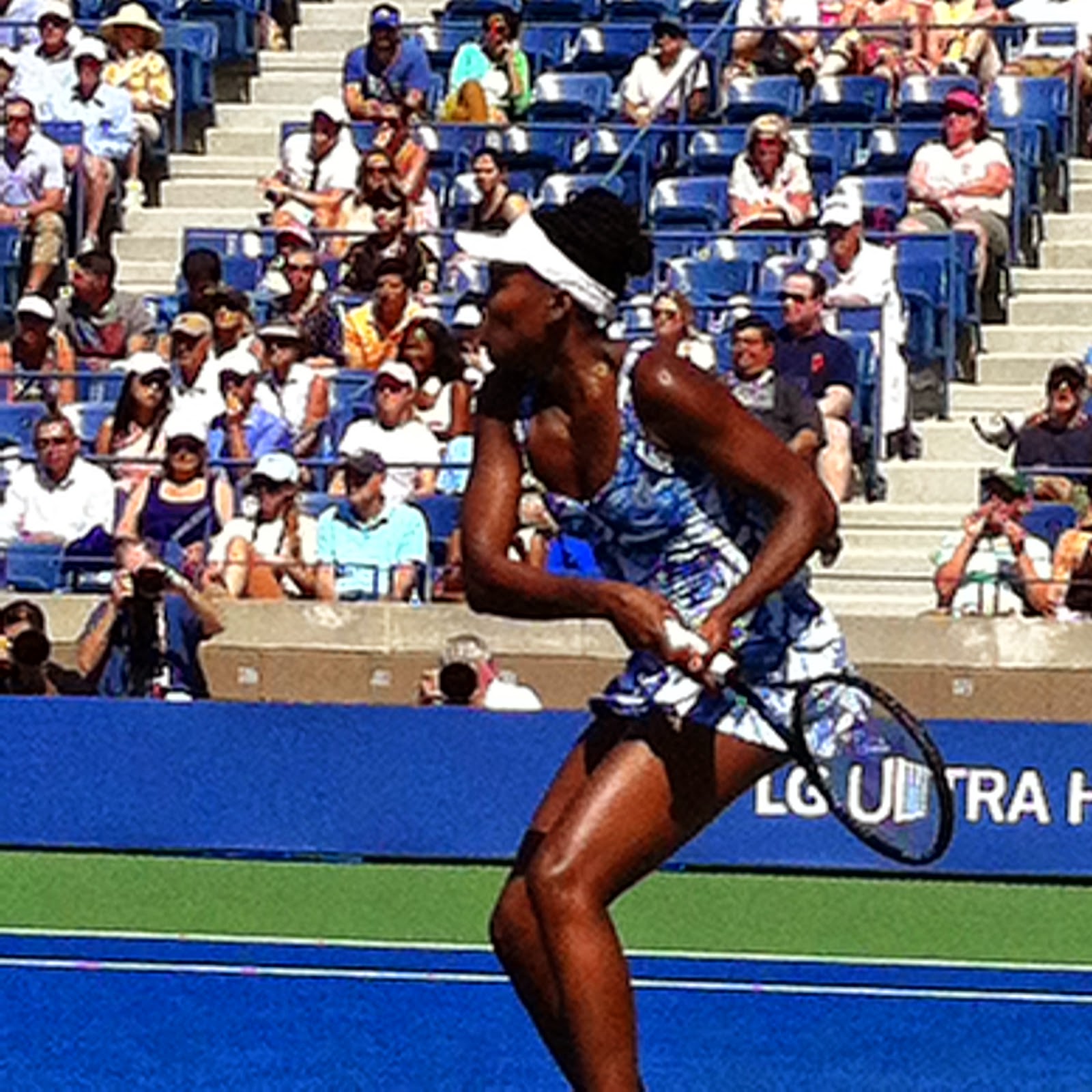 Venus delivers a devastating shot to her opponent 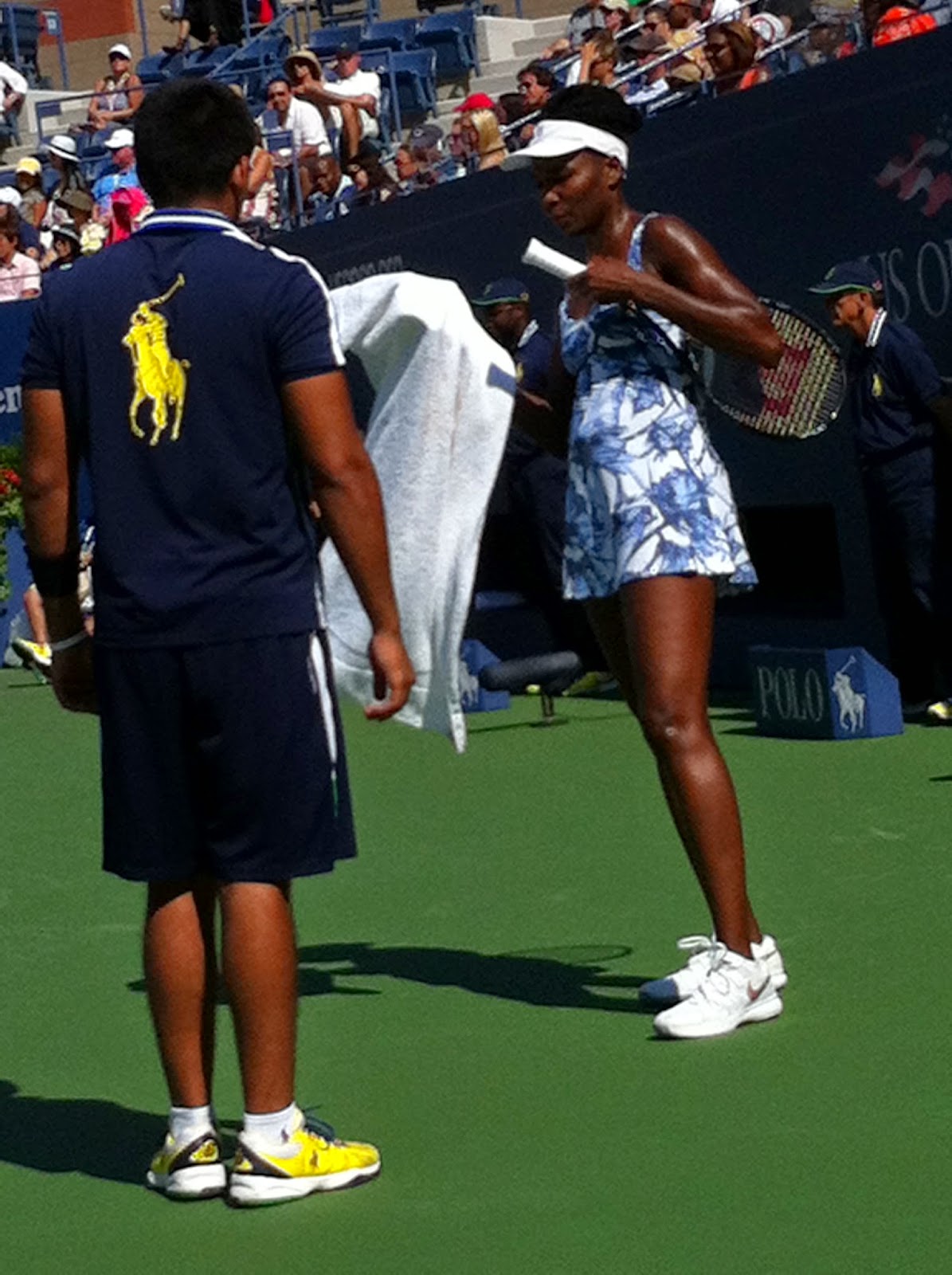 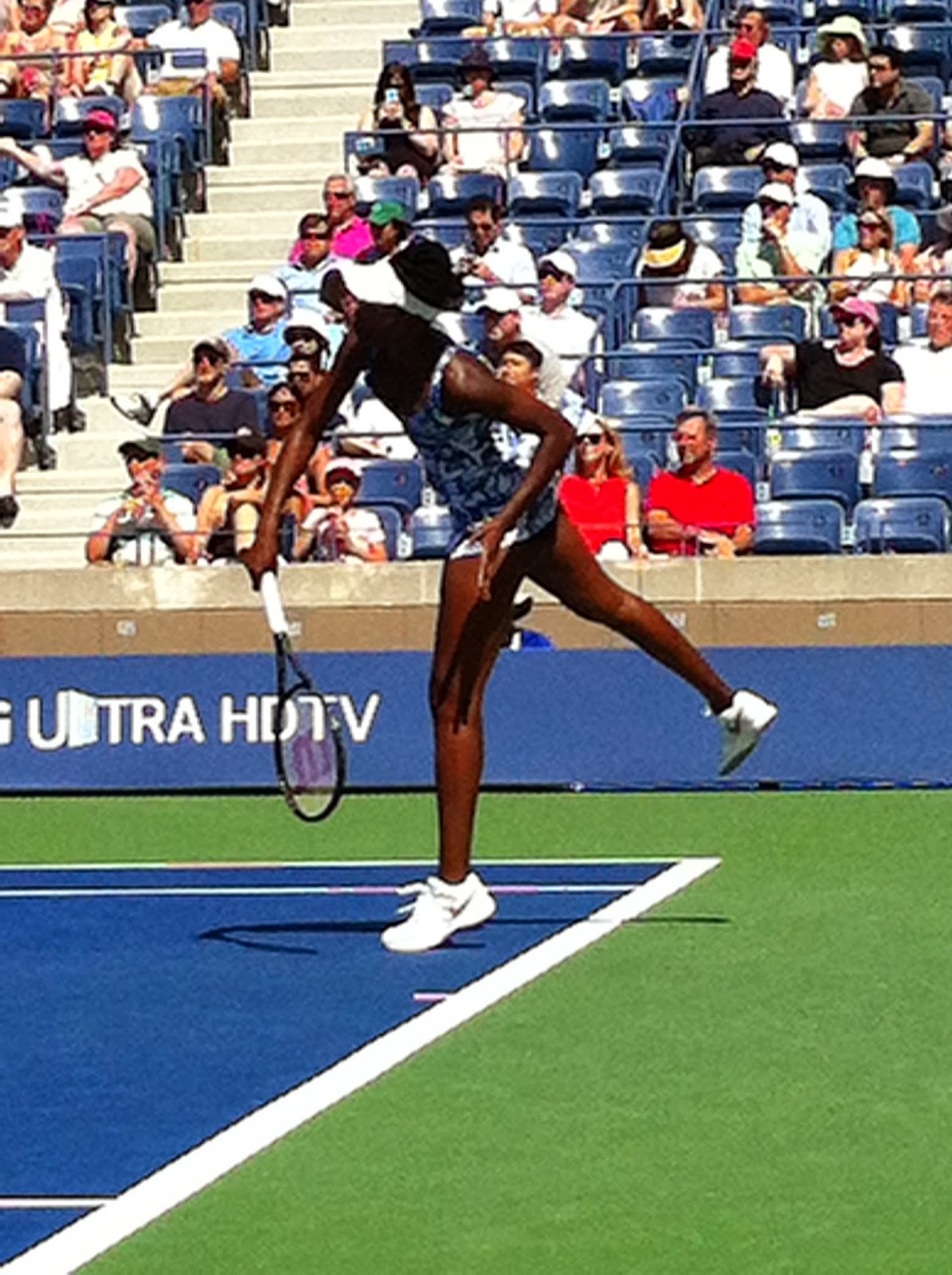 Posted by Dwight the Connoisseur at 7:44 PM