WTA Prepares its Stars for Life After Tennis

Visionary tennis activist Billie Jean King founded the Women's Tennis Association (WTA) in 1973 which united all of women's professional tennis in one tour. That same year the US Open, for the first time, offered equal prize money to men and women. From that auspicious beginning, focused more on improving the earning power of women tennis players, the WTA has added programs that enhance players’ athletic development and more recently that facilitate players’ ability to earn a college degree.

To celebrate its four decades of growth and ground breaking successes, the WTA launched its highly visible season-long 40 LOVE campaign in 2013 that highlighted the achievements of past and present professional women tennis players. With less public fanfare, the WTA also entered into an exclusive educational agreement with Indiana University East (IU East) in 2013 to provide women tennis players with the opportunity to obtain degrees through the school’s online degree completion programs.
A year later the WTA and IU East commemorated this unique partnership for athletes during the 2014 Western & Southern Open tournament at the Lindner Family Tennis Center in Cincinnati, OH. Venus Williams, who is pursuing a Bachelor of Science in Business Administration, was the first WTA player to enroll in the program for the 2013 spring term. The agreement was signed in August of the same year and today, due in part to Williams’ advocacy, 15 of the world’s top 200 players are enrolled in the program.

When asked to describe her experience with the program, Williams laughed, “Well, I have no life, but it has made me a better boss and it’s made me more aware of how I can make better business decisions.” The tennis pro, who boasts 20 Grand Slams in singles and doubles, is also a successful entrepreneur having launched her tennis and sportswear apparel business, EleVen by Venus. The IU program requires that participants have some college work under their belt.   Williams has that and more.  She earned a degree in fashion design which helped her translate her sense of style into her own apparel line that she prefers to wear over the major sportswear brands.  In the first round of the 2014 US Open she stepped out on the court dressed in her latest design -- a blue vintage floral closed grip dress that was talked about as much as her winning game performance.

Adjusting to academia in the midst of managing a physically and mentally demanding sports career she noted, “You have to be focused, balanced.  You have to balance your time so you don’t get that F.” Williams admitted, “I have to say accounting almost killed me.  I’m telling you, it messed my vision up.  Now I’m not an accountant but I’m okay.”

IU East is one of eight IU campuses and is located in Richmond, IN.  It offers 10 options for students to complete their bachelor’s degree online in English with an emphasis in Technical and Professional Writing, Mathematics, Natural Science and Mathematics with a Mathematics Concentration, Communication Studies, Business Administration, Criminal Justice, Political Science, Psychology, General Studies, and a Nursing RN to BSN Mobility Option. The credits, transcript, and diploma earned through IU East's online programs are identical to those from any IU campus.

Pleased about the growth of the program, IU East Chancellor Kathryn Cruz-Uribe said she anticipates that more players will be enrolling in the programs because “our current students are some of the best recruiters.”  The players benefit from the IU staff visiting tournament sites to answer questions, trouble shoot on-line issues and to cheer on players studying with them as Cruz-Uribe and staff did for Venus during her first round at the Open.

“It’s a good partnership,” explained Cruz-Uribe who pointed out that the two organizations meet frequently to build on their relationship. Impressed with the WTA track record, the Chancellor added that the WTA is the leader in developing their athletes in not only athletic competition, but in handling finances and providing educational opportunities to “prepare for a life after tennis.”

Williams agrees, “I think it’s important to explore yourself outside of tennis, because there’s so much in life and it (college studies) opens your eyes.” 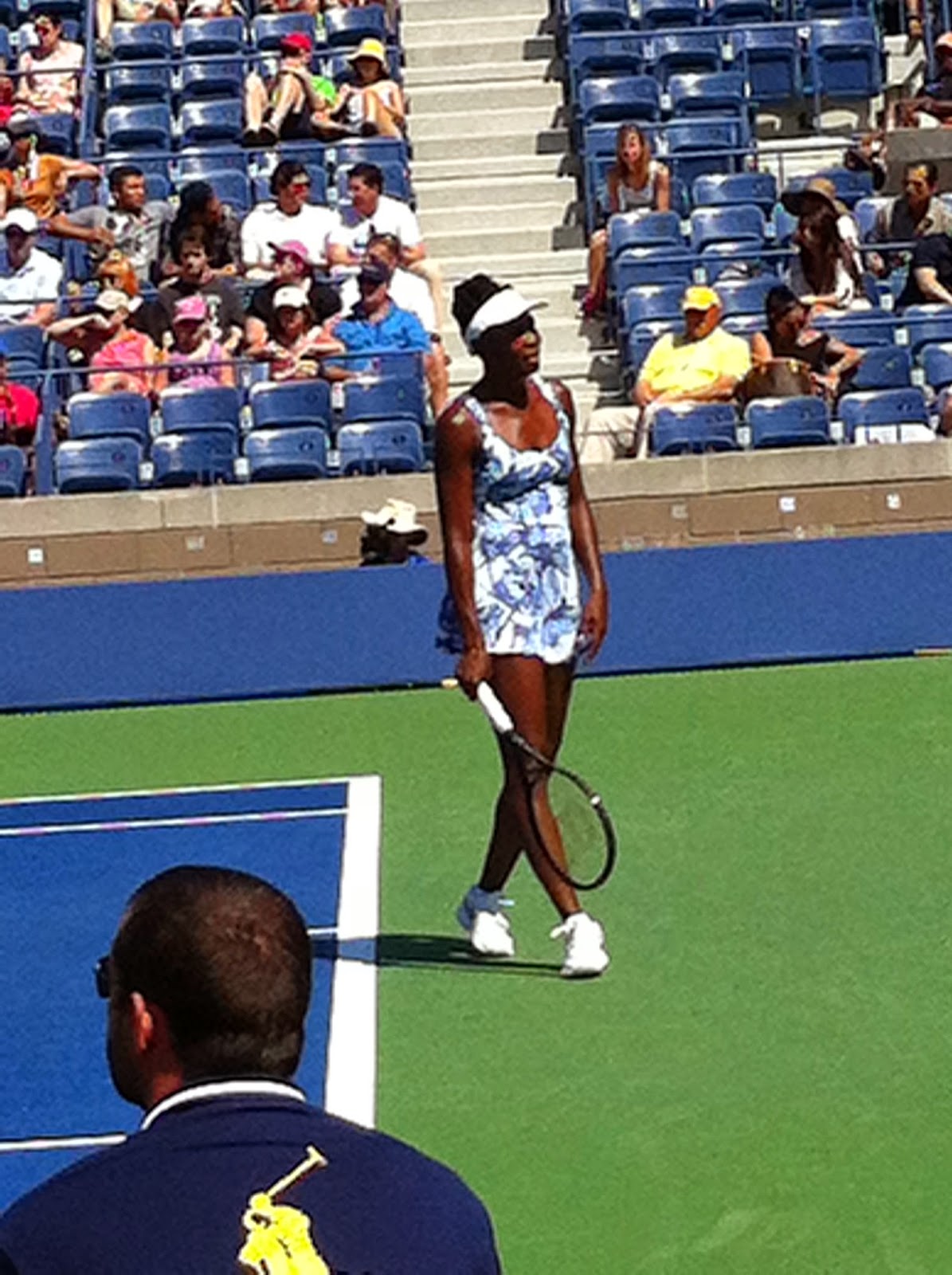 Venus sports her fashion creation, EleVen by Venus at the US Open 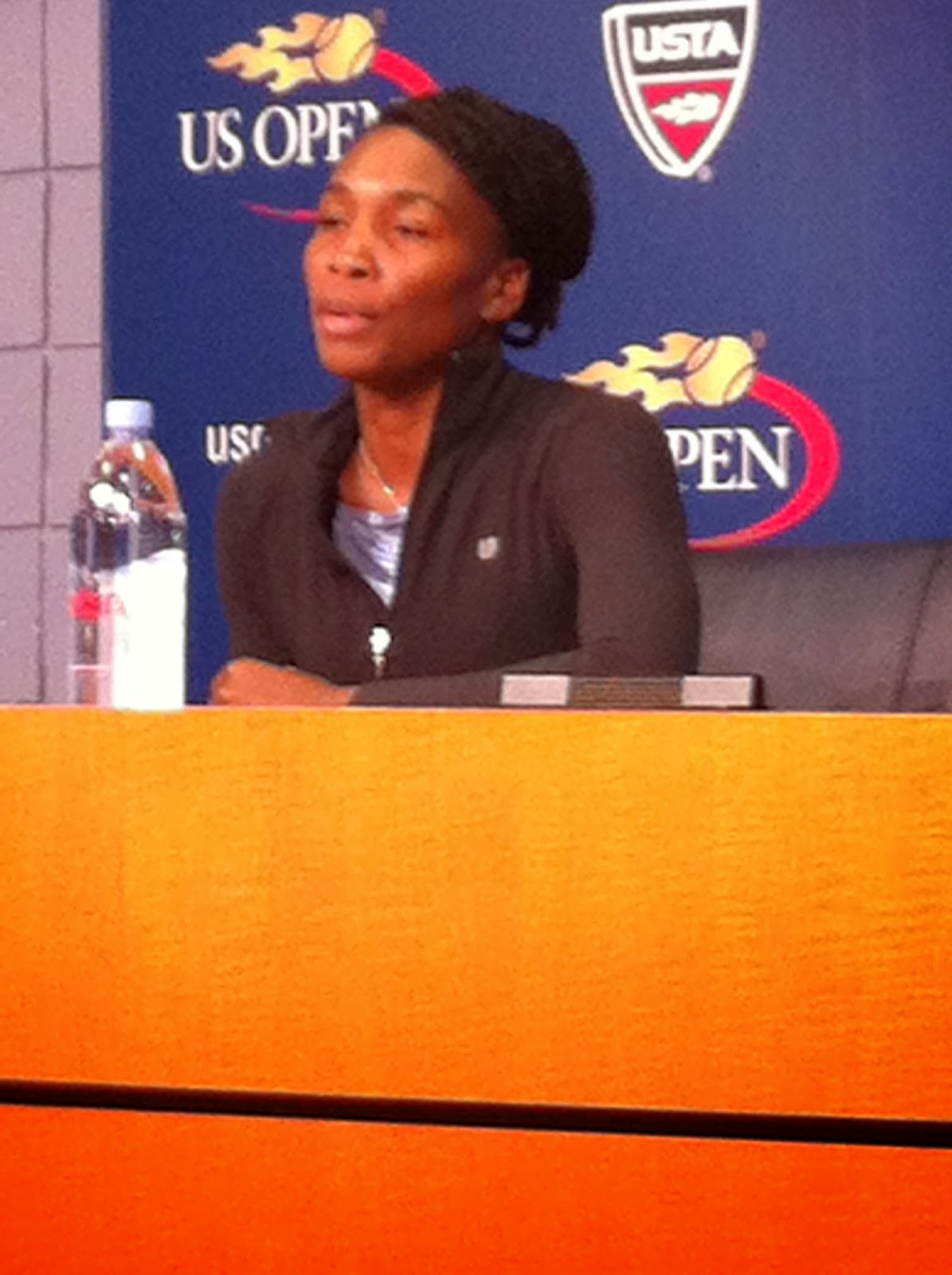 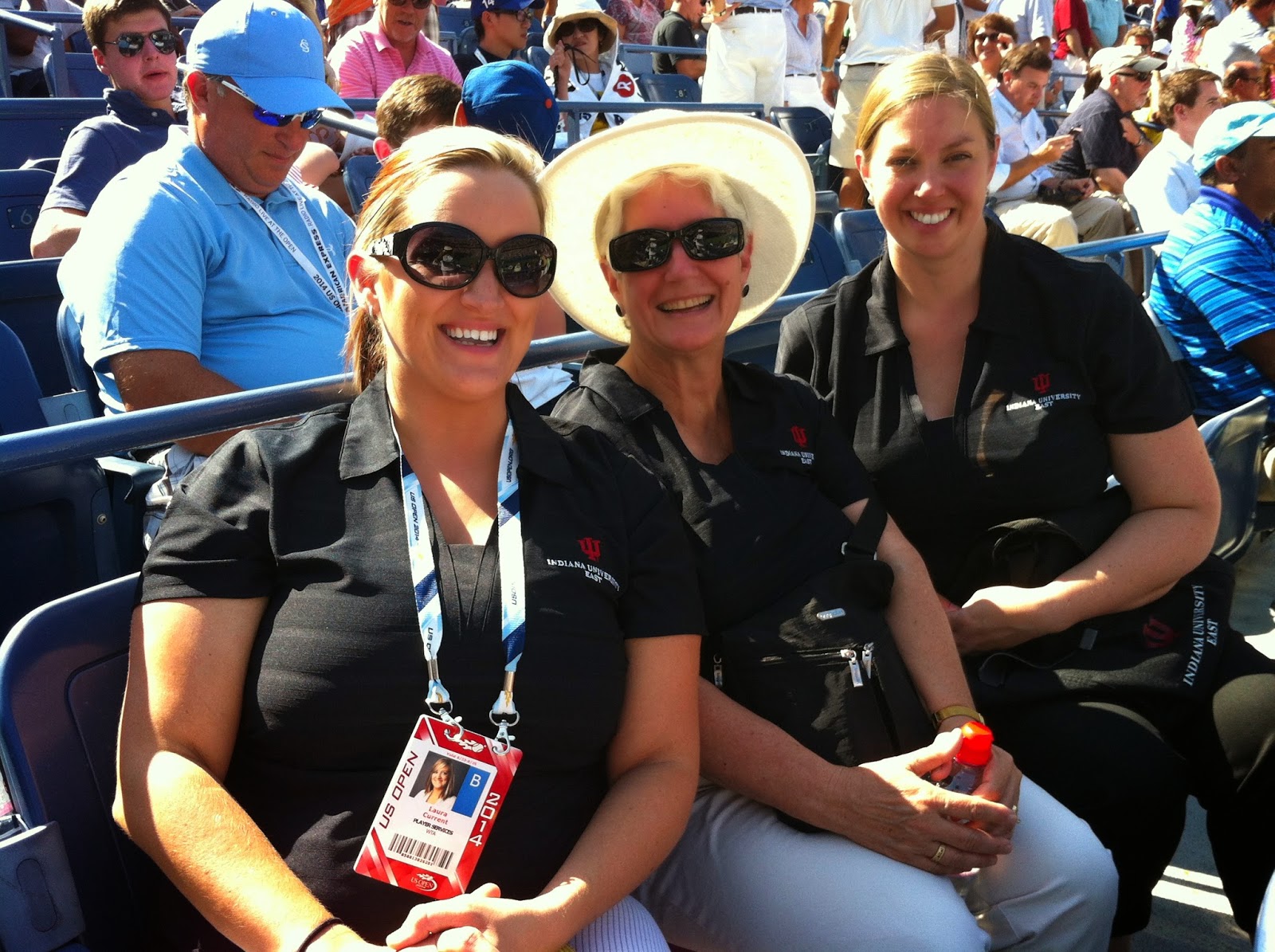 IU East Chancellor Kathryn Cruz-Uribe (c) at the US Open cheering on Venus Williams with her Office of Admissions staff Lori Current (l) and Molli Vanderpool (r)
Posted by Dwight the Connoisseur at 3:18 AM