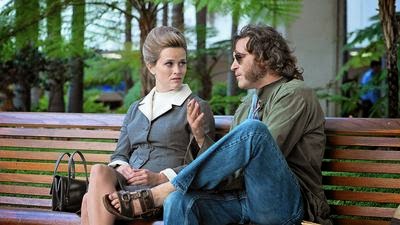 
A Warner Bros. Film,  Paul Thomas Anderson's "Inherent Vice" hits movie theatres Friday, January 9. An Academy Award nominated director, Anderson (Boogie Nights, There Will Be Blood), is the first to bring a Thomas Pynchon novel to the big screen   and in this return to black comedy, is loyal to Pynchon's wryly anarchic source material.  Using 35 mm film, His cinematographer and frequent collaborator Robert Elswit, uses the camera to maximum effect to evoke the emotional and comedic layering of each scene.

Set in the post-Charles Manson, Helter-Skelter world of  of 1970s Southern California, the film follows the stupified meanderings of a down-on-his luck private investigator, Doc Sportello, played brilliantly by Joaquin Phoenix and a diverse collection of well-known stars playing quircky characters who appear and disappear like pop-up weasels in a carney game, driving the plot along in whacky, herky-jerky fashion. The ploit becomes more complicated as the film lurches to conclusion and is, at times, hard to follow. Viewers have to listen carefully for clues. At times, hushed conversations that are barely audible reveal the most salient information. This a film that requires your undivided attention and a lot of leaning forward to make sure you hear everything. No doubt when the DVD comes out, there'll be a lot of rewinding of scenes just to make sense out of everything. The added attention is  warranted. Those who stick it out the entire two and a half will be richly rewarded with an engrossing film experience with some unexpectedly rich performances by some big name actors playing against type.

Folks will either love "Inherent Vice" or hate it. It could be a complete flop at the boix office or become a cult classic. Its Paul Thomas Anderson walking to the edge of a cinematic cliff with no indication that he's wearing a parachute of one of those body-winged suits.  The film and its music score, successfully evokes the time period with early reference to Charles Manson and the Tate-LasBianca slayings and the free-love and drug culture of the time.

The title, "Inherent Vice" is based on a concept of maritime law in which a good or property has within itself a hidden defect that will be the cause of its deterioration, damage or wastage. In the case of a ship carrying dangerous cargo such as explosives or corrosive or hazardous materials, if the carrier or the insurer have not been warned of the derfect, neither is liable for any klegal claim against them. With that information firmly in mind, now, on to our story.

The film follows the misadventures of Doc Sportello (Joaquin Phoenix), a mostly out of work private detective who spends most of his time getting stoned in his tiny, junky house. He makes a vague stab at solving the few cases he's hired to investigate by writing inscrutible notes in a tiny notepad. He's sort of a stoner's version of Columbo. His ex-Shasta (the up-and-coming British-born American actrss who is the daughter of Oscar-nominated actor Sam Waterston and former model Lynn Woodruff, ina role that could prepel her into prominence), tracks him down. She tells him she's involved in an affair with an older, married real estate mogul, Mickey Wolfmann (Eric Roberts). She wants him to stoiop a plot by Wolfmann's wife Sloane (Serena Scott Thomas),  and her lover to have Wolfmann committed to a mental institution.


Along the way, Doc gets implicated in a murder, gets caught up in a manhunt involving the Aryan Nation, crosses paths with a take-no-prisoner law and order Detective named Christian "Big Foot" Bjornsen (Josh Brolin), and is side-tracked by dealings with an in-love-with-the-sound-of-his-voice dentist (Martin Short), who loves to get high in his office. There are some terrific cameos by some terrific actors playing against type throughout.
The plot twists are too exhaustive to run through in a single review. Suffice it to say that Joaquin Phoenix, in his engaging, loopy style, does a masterful job of holding it all together, while director Anderson shows off his skill at weaving an otherwise incomprehensible tangle of a story into a near masterpiece.

Posted by Dwight the Connoisseur at 12:02 PM