NEW YORK---"Stray Dogs", a documentary which opened 4th of July Weekend at the Elinor Bunin Munroe Film Center at Lincoln Center, is a patiently probing look at the tortured life of returning war veterans through the eyes of Ron "Stray Dog" Hall, a sixty-something Vietnam vet who runs a trailer park, collects 'found' puppies and tries desperately to reincorporate himself into an American society that he fought so hard to preserve, but now seems foreign and benign to him. Haunted by the demons fostered by the horrors of war, this first-time documentary by filmmaker Debra Granik takes its time drawing you into Hall's day-to-day life, experiencing the emotional and physical hurdles that he and his fellow veterans face as he seeks a bit of solace on the open road, chain-smoking, drinking moonshine and riding his Harley with his biker buddies. Along the way, they lend a helping hand and a sympathetic shoulder to fellow veterans and the survivors of those lost to combat. If you've ever seen these roving bands of hog-riding vets on the highways, after seeing "Stray Dogs," you will no longer simply ignore them as part of the noisy wallpaper of American life.

We first encounter Hall drinking moonshine with his buddies n the trailer park which he manages. The trappings of the biker life are everywhere, leather jackets with patches galore, guns and  Harleys everywhere. It's the typical biker's haven. Then, the tone starts to change. We see him  break down in tears in a session with his therapist as he recounts the emotional shrapnel imbedded in his mind from the war and later, at a military funeral for a fellow comrade-in-arms that he doesn't even know. The next scenes peel back the layers of an even more complex personality, he's trying to learn Spanish through online lessons on his computer, so that he can better communicate with his new wife, Alicia, a Mexican immigrant, and her two sons, whom he regularly speaks with via Skype in their home in Mexico. Alicia desperately wants to reunite with them and Hall has dreams of retiring in Mexico with his new family.


Hall and his compatriots meld themselves into a rag-tag support group for other vets and their families, traveling the roads on their Harleys, attending funerals, providing ad hoc counseling for similarly troubled vets and lending a helping hand or two to bereaved families of fallen vets and a shoulder to cry on. Lest you think they are a racially biased group, one of the most moving scenes in the film is one in which they visit a black woman who lost both a daughter and a grandson to separate conflicts, in which they minister to her, both directing her to counseling and praying fervently with her. They later return to her home to replace her kitchen floor, which was damaged by a broken water heater. There wasn't a dry eye in the house after that scene.


At times, the film seems to drag, but your mind doesn't wander for a moment. There's so much humanity in it. It cuts through all of the layers of artifice and stereotype to reveal the bleeding soul beneath all the biker regalia to reveal a human being who has been left stranded on the roadside of a country which should be embracing he and his kind for their tremendous bravery and sacrifice. One scene that brings it all home is an encounter with one of Hall's friends who finds out that his VA health insurance won't quite cover the cost of the dental work he needs to get new teeth in order to eat properly. We see him standing at the bathroom mirror, painfully extracting his own wisdom teeth in order to save the cost of a $300 dental bill. If that doesn't make you rail against the current treatment of our veterans, nothing will.


"Stray Dog" is a must see film for anyone who considers themselves a patriotic American. It should not only inspire one to raise a salute the next time you see a band of roving biker vets go by, but to lend a helping hand to those who live in the shadows of your own community. 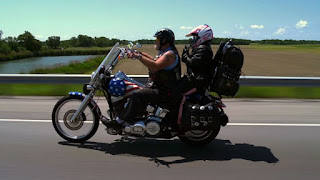 Posted by Dwight the Connoisseur at 5:56 AM