An explicit and unconstrained look at the red hot topic of underage romance with older men, but with a twist 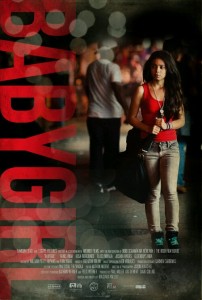 BABY GIRL approaches the issue of underage girls involved in romances with older men in a very unique way, from the perspective of a love triangle involving a 16 year old girl, her mother, and a conniving shyster who starts out as the mother's suitor.  Starring up-an-comer Yainis Ynoa (Starz hot prime-time drama POWER), as the impetuous, scheming daughter Lena, the film unfolds innocently enough, with man-crazy mother Lucy (Rosa Arrendondo), who has a penchant for dating losers, meeting a flirtatious, good-looking 26 year old Lothario, Victor (a slick, fast-talking Flaco Navaja, in an electrifying performance), while riding the bus through the Bronx.

The film, by Irish-born director Macdara Vallely is surprisingly spot-on its its vivid portrayal of Puerto Rican-Americn culture as its realized in the Bronx. The film makes stunning use of the realistic locales; the streets, parks, playgrounds, bodegas and dingy apartments that are the milieu of BABY GIRL. Production Designer Carmen Cardenas uses the streets of New York to great advantage, making the streetscapes and its habitués a part of the story. Its rare that a reviewer sites a Location Manager, in this case, Rolando Hudson, but all praise is due for scouting locations that serve as much to tell the story as the script, cinematography ( by Director of Photography Jarin Blaschke), which is superb,  and the acting, also outstanding and realistic.

One notable, comic-relief character is that of Mr. Krugman, played by Charles Techman. He's Xavier's regular pizza customer, who lives in a drab walkup. The only bright spot in his day seems to be his daily delivery from Xavier. When the boy shows up with Lena in town, Krugman  comes to the door in shabby shorts and declares, "If I'd known you were bringing company, I'd have worn my pants!"

The score, composed by Brendan Dolan, also serves the plot effectively as do the songs, in Spanish, primarily composed and sung in large part by Rebio Diaz and Jose Conde, among others.  Whether you like Spanish music or not,  it's a killer soundtrack, well worth downloading! 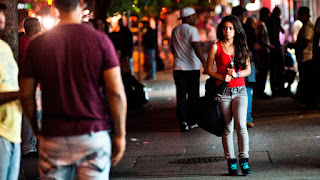 Victor and Momma Lucy hit it off right away, much to the chagrin of budding-into-womanhood daughter Lena. Victor, with all his fast talk and fresh-out-of-prison tattoos is all wrong for Momma, in Lena's estimation , and, since she seems to have fallen into the cross-hairs of his roving eye, she decides to use her nascent feminine whiles to whoo him. The goal is  to prove to her mother what a creep Victor really is.

The scheme backfires, of course.  Rather than earning her mother's gratitude, she instead finds herself thrown out on the street and her mother desperately trying to repair the broken relationship with Victor.

Along the course of their reunion, there are telltale signs that things aren't going to work out, but Lucy wipes away the obvious mess and blindly plunges on, while her daughter looks on with growing disdain for both her mother and Victor.

Lena has remorse over her scheme, no matter how noble her intentions. She has a nightmare that she is confessing her affair with Victor on a Spanish-language Maury Povich/Jerry Springer-type show called Claudia (Karina Casiano).

In between the plot points of this all-to-brief film (only 77 minutes), there's a squeamishly uncomfortable examination of the sexually-charged, headlong relationship between Lena and Victor. Victor thinks its all for real, and for just a moment, Lena too seems caught in the vortex of the untangling web of deception that she has so carefully woven.

It's a terrific film, with an uncanny feeling for time, place and character. It's even more so remarkable that the film is almost wholly an Irish endeavor, from the Irish Film Board and Samson Films of Dublin.

Directed by Macdara Vallely, who is also the screenwriter. The film takes great care to depict the intimate details of Puerto Rican-American life and culture.  A central plot-point, and the film's key scene in the early story construction, is a Sweet 16 birthday party for Lena in a local New York Park. We see the extended family and friends mixing and unique celebratory nature of the event. which is a Spanish female coming of age.

The script takes great care to highlight its importance, with the mother explaining to the gathering that the normal 'coming out, should have been in the previous year, when Lena was 15,  known as Quinceanera (15th birthday celebration), or  "Quinces." Lucy says tearfully to the gathering, "We couldn't celebrate Quinceanera last year because of a lot of personal things in our family." Lucy goes on to say, with uncanny prescience; "My Baby Girl is a full grown woman....My Lena has been more than my daughter, she's been by best friend"....words she will later regret.

The term "Baby Girl," is one of those terms used frequently in the 'hood, that can cut both ways.  It can be a pet name in one sense, and a form of derision in another context. We hear it used both ways in this film, first as a term of endearment by her mother and later, as a form of derision by her closest friend. "You too uptight, Baby Girl! You need to get yourself 'some' (sex)!" Carmen says.

Along the way, there's a playful flirtation and a tugging interest toward Xavier (Joshua Rivera), a smart-alecky charmer, with a quick wit. He's the local pizza delivery boy who has an eye for Lena. He keeps hot on her tail, even in the midst of her messy love triangle. They're first encounter is a 'meet cute.' After initially rebuffing Xavier's advances on the playground, she is forced to acknowledge him when he pays the fifty cents she doesn't have to the local slushee vendor, so she can get some ice for her mother's rum cocktail (out of pint bottle, no less. How tacky,  Urban and Ghetto!) on a hot day in the park.

Another standout performer is Sandra Rodriguez as Lena's best friend, Carmen, another smart mouth who observes "You ought to hook up with Xavier. I hear he's from the same state you're from...."Virgin....ia."  Clever!

For someone who is not American, much less from the Bronx, director/screenwriter Vallely displays an uncanny aptitude for picking up the lingua franca of the characters, and their frequent ventures into double entendre. One fact that I found particularly fascinating, is how Vallely, in writing the script, portrayed how fluidly American Hispanics slip between English and Spanish  in the coarse of normal conversation. It's a trait I've noticed from living  lengthy periods of time in South Beach, Miami, which is, with the exception of the tourist strip on Ocean and Collins Avenues, almost totally Hispanic.

The dialogue bristles throughout, alternately heightening the drama  and lending an air of humor.

When Lena comes on to Victor with a proposition to get together behind her mother's back, Victor says to her, "I know you feel something for me," Lena responds in a rueful tone of voice, "I do feel something for you Victor." To anyone but clueless Victor, the word "contempt" is the missing word that's almost understood in the sentence.

Baby Girl had its World Premiere at last spring's Tribeca Film Festival and is finally reaching a wider audience this summer. Its available beginning Tuesday, August 25th on iTunes and most Video On Demand (VOD) platforms. I'd recommend it highly.

BABY GIRL
a film from the Irish Film Board and
SAMSON FILMS
In English and Spanish
USA, Ireland
77 minutes