Award-winning documentary tests the boundaries of human endurance and filmmaking 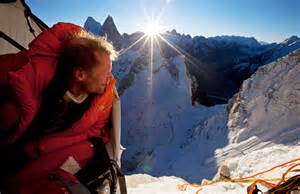 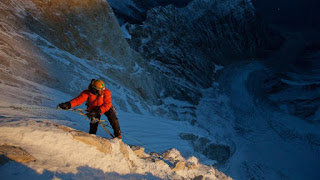 NEW YORK--MERU, the Sundance Film Festival Audience Award winner for U.S. Documentary, is the most adranelin pumping film you will ever see. It is terrifying in its nail-biting reality because you are constantly aware of the clear and present danger of the dare-devil climbers who are also, incidentally, the filmmakers and cinematographers . They accomplished the mind boggling feat of scaling the world's most dangerous peak while narcissistically filming the hair-raising adventure every grueling inch of the way.

Filming itself was a feat within itself. "We had to alternate film each other. One person would climb as the other shot with the camera," explained Anker in a post-clim interview. "That meant we had to take off the glove on one hand, and be sure not to drop it, because if you lost the glove, you'd subsequently lose your hand! You have to understand that our hands were freezing and we'd have to change out the memory cards on our miniature cameras in freezing cold and high wind without dropping anything.
One false move and you could not only lose a camera. You could die!"

Produced and directed by the the husband and wife team of Jimmy Chin and Elizabeth Chai Vasarhelyi, the film is the first-person account of filmmaker Chin and fellow elite climbers Conrad Anker and Renan Ozturk. The fact that the three survived to film and tell the tale is a feat in itself. Even if the outcome is telegraphed by the fact that all three climbers contributed on-camera interviews well after the climb, its guaranteed that noone will take a potty break or rush out for popcorn during the 90 minute duration. It's pretty much a white-knuckle ride all the way from beginning to end. Stick that in your Mission Impossible pipe and smoke it! 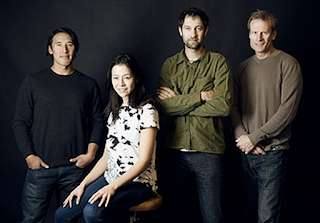 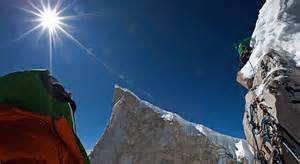 MERU is the real deal, with no trick cover shots, stunt men or CG effects. This U.S.-India production from Music Box Films premiered August 14th weekend at New York's Lincoln Plaza Cinemas and the Angelika Film Center and in Los Angeles at the Landmark Nuart. A national rollout follows.

MERU is no glorified wall-climbing experience. Sitting 21,000 feet above Northern India's mystical  Ganges River, it is awe-inspiring.  Known as Shark's Fin, it is a sheer  face of slick ice and granite that sits majestically against the sub stratospheric sky, both beckoning and daring the adventurous.

Others have tried and failed, Many were sent to their deaths. In fact, Aker himself had attempted a climb in 2003 and was forced back by severe storms. Undeterred, he returned in 2008 at the behest of Chin and Ozturk, and the rest is now cinematic and mountain-climbing history.

Besides the heart-stopping adventure, the film goes behind the scenes to reveal the tremendous personal toll on family and relationships that the climb exacts. The film also celebrates the true bonds of friendship and loyalty, especially when the chips are down. There are many who perished in the pursuit of Meru, including the mentors of the climbers in this film. In many ways, this film is a tribute to their lives and their heroic effort.

I really don't want to ruin the sheer thrill of watching this film by telling you too much about it. If its not playing in your home theatres now, just be patient, it will head your way soon. It's just too good to linger on a few screens for very long. Showtime is also planning to air it in the near future.

Its guaranteed that your view of life and its challenges will change after seeing this film. The film proves that all things are possible, even against the greatest of odds.


Posted by Dwight the Connoisseur at 3:31 PM