MAESTRO JAMES LEVINE AND A STELLAR CHORUS, SETS AND COSTUMES CREATE MOST COMPELLING PRODUCTION OF THE SEASON 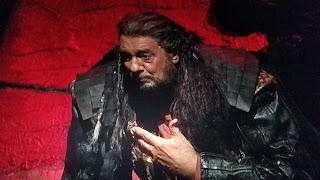 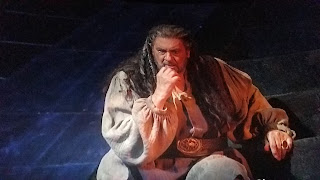 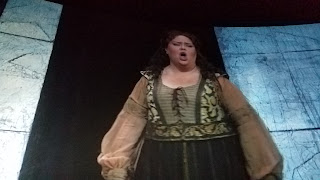 NEW YORK--The Biblical story of Nebuchadnezzar, the Babyloanian tyrant King who turned from his pagan idol to the God of Jehovah after a devastating turn of events,in which his throne was in jeopardy, and returned the Hebrews to their homeland in Jerusalem, is one of history's most compelling sagas. Giuseppe Verdi turned the story into his first operatic hit. Metropolitan Opera's production, which was presented Live in HD for its final season performance, was a fitting highlight to the 2016-17 season, which marks the 50th anniversary year of the Met, and more than 40 years of outstanding service by its star, the remarkably nimble 76 year old Placid Domingo, this time performing as a baritone in the named title role and the indefatigable James Levine, the Mets Music Director, and the opera's conductor.

The chorus, conducted by Chorus Master Donald Palumbo, was the first to take a well deserved curtain call. They were an integral part of the opera and sang magnificently in concert with the leads throughout. Their costumes and makeup were expertly applied and were especially impressive in the beautiful Va Pensiero chorus, in which the Hebrew slaves lamented their plight and expressed their desire to return to their homeland in Jerusalem. Met Live HD director Barbara Willis Sweete's cameras were used to their best advantage as they honed in on extreme closeups of the impassioned faces of the chorus members. Particularly poignant were the shots of conductor James Levine at the podium as he conducted the passage in a state of rapture.It brought an emotional tear to his eye after the first of two thundering ovations.

Domingo was at the top of his form as the war weary Nabucco. Faced with the possible execution of his daughter and the loss of his throne, he is brought to his knees and, lying prostrate, pledged to turn from his pagan god to the One True God and to change his tyrannical ways. Previously, the character Nabucco, had gone temporarily mad and wandered in the woods. Domingo proved quite nimble in spite of his 76 years, getting down on all fours and groveling while singing in character, no mean feat at any age.

Domingo began his early career as a baritone, but earned stardom as a tenor. You might recall him as part of the wildly popular international sensation singing team of the 1990s, The Three Tenors consisting of himself, the late, great Luciano Pavarotti and fellow Spaniard José Carreras. They are credited with bringing opera to a wider audience. That audience was certainly evident for all of Domingo's live performances at the Met, which were completely sold out. Perhaps the best opportunity to see Nabucco, even for New Yorkers, is at movie theatres this week. A Met Live HD Encore performance presents this Wednesday, January 11 at 6:30pm local time. Check your local listings for theatre locations.

All of the principals were in excellent voice and dramatic form. Liudmyla Monastyrska was chilling in the the tour-de-force role of Abigaille, Nabucco’s willful daughter. Jamie Barton was a silvery voiced Fennena.  Bass Dmitry Beloselsky  was also a commanding presence as Zaccaria.

Diversity was also well in evidence for this outstanding production. Eric Owens, the Mets esteemed bass/baritone who stars in the this season's production of Kasija Saariaho's L'Amour de Loin,  serves as the knowledgable Live HD announced and backstage interviewer. His easy manner, familiarity with the material and friendly relationship with the performers was evident in his insightful interviews. Tenor Russell Thomas also reprised his Met Opera 2011 debut role of Ismaelle, with masterful effect.

NEXT MET LIVE HD: The broadcast of Gounod's Roméo et Juliette will be presented live in select cinemas nationwide on Saturday, January 21 at 12:55 p.m. ET / 9:55 a.m. PT, followed by an encore presentation in select cinemas on Wednesday, January 25 at 6:30 p.m. local time.
The electrifying team of Vittorio Grigolo and Diana Damrau reunites for a new production of Gounod's opera based on the Shakespeare play. Damrau makes her role debut as Juliette in Bartlett Sher's new productioN. For more information, visit metopera.org or fathom events.com. 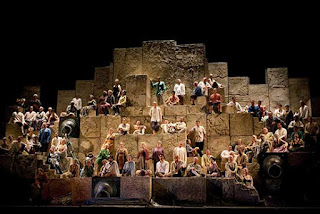 Posted by Dwight the Connoisseur at 1:46 PM