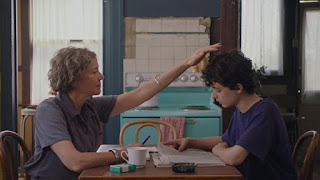 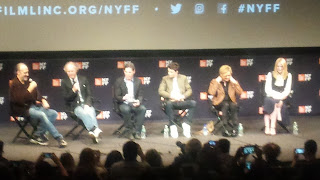 NEW YORK--20th Century Women is director Mike Mill's third feature film, and like his previous film, "Beginner's," which earned an Oscar and a Golden Globe for its star, Christopher Plummer,  it is highly personal and autobiographical. The film is already generating Oscar buzz, particularly for its star, Annette Benning, as Dorothea Fields, a chain-smoking, free-spirited single mom in 1979 Santa Barbara, who enlists the aid of a a pair of forward thinking women,  her tenant, Abbie (Greta Gerwig), a  24 year old photographer, who documents everything, including the mundane posters in her son's room,  and her neighbor, Julie (Elle Fanning), a 17 year old who enjoys a cozy, platonic relationship with her moody, punk music obsessed 15 year old son, Jamie (played with disarming charm and candor  by Chicago-area actor Lucas Jade Zumann).

A brilliant ensemble cast, a killer sound track and a story line that Mills says is based on his experience growing up with his own mother, makes this an engrossing film that, in many ways, is a spot on portrayal of a set of characters in a specific place and time period . Its also a beautifully crafted example of a master filmmaker and storyteller at work.

Posted by Dwight the Connoisseur at 11:31 AM