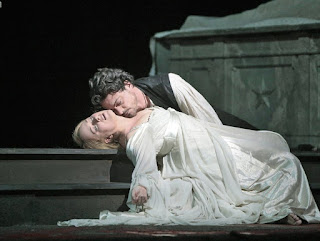 Vittorio Grigolo and Diana Damrau as Romeo and Juliette 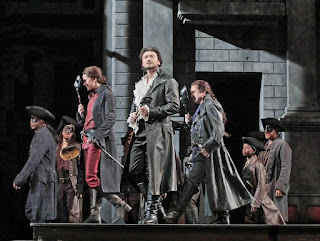 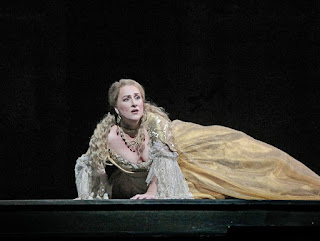 This Wednesday, January 25 at 6:30pm local time in theaters around the world, opera lovers will have an opportunity to witness one of the most sizzling pairings of onstage lovers in recent memory in Bartlett Sher's dramatic production of Charles Gounod's Romeo Et Juliette (Romeo and Juliet), starring soprano Diana Damrau as Juliette and tenor Vittorio Grigolo as Romeo.

The feud between the Capulets and the Montagues in 18th century Verona takes on new flesh and blood in Sher's staging. "I tried to capture, not so much the exact time and place, but the feeling of a city, any city, with its tensions and feelings," Sher told Live In HD Host Ailyn Perez. " I wanted to convey the sense that this story could happen at any time, in any place."

Mission accomplished. The casting of Grigolo and Damrau as the hapless lovers is spot on. Both bring a visceral energy and stupendous vocal power and dramatic conviction to their performances. The chemistry between the two is electrifying. In closeup scenes, captured beautifully by veteran Live HD Director Gary Halvorson. The staging and choreography, which included some sultry and expressive dance scenes from Choreographer Chase Brock, served to heighten the sense of drama. The fight scene, orchestrated by Fight Director B.H. Barry, at the beginning of Act III, is among the most convincing presented on an operatic stage. The scene where Romeo stands over the body of the fallen Mercurio (Elliot Madore), is filled with pathos. The death scene at the Capulet's crypt is particularly moving, with brilliant singing from the principals. If you've already scene this production at the Met or at the Saturday, January 21 Met Live HD showing, it might not be a bad idea to take another opportunity to see one of the finest performances of the season. Encore Presentation, Wednesday, Jan.21 6:30pm local time. Next Met Live HD performance, Saturday, February 25 12:55pm. Kristine Opolaise stars in Antonin Dvorak's Rusalka.

Posted by Dwight the Connoisseur at 5:27 AM