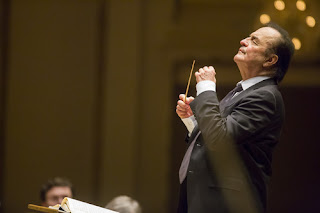 Maestro Charles Dutoit at the podium with the Chicago Symphony Orchestra

There could not have been a more perfect Easter Weekend program than that which was presented by the Chicago Symphony Orchestra with the esteemed conductor Charles Dutoit at the podium with the superb Chicago Symphony Chorus under the direction of Duain Wolfe. Wagner's Good Friday Music from Parsifal brought forth a finely crafted reading of Wagner's superlative music that charts the emotive spirit al journey of a young knight grown to maturity in his search for the Holy Grail. The more restless and war-torn Symphony No. 3 (Liturgique) from 20th century French composer Arthur Honegger seemed stripped right from the weekend's headlines, with North Korea's threatened nuclear tests and the possibility of war-like retaliation from the U.S. and the barely settled fu mes of U.S. bombs over Syria still lingering in the air. Dutoit's handling of this  epic piece was a testament to his use of restraint in building tension through use of tonal color and texture to create a heightened sense of drama. The long, slow second movement, De proudness clamavi: Adagio, became the central heartbeat of this absorbing piece and set the stage for the finale, which begins with the unrelenting march of war and ends in a peaceful benediction.This was Charles Dutoit and the CSO at their best with their masterful display of contrast.

Faure's Requiem, Op. 48 was the crowning moment of this stellar concert. Rather than building to a bombastic revelation as so many compositions dedicated to Passion of Christ, Faure's Requien is introspective and serene. This could not have more suited the superior talents of Maestro Dutoit and the collective forces of the CSO and the Chicago Symphony Chorus, expertly prepared by Chorus Director Duain Wolfe and soioists soprano Chen Reiss in her Chicago Symphony debut, and baritone Matthias Goerne, one of the world's most sought-after vocalists. This was a sublime performance that brought the message of Resurrection to the fore in understated, but definitive fashion. Dutoit used sweeping motions from his supple hands to shape the full, rounded tones that emanated from both the chorus and orchestra. Faure began his musical career in the organ loft, and that instrument was used to great effect as the tonal and emotional underpinning of this sublime music. This was a true Requiem in every way, reflecting  both the gravity of the experience and  sustaining hope. April 20-23, the distinguished conductor Neeme Jarvi conducts the CSO in Bartok's Violin Concerto performed by CSO Concertmaster Robert Chen and Beethoven's Pastoral Symphony. Visit cso.org for tickets and information.


Posted by Dwight the Connoisseur at 2:46 PM