Story and photos by Dwight Casimere 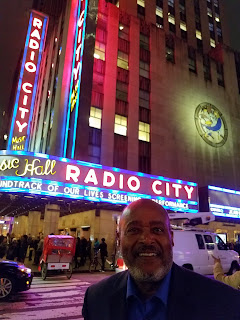 NEW YORK--From the literal ashes of  the holocaust of 9-11, the Tribeca Film Festival has risen  to become one of the largest and most influential in the world. That fact was brought home with resounding resonance as the biggest stars on the planet took the stage at Radio City Music Hall to pay tribute to the festival overall, and in particular to legendary music impresario Clive Davis and the World Premiere of director Chris Perkel's documentary film "Clive Davis: The Soundtrack of Our Lives" which details Davis's illustrious fifty year career. 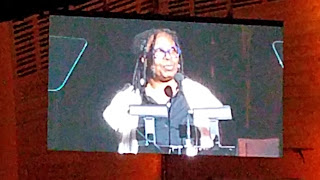 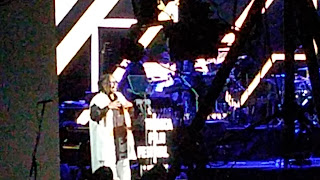 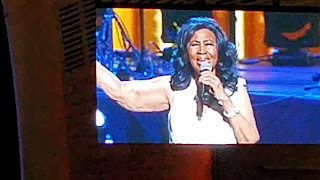 Aretha rocked out with a medley of her iconic hits 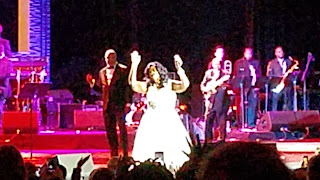 Tribeca Film Festival Co-Founders Robert DeNiro and Jane Rosenthal  opened the night's festivities with a back-handed swipe at the current administration, with DeNiro quipping that that the night's all-star lineup of Barry Manilow, Jennifer Hudson, Earth Wind and Fire, Dionne Warwick, Carly Simon and Aretha Franklin, were all there "fresh from not performing at the inauguration."  Emcee Whoopi Goldberg further kept a tongue-in-cheek lid on the political side-swipes by making a pitch for not defunding arts and culture in public education, ending by saying, "and that's about all I'll have to say about politics tonight."

Clive Davis called the evening "a dream come true. "I was born in Brooklyn and didn't arrive in New York until I was 13, when I went to Radio City Music Hall for a friend's birthday." He said the experience of having a documentary film on his life open at the venue "is incredibly special." Davis went on to decry the slashes in funding for the arts due to budget cuts to the National Endowment for the Arts. He called the cuts "very disappointing."

The show was curated by Tribeca c0-founder Robert DeNiro, who personally invited each of the performers. None turned him down. Aretha Franklin, who excused any imperfections in her performance due to a recent fight with a lingering upper respiratory perfection, added,   "I may miss a few notes, but I would not have missed this night, no matter what. Clive Davis in not only the chieftain who sits in his office taking care of his business, he also takes care of his artists. He is a great record man and a great humanitarian." 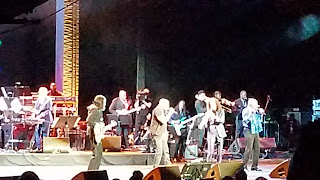 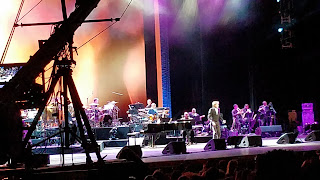 Barry Manilow was the epitome of showmanship

Clive Davis: The Soundtrack of Our Lives" tracks Davi's fifty-year career from his discovery of Janis Joplin at the Monterey Pop Festival in 1967, through the many careers and lives he launched and transformed through the decades; there are interviews, archival photos, performance videos and behind-the-scenes footage detailing his relationship with some of the biggest names in 20th and 21st century music; "The Boss" Bruce Springsteen, Barry Manilow, who opened the live concert portion of the show with an explosive performance, a video clip from a surprisingly absent Alicia Keyes, P-Diddy and ending with an emotional tribute to and on-camera performance  from perhaps his greatest discovery, Whitney Houston.
There were even a few surprises along the way; a rare shot of smiling Miles Davis, somewhere backstage with Clive and company, and the little-known factoid that Davis often sits alone in his office, late at night, strumming a guitar for relaxation and solace from his self-imposed rigorous routine.

The post-film performance was dazzling, as could be expected with such a powerhouse lineup. "Mr. Showmanship" Barry Manilow opened without introduction, with an orchestra that completely filled the massive Radio City stage, romping through a hand-clapping, foot-stomping medley of his many hits, and ending with a dancing-in-the-aisles sing-along of his iconic "Copa Cabana."  Things settled down with a touching, Gospel-tinged tribute to Whitney by Oscar and Grammy winner Jennifer Hudson, which concluded a vocally superior rendition of a medley of Houston hits. Hudson then surprised everyone by plunging into the audience,  singing to a delighted Davis and then dancing and singing down the aisle to the delight of the audience, which had already risen to their feet.

Kenny G led a storm-trooping Earth Wind and Fire onstage with a blistering glissando of jazz-tinged riffs that made it clear that neither the group nor Kenny has lost their edge.

Dionne Warwick earned the most glowing introduction from Whoopi, who also indulged in some self-deprecating humor . Commenting on the current trend where the stars now reveal all at the drop of a hat via instagram and the rest of the internet, "Nobody asked me to show it all lately. That's because everything is dragging to the floor." Someone from the audience good-naturedly yelled "Take it off!" That brought down the house.

Times may have put a crimp or two on the edge of Dionne Warwick's velvety tones, but there was no mistaking the heartfelt message of her hit "That's What Friends Are For," which she made a point of directing toward the honoree, sitting with an expression of adoration on his face in the front row.

Carly Simon romped through a brief medley of her early hits before bringing onstage a delightful chorus of children, who did backup vocals and hand choreography to The Itsy Bitsy Spider, which was interwoven with one of Simon's own compositions. It was a light-hearted, yet poignant moment that really connected with the audience. To whoever produced the show; Nice Touch!

Below: Just a few of the "Beautiful People" in t he audience at the Clive Davis tribute 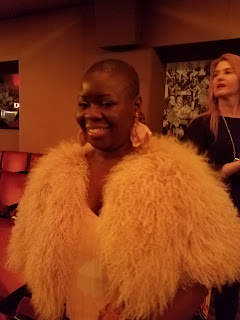 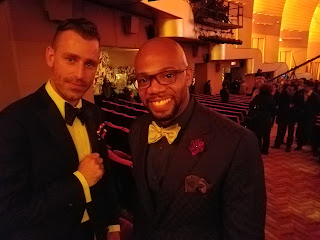 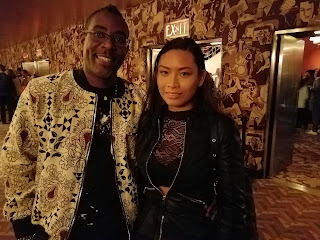 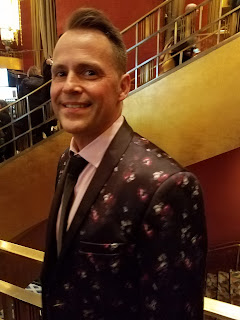 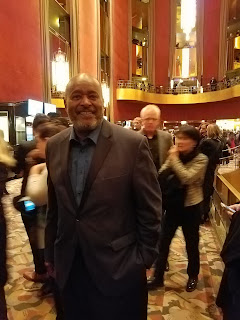 There were no quips and very little in the way of introduction from Whoopi when she brought on the evening's finale. "She is the very meaning of the word icon. There isn't a day that goes by that someone, somewhere isn't singing one of her songs." Aretha proceeded to rock the house with a medley of her hits, looking stunning in an evening gown  that showed of her much-slimmed-down physique. Her voice seemed to show no effect of the previously mentioned malady. In fact, after her touching comments directed at the honoree, which briefly started to echo  her father, the great preacher, the Rev. C.L. Franklin,  she was literally dancing across th e stage, Holy Roller-style, which brought the audience to a standing ovation. I was seated next to a rather large boom camera with a very animated director talking to cameramen positioned both onstage and in the audience, filming all the action up front and personal, so, no doubt, there's a tv special or performance film in the offing. If so, its well worth waiting for, because this was the show of a lifetime.

Posted by Dwight the Connoisseur at 8:26 AM