New York---When Joffrey Ballet Founders Robert Joffrey and Gerald Arpino uprooted the company  to move to Chicago in 1995, it was amidst dwindling audiences and shrinking economic support.

In 1995, the nation was in the midst of a cultural and social paradigm shift. The OJ Simpson trial dominated the networks, perhaps the country's first reality TV show, Windows 95 and the video game DOOM became the most downloaded software on home computers, and people were hooking up on MATCH.com, in record numbers, ushering in the age of dating-by-computer and the new age of online communication and personal absorption.

All that murky past vanished in an instant when the Joffrey, presented by the Joyce Theater Foundation, the international leader in dance presentation, took the stage at Lincoln Center's Koch Theater in Polish choreographer Krzysztof Pastor's splashy reimagining of Shakespeare's classic tale, Romeo and Julie.

The company mounted the stage in edgy modern dress, with sets and costumes by Tatyana Van Walsum, and dramatic lighting  by Bert Dalhuysen, recreated by Jack Mehler, complete with a backdrop of projected video images, depicting three significant periods in 20th century Italian political history; the rigid repression of the Mussolini reign of the 1930s, the Vespa-happy times of the '50s, and the corruption-riddled Borlusconi '90s.

Much of the Italian political references are probably lost on American audiences, but there's no mistaking the explosive energy of the Joffrey's dancers on stage, doing what they do best. Principal dancers Rory Hohenstein, as Romeo, and the meltingly charming Christine Rocas as Juliet, provided the dramatic core of this stirring presentation. It helps that the two are an actual romantic couple offstage as well, and the electricity between them came through on stage.

Among the highlights was the face-off between the Montagues and the Capulets, with Yoshihisa Arai as a taunting Mercutio and Temur Suluashvili as the threatening Tybalt.  Their in-your-face tuanting at times brought laughter from the audience.

Fabrice Calmels was a towering, majestic Capulet.  The company dancers, as the Montagues and Capulets and Soldiers, and various members of the Joffrey Studio Company and Joffrey Academy as Townspeople, added appropriate energy and atmosphere to the overall  fine effort.

This Romeo and Juliet had its World Premiere in 2008 with the Scottish Ballet at the Edinburgh Festival and was preimered by the Joffrey Ballet at Chicago's Auditorium Chicago at Roosevelt University on Congress in 2014. It hasn't lost any of its luster and social relevance amidst the accelerated events of recent times.

The Joffrey Ballet has done well since its move to Chicago in 1995. It has built a towering headquarters on Chicago's famed State Street, just a stone's throw from the landmark Chicago Theater, with rehearsal studios and class sessions visible from the street below. Its impressive brightly lit signage is visible for blocks, symbolic of the company's preeminence .

In its return to New York, March 29-April 2,  the Joffrey left behind a glittering and lasting impression, befitting  its standing as one of the world's premiere dance companies. 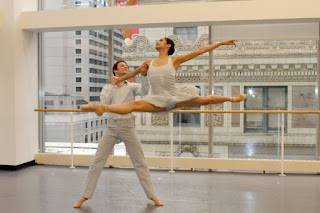 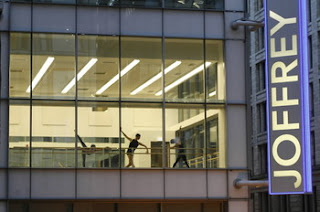 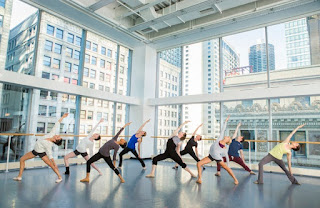 Posted by Dwight the Connoisseur at 8:48 AM