GOODMAN THEATRE HAVING OUR SAY: THE DELANY SISTERS' FIRST 100 YEARS NOW THRU JUNE 10 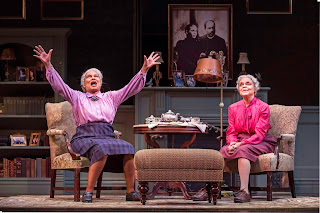 Goodman Theatre veteran Resident Director Chuck Smith's revival of Emily Mann's Having Our Say: The Delany Sisters' First 100 Years, is the triumph of the Chicago theatrical season. The play, starring Ella Joyce (Goodman's Jeff Award-winning Crumbs from the Table of Joy) as Bessie. and Marie Thomas (Broadway's Don't Bother Me I Can't Cope, TVs L.A.Law, Amen, Knots Landing) as Sadie, is an historical time-travelogue, narrated by the two sisters who speak to the audience from a  magical set by 30 year Goodman veteran Set Designer Linda Buchanan. It recreates the living room and kitchen of the Delaney's Mount Vernon, N.Y. home. The back story of how they managed to purchase the home in 1957 in the then-segregated lily-white suburb is one of the play's many  narrational gems. Goodman's veteran Costume Designer Birgit Rattenborg Wise also deserves praise for her spot-on designs as does the creative work of Lighting Designer John Culbert and Sound Designer Ray Nardelli. The artful use of historic photographs projected on screens above and around the stage, by Projection Designer Mike Tutaj, further enhances and advances the story-telling.

The history books don't really tell you a lot about what life was really like for blacks who lived in the south in the years after the Civil War and the end of slavery and about the early years of the black migration to the north's urban centers. We hear the names of W.E.B. Du Bois, Bookler T. Washington, Mary McCleod Bethune, and others, but the Delany sister's acccount, as authored by Amy Hill Hearth, who did the original article on the Delany sisters in the New York Times in 1991 and co-authored the subsequent book which became the foundation for Emily Mann's stage adaptation, gives verbal flesh and blood and a vivid pictorial image of those turbulent years. In those times, America saw the emergence of the black middle class and the resulting backlash of Jim Crow.

This year marks the 25th anniversary of the publication of the Delany's New York Times bestselling memoir, and as co-author Hearth and playwright Mann have pointed out in numerous interviews, its a pity how little has changed in terms of race relations. Particularly striking is the fact that Bessie and Sadie, were the daughters of a father who was raised as a slave, and a mixed-racial mother who was the daughter of a free African American woman, and a father who was a white Virginia farmer. The two lived a common-law marriage in separate houses for fifty years because mixed-racial marriages were outlawed in the entire country.

The Delany sisters lived a privileged life as children, even by today's standards. Although they grew up in North Caroline, they were raised on the campus of St. Augustine's College in Raleigh, North Carolina where their father, the first African American Episcopal bishop, was the vice principal and their mother worked as a matron. The  sisters then moved to New York as young adults to pursue higher education and careers; Bessie to become only the second black woman to become licensed to practice dentistry in New York City, and Sadie to become a school teacher, the first to be certified to teach high school-level domestic science (at a white school, no less) also in New York City.

Their story of the impact of Jim Crow laws, which began in their home state of North Carolina when the girls were grade school aged, is particularly telling and frightening. Seen from a child's perspective, the two relate how they were suddenly ordered to the back of the streetcar that they rode regularly while sitting in the front ("so the breeze could catch Sadie's long hair!", and forced to drink from a separate drinking fountain at the park they frequented as children on family outings without any prior restriction. Sadie's recounting of her childish act of defiance (I'm gonna drink me some of that white water!) is one of the play's funniest, yet saddening, moments.

Their narrative also depicts the dawning of the segregation movement, which spread like wildfire, particularly with the premiere of the film Birth of A Nation (Originally titled The Clansman) by D.W. Griffith and starring Lillian Gish in 1915. The film fanned the flames of racism and brazenly displayed beatings, lynching and untold brutalities against blacks, which fomented similar acts around the country. W.E.B. Du Bois and the NAACP mounted protests at the films' premiere and sparked a national movement against Jim Crow laws and lynching. The sisters had their own tale of Bessie's brush with a lynch mob, while she was traveling North to attend college. The story is conversely funny and chilling.

The Delany sisters recount their stories with a great deal of pride and joy, proudly presenting family sepia-toned photos from a tattered family album, brandishing them as if they were priceless historic objects, which are artfully reproduced in overhead screen projections.The photos act as footnotes to their stories of racial pride and prejudice.

Its amazing how thoroughly actors Joyce and Thomas inhabit the personas of the Delany sisters. They literally become submerged in their characters. I found myself reflecting on my own late mother and aunt who, in their later years, lived as an inseparable couple, much like the Delany sisters.

During the two-hour performance, with one intermssion, the audience feels as if they are actually sitting in that house with them as they sip tea and prepare a celebratory meal in honor of their revered father's birthday. Just rattling off the menu of sweet potatoes, macaroni and cheese, pound cake and other soul food delicacies is enough to make your mouth water, just as the sister's at times loving and at others, heartbreaking recounting of their trials and triumphs, will have you wanting to hear more. These two remarkable  women who survived the odds and whose  lives straddled two defining centuries in the history of America. Through it all, they held their heads up, to paraphrase Henley's Invictus, "bloodied but unbowed," and emerged proud, and fiercely loyal to their race, their heritage and their country.

BELOW: SCENES FROM HAVING OUR SAY-Photos Courtesy Goodman Theatre 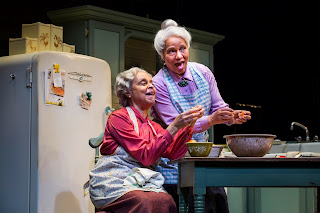 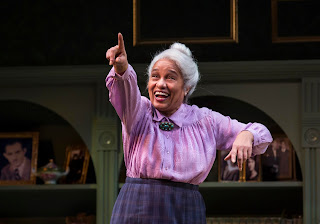 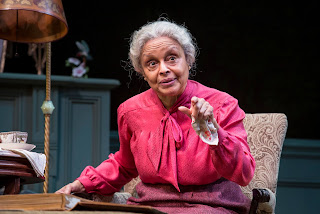 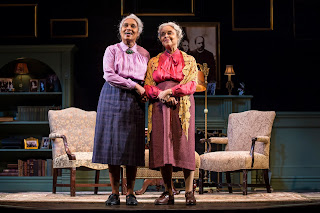 Posted by Dwight the Connoisseur at 11:40 AM